What is River in Poker? 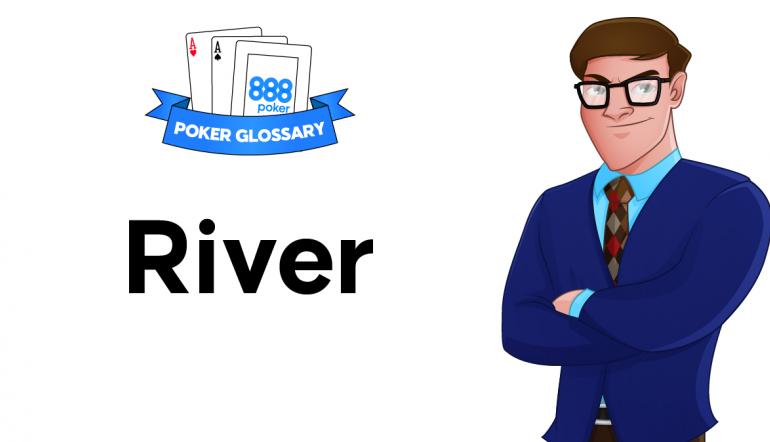 Why is it Called the River in Poker?

In truth, no-one can say for certain, but there are a number of theories. Some believe that since poker was often played on riverboats, cheaters who were caught dealing themselves an extra card would be thrown into the river. Others say this is not true and the term river instead comes from the french word river. Since no-one knows for certain, let’s assume it’s called river because it’s where all the bad poker players drown.

How does the River Work in Poker?

The river is very similar to other betting rounds. One difference is that any players who still remain in the hand after the river action must now reveal the strength of their cards at showdown. In Hold’em, the river card is the fifth community card dealt face up in the centre of the table. In Stud, the river card is a hole card dealt individually to every remaining player.

How to Play the River in Poker?

The most important concept when playing the river is to make use of all of the available information. Up until the river our opponents have taken actions on each street which give us clues regarding the final strength of their hand. Putting all of this information together will allow us to make better decisions than our opponent on average since we’ll have a reasonable idea regarding the types of hands they might hold.

Strategy Advice for Betting the River?

It rarely makes sense to bet a mid-strength hand on the river. We should either be betting strong hands in the hopes of being paid off, or betting weak hands that we are using to bluff with. Medium strength hands run the risk of causing all of our opponent’s worse hands to fold, but all of his better hands to call.

Strategy Advice for Calling the River?

Deciding whether to call the river is based on a poker concept known as ‘pot odds’. We do not necessarily need to win over 50% of the time for calling the river to be profitable since there are already chips in the pot. As an example, imagine our opponent bets $50 into a $100 pot on the river. If we win more than 25% of the time, calling will be profitable in this scenario, despite the fact that we might lose most of the time when calling.

What does it Mean to be Rivered in Poker?

Getting ‘rivered’ means that we lose the pot after our opponent catches a lucky card on the river. The term ‘river rat’ is used to describe a player who is constantly winning pots with lucky river cards.

The river is the street in poker where the most information is available. All of the cards have been dealt and we have seen our opponents’ actions across multiple streets. Experienced players are better at using all of this extra information to their advantage. This means there is a much bigger skill gap between professional and amateur players on the later betting rounds. Using the extra river information well can easily mean a higher win-rate overall. Improve your river bluff-catching skills with the tips in this article.