What is Cap in Poker?

Cap games are a poker format where there is a cap set on the maximum number of big blinds that can be used in a single hand. For example, in a 20bb cap gameonce a player has bet 20bb, he can no longer invest any additional chips into the pot (even if he has additional chips in his stack). The term capped is slightly different and describes a player who can’t have a holding above a certain strength due to the line they took. 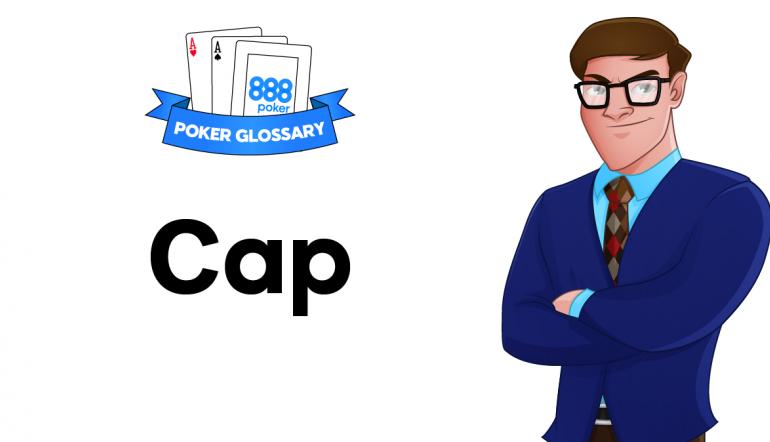 In a cap game, there is a maximum limit on how many chips can be wagered in any given hand. In a 20bb cap game for example, if a player announces he is “all-in”, it means that he is all-in for 20bb. He might even have 200bb in his stack, but 180 of those big-blinds are essentially irrelevant during a single hand of cap poker.

Cap games are somewhat rare. They will occasionally be seen online or in live casinos, but they rarely generate a large amount of traffic.

Capped – Capped ranges occur when a player takes a line that precludes certain strong holdings from being in his range. The easiest example of this is when a player smooth-calls in a spot where he’d likely be raising if he held a premium.

Imagine the following board texture in a NLHE match -

Imagine our opponent faces a continuation bet on such a texture. In most cases, due to the drawy nature of the board texture, strong hands such as sets (and perhaps two-pair) are getting raised, especially in single-raised pots. If our opponent opts to just call on this texture, we can generally assume that he is unlikely to have many hands stronger than a pair of Tens.

Imagine the board texture runs out as follows after our opponent calls both a bet on the flop and the turn.

It’s possible that villain may have held draws on both the flop and turn, but on a blank river, none of these draws complete. It’s highly unlikely therefore, that he has any holding stronger than one-pair. We can hence say that “our opponent is capped at one-pair.”

Example of Cap used in a sentence -> We can definitely bet two-pair for value here because our opponent is usually capped at one pair holdings.

How to Use Cap as Part of Your Poker Strategy

Cap – In order to be an effective cap game player it is necessary to understand how strategy changes at that specific effective stack depth. For example, if we are primarily used to playing 100bb cash games, we’ll need to adjust our strategy if we wish to sit at a 50bb cap table. We’ll likely make significant changes to both our preflop ranges and our postflop lines.

Capped – In terms of poker theory, our opponent having a capped range typically incentivizes us to use larger bet sizings, both as a bluff and for value. In terms of exploitative play, capped ranges require a strategy adjustment specific to our opponent’s tendencies. This could include, but is not limited to, the following.

1. Using large sizings as a bluff hoping to fold close to 100% of our opponent’s range.
2. Using smaller value-bet sizings to elicit calls.

These are just examples however, and the best approach could easily become inverted due to levelling. For example, if our opponent realises he is capped and anticipates us making an overbet bluff, it now becomes a great spot for us to overbet for thin-value. I any situation we hence have to take into account our opponent’s tendencies and figure out how best to exploit them.