What is Check in Poker? 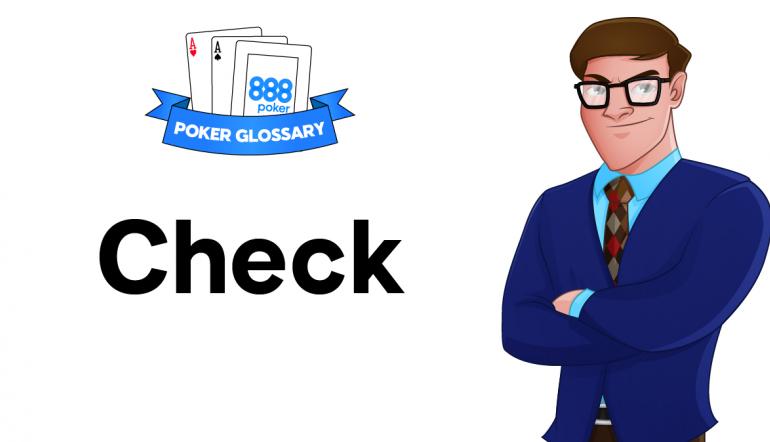 If any player has bet before us on the current street, our options are to call, raise or fold. Checking is not an option, because we must always at least match the previous bet made on the current street. Therefore, checking is not an available option preflop unless we are specifically in the BB. Remember, all other players must at least match the BB’s 1bb preflop posting (or fold).

The term check-back refers exclusively to a check made while in-position. It’s usually possible to spot that someone is not following the action correctly if they describe a check out-of-position as a “check-back.”

Check-to-the-PFR is a term used to describe a check made out-of-position when facing an opponent who took the last aggressive action (raised or re-raised) preflop.

Example of Checking Used in a Sentence → “I checked the flop and my opponent checked-back”.

How to Use Checking as Part of Your Poker Strategy

Checking makes sense mostly when we are looking to keep the size of the pot small. This strategy might imply we hold a marginal or garbage hand. Checking might also be used as a way to deceive or mislead with a strong hand (referred to as Slowplaying).

When is checking a legal option in poker?

Checking is only a legal option in poker when no bet has been made on the current betting round. If there has already been a bet then our legal options are to either call, fold or raise.

Checking is not a legal option for most players on the preflop betting round because the big blind post counts as the first bet. The exception is the big blind who has the option to check preflop if there is no raise from any other player.

When is checking a sign of weakness in poker?

Checking is nearly always a sign of weakness in poker apart from one clear exception. When an out of position player was not the aggressor on the previous street it’s common that they will check to their opponent on the next street. If they are genuinely strong they will usually go for a check/raise rather than a donk bet.

The most common example of this is an out of position preflop cold caller who will generally check the flop and wait to see whether his in position opponent fires a flop continuation bet.

What is the accepted sign for a check in live poker?

Tapping the table twice is the universal symbol for checking in poker. Since tapping twice is quite easy to recognize (and players wouldn’t generally tap twice by accident) tapping twice anywhere (i.e. not directly on the table) is often enough to indicate a check.

What does it mean to ‘check out of turn’?

Checking out of turn means that we tried to check even though it wasn’t our turn to act. Although this can be a genuine mistake it is sometimes used as a type of angle shooting (cheating) so it’s good to try and avoid acting out of turn if we want to be popular with the other players.

What does it mean to ‘check in the dark’?

Check in the dark means to pre-emptively check without waiting to see which cards are dealt. For example, a player cold-calling out of the big blind might announce ‘check in the dark’  before the flop has been dealt. Regardless of which cards fall, his decision to check will now be binding.

There is no strategic advantage gained from acting in the dark apart from the possibility that we might psyche out or confuse our opponents.

For a full discussion on the different legal options in poker, see the glossary entry on Actions.