What is Misclick in Poker?

Misclick refers to a mistake clicking the mouse when playing online poker. It can apply to clicking in the wrong location of the screen or inadvertently clicking at the wrong time. In the world of online poker, a misclickcan potentially cost thousands of dollars. 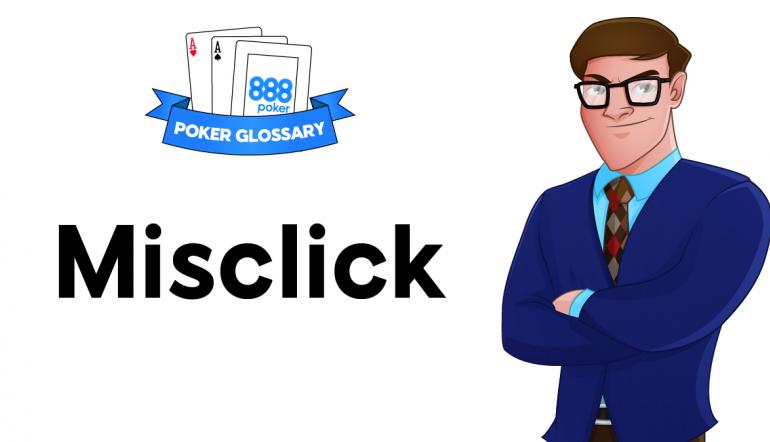 Using a mouse to play poker is doubtless more efficient than manually counting and sliding chips into the middle of a real poker table. However, there are drawbacks – varying degrees of proficiency in using computer hardware can result in players mistakenly clicking in the wrong place. Accidently selecting an option other than the one we wanted is referred to as a “misclick”. The term is most commonly used with reference to a mouse, but it can be extended to included keyboards and game controllers.
Strategy Application
It might appear as if misclicks are simply mistakes and that there is nothing that can be done about them. This is not entirely true. Although to err is human, there are certain steps that can be mistaken to reduce the frequency of misclicks at the table.

For example, are our misclicks caused by any of the following?

Regarding the last point, some misclicks might be caused by active tables jumping to the top of our current table. (“Popup on action” is a common feature offered by online poker clients). We might be about to click an action on our current table when a second table pops up a fraction of a second before we click, causing the misclick on the popped up table. An extreme example could be that our mouse is unfortunately placed over the “all in” button on the popped up table due to the way the table layout is arranged.

Although this is clearly just an accident, such misclicks can be entirely avoided by taking care when configuring the table layout. Some players have found it helpful to disable “all in” buttons also, to decrease the severity of misclicks on average.

Regarding general hardware usage (such as a mouse), our facility with such devices will generally improve over time. We also want to make sure that our device is not faulty/glitchy as this has the potential to contribute to misclick frequency. Some players may simply find they are more suited to either a keyboard or controller than a mouse, and making the switch reduces misclicks. Either way, attention should be directed towards our hardware setup to ensure that our table input is as efficient as possible.

Example of Misclick used in a sentence -> I purchased a new mouse in the hopes that it would help me cut down on mistakes caused by misclicking.