What is All-in in Poker?

To go all-in in poker means to bet all of our chips on a single hand.This would happen either because we decided to bet all-in ourselves or because we are calling an all-in bet (or raise) from our opponents. Once we are all-in we are guaranteed to reach showdown and have a chance at winning the pot. There are variety of different words that players use to describe getting all-in such as jamming or shoving. 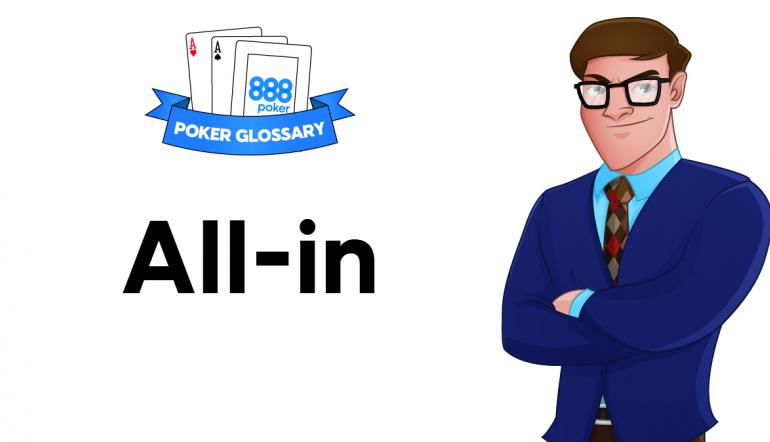 Although going “all-in” places all of a player’s chips into the middle, this does not necessarily imply that they are all at risk. The exact amount of chips being wagered will be defined by the effective stacks. For example -

Although player B may have placed all of his $100 into the middle, he is only risking $50 of his stack because this is the amount player A has him covered for. While we can still describe player B as “all-in”, this does not mean that his entire stack is at risk in this case.

Going all-in does not necessarily indicate who is the aggressor, it’s both possible to raise all-in and call all-in.

Exampe of All-in used in a sentence -> My opponent re-raised me preflop so I decided to shove all-in.

How to Use All-in as Part of Your Poker Strategy

A commonly asked question is “which hands should we go all-in with in poker?” One problem with the question is that it is overly generic. Commitment decisions depend on a large number of variables. However, it’s still possible to make some generalizations regarding whether going all-in is correct or not.

There is $100 in the middle on the river. Our opponent shoves all-in for his last $50. We expect to win the hand 30% of that time when calling. Would a call be profitable here?

A novice player might assume that such a call would be a losing play. After all, 70% of the time after making the call, we’ll proceed to lose the entire pot. However, given that there is already $100 in the pot, we don’t necessarily need to be a favourite for calling to be mathematically correct. Provided we win here over 25% of the time, calling will be a more profitable option than folding. For more information on how such calculations are made, see the glossary entry on pot-odds.

The decision regarding whether to shove all-in as the aggressor is significantly more nuanced and relies on additional variables. As the caller, we need only worry about our pot-equity. As the aggressor, it’s a combination of our pot-equity (when called) and fold-equity (the frequency with which our opponent folds) that determine the expectation (expected-value) of an all-in shove. (Note this does not mean that we can simply add pot-equity and fold-equity together as some strategy sources erroneously suggest).

As a rough guide, the larger the amount of fold-equity and pot-equity we have, the more likely it is that shoving all-in will be the best play. The exact relationship between our fold-equity, pot-equity and expectation can be determined by running an expected value calculation. For more information on this, see the glossary entry on expected value.

It’s not necessary to have both fold-equity and pot-equity, provided one of two variables is sufficiently high. For example, if we have over 50% equity against our opponent’s calling range when shoving all-in, our shove will be profitable even with zero fold-equity (often referred to as “value betting”). Similarly, if our opponent is folding above a certain frequency (referred to as the “break-even threshold”), our all-in shove will be profitable regardless of whether we have any pot-equity when called (often referred to as bluffing). The break-even point on an all-in bluff shove is related to the bet sizing used.

There is $100 in the middle on the river and we bluff-shove all-in for our last $50. How often does our bluff need to work in order to generate profit?

Seeing as this is a river scenario we can safely assume that if our opponent call, he always has the best hand. In other words, we can think of this as a situation where we have zero fold-equity.

Novice players might imagine that we need to win more than 50% in order for our bluff to be profitable. After all, if our bluff fails the majority of the time, what’s the point? We once again need to remember that the amount we can potentially win on our bluff is significantly more than the amount we risk by making it. In the above example we are investing 33% of the total pot ($50 into $150) meaning that if our bluff succeeds more than 33% of the time, bluffing generates a higher expected value than folding.

After playing a particular format for a period of time, players start to develop a “feel” for how wide they should be getting the chips in. These all-in decisions will be appraised by considering variables such as the following.

- The effective stacks. (Commit the chips wider when the effective stacks are shallow).
- The type of opponent we are facing. (Be careful regarding calling all-ins from tight players etc).
- The Stack to Pot ratio. (The more money we commit on the earlier streets, the less likely we are to fold on the later streets).
- ICM considerations (when playing MTTs or SNG’s.

As an example, when playing NLHE it’s rarely considered correct to fold a top pair type hand when playing with 25bb effective stacks or less.