What is Structure in Poker?

Structure typically refers to the features of a poker tournament including level times, blinds, antes, and payouts. It would also refer to any additional features of the tournament such as it being a bounty tournament or a tournament that offers rebuys/addons. Structure may also refer to the distribution of card ranks within our hand. For example, imagine the following preflop hand in PLO; T876. We can describe this as a starting hand that has a gap at the top of its structure. 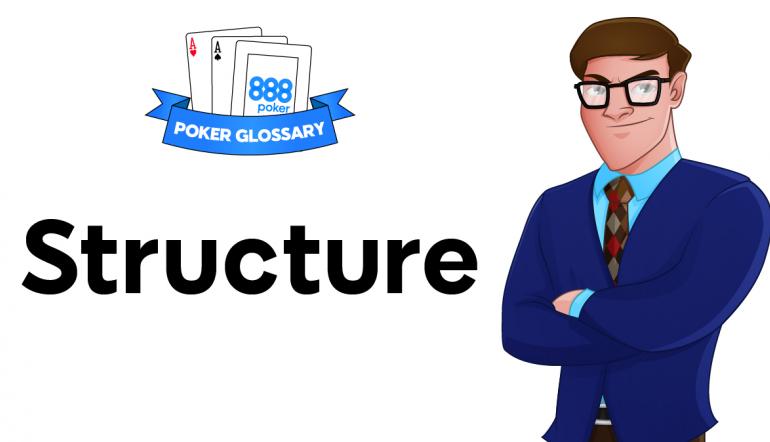 Both cash games and tournaments use three primary betting structures.

No Limit – Players can bet any amount at any given time even if it means betting larger than the current pot size. There is no cap on how many bets and raises can be made on a given street.

Pot Limit – Players can bet up to pot size at any given time, but not larger. There is no cap on how many bets and raises can be made on a given street.

Fixed Limit – Players are forced to bet in fixed intervals using either a small bet sizing or a large bet sizing depending on the street. There is a maximum amount of raises legally allowed on each street, typically one bet and three subsequent raises.

“Structure” as applied to tournaments is a somewhat broad term and can refer to almost any aspect of a tournament’s arrangement. Here are the most common variables.

Level Speed – In tournaments, the mandatory blind payments increase at every level. The time between levels can affect how the tournament should be played along with the overall variance encountered when trying to turn a consistent profit at one specific type of event. Tournaments with very fast blind levels are often referred to as turbos or hyper turbos. Fast blind-structure events are often accompanied with shallower starting stacks. At the other end of the spectrum deep stack tournaments often come with a slower blind structure and encourage players to get involved with more hands on each blind level.

Blind Increments/Antes – The amount by which blinds increase on each level is not identical for every tournament. If the blinds increase by a large amount on each level, it is somewhat similar to playing a tournament with shorter time between blind levels. In most tournaments antes appear on the later blind levels and carry an influence on the types of hands it is correct to play on the first betting round.

Entries – Tournaments range all the way from heads up sit and goes to massive multi-table tournaments with thousands of entries. As a rough guide, the more entries, the larger the amount of variance we should expect when trying to turn a consistent profit in one specific type of event.

Example of Structure used in a sentence -> Deep tournaments start players out with lots of chips along with a slow levels structure.

How to Use Structure as Part of Your Poker Strategy

Fixed limit, pot limit and no limit betting structures are almost entirely different games of poker. A No Limit Hold’em expert should not assume that he will automatically have a good handle on how to play Fixed Limit Hold’em.

No Limit variants are the most complex of the betting structures. The potential size of the game tree becomes significantly larger when a huge range of different bet sizings (including overbets) are possible. The Fixed Limit Hold’em game tree, while still very large, is significantly more accessible in terms of running various simulations. There are generally claims that Fixed Limit Heads Up Hold’em has been solved with the aid of software.

Pot Limit falls somewhere in the middle in terms of complexity, although it generally plays closer to No Limit than to Fixed Limit. This is especially true given that the average No Limit player is not capable of using overbet sizings effectively, so they may as well be playing with a pot limit structure. Although Omaha is usually played with Pot Limit structure, it is often considered as more complex than No Limit Hold’em simply because players are dealt four hole-cards instead of two.

The best play in any specific tournament hand is not solely dependant on the cards and the chip stacks. Identical hands may often be played differently as a result of the tournament structure. Different prize structures result in different types of ICM pressure and differing blind levels might force a player to act sooner than he might have otherwise.

In tournament structures where all finishers receive the same prize (such as double or nothing tournaments) it may even be correct to fold pocket Aces preflop in Hold’em, whereas in winner takes all tournaments, folding Aces preflop can never be correct.

Faster structures also have more stringent bankroll requirements, especially if they are also events with a large number of entrants. In such cases we should expect to go longer without seeing any return on our investment, meaning that a deeper bankroll is required if we wish to minimize our risk of ruin

The above are just generalisations however. Good players analyse the tournament structure beforehand and hit the tables with an appropriate strategy.