What is Probe in Poker?

Traditionally, a probe in poker, is a small bet which is made in order to try and gather information on our opponent’s range. In more recent times, the term probe is slowly changing meaning. Many professional players use the term probe to indicate a “bet vs missed cbet while out of position”. For example, imagine the button open raises in Hold’em and gets one caller. Instead of firing a continuation bet on the flop, the button checks back. If the out of position cold-caller leads the turn, this is referred to as a turn probe bet. 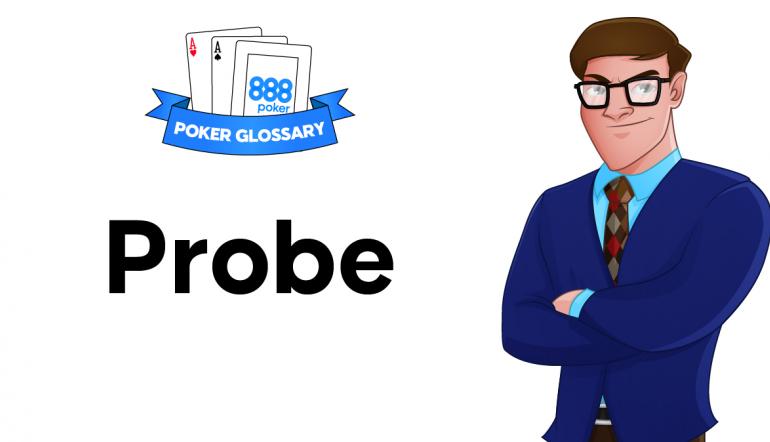 Old-schoolers will be familiar with the traditional definition of probe bet which is “a small bet designed to gather information on our opponent”. They may also be described using the terminology “feeler bet” or “block bet”. The term is rarely used in the modern poker environment. The term “probe” has been re-appropriated to describe another scenario.

Although lacking universal adoption, most serious online professionals recognize the definition of a probe-bet as follows -

Probe Bet – A bet vs missed cbet while OOP.

An in-position bet against a skipped cbet is referred to as a “float bet”. See the glossary entry under float for more information on this topic.

There are two type of probe bet – turn probe bets and river probe bets. Let’s see a quick example of both.

Player A open-raises on the BTN.
Player B cold-calls in the BB.
Player B checks the flop OOP.
Player A checks back the flop IP (as opposed to c-betting).
Player B leads the turn OOP (this is a turn probe bet).

Note in this example that player A had the opportunity to c-bet the flop while in-position but instead elected to check back. When player leads the turn he is hence betting OOP against a skipped c-bet, otherwise known as a turn probe bet.

Example of Probe used in a sentence -> Our opponent checked back the flop so we fired a probe bet on the turn.

How to Use Probe as Part of Your Poker Strategy

With modern technology it is possible to analyse data taken from large sample sizes of hands across entire player pools. Analysis of such data reveals very clearly that the average player folds significantly too often to probe bets.

While a GTO approach to poker might incentivize somewhat low probe bet frequencies, good exploitative play involves the opposite approach. Many of the biggest winners are probing hyper aggressively on turns and rivers since they are aware of the fact that their opponents are drastically over folding.