What is Float in Poker?

Float means to call a bet without a strong holding, hoping to turn the hand into a bluff on the later streets. In more recent times the term float bet has come into common usage. It means to “bet in position after our opponent skips a continuation bet”. The term float bet is often shortened to float leaving us two different situations which are both described as floating. It’s not as complicated as it sounds however, the context usually makes clear what is meant by floating. 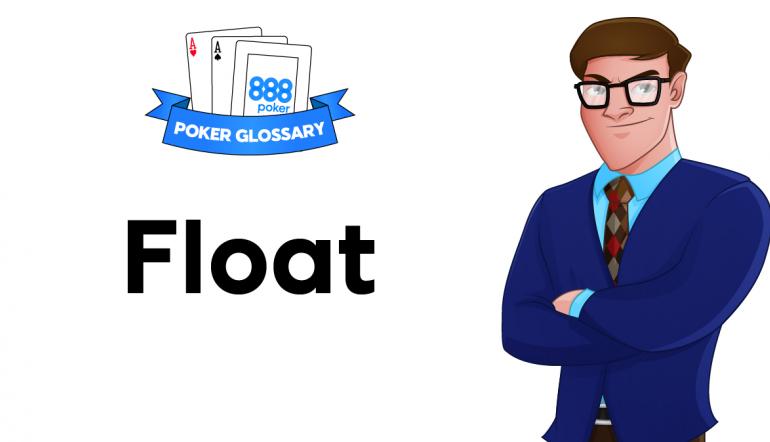 The term floating (calling with a marginal hand hoping to bluff on a later street), has been accepted terminology in poker for well over a decade. Float-betting on the other hand is relatively new terminology scene and is used to describe a scenario where we bet IP (in-position) vs a missed cbet.

Although the term “float-bet” is slowly gaining traction amongst members of the poker community, not all players (especially older players) are familiar with the new terminology. Some explanation might be necessary before launching a discussion on float-betting.

Float-bets can occur in any situation where the PFR aggressor skips a continuation bet OOP (out-of-position). This includes single-raised pots, three-bet pots, four-bet pots and multi-way scenarios across all three streets (flop turn and river). It does not include limped pots since there is no PFR and it is hence impossible for a player to skip a continuation bet.

Example of Float used in a sentence -> The best play is probably to float (call) our opponent’s continuation bet and then stab the turn if he checks.

How to Use Float as Part of Your Poker Strategy

Floating (calling) in No Limit Hold’em

It might be tempting to fold the flop any time we don’t pick up a pair or direct draw. Employing such a strategy would result in us folding far too often to flop c-bets however. Besides, it’s not as if villain definitely has a hand simply because he c-bet the flop – many players are 100% content to c-bet the flop with garbage. It’s hence necessary for the defender to take some of his best “air” hands (usually those with backdoor equity) and “float” (make the call).

Sometimes the defender will get lucky and improve, but for the most part he is calling with the intention of looking for good bluff and semi-bluff opportunities on the later streets. For example, if we call a flop c-bet while IP and our opponent checks the turn, we should often stab (float-bet) the turn IP as a bluff/semi-bluff. Calling both the flop and the turn with the intention of float-betting the river if checked to is referred to as a double-float.

Floating can also occur OOP as well as IP. After an OOP flop float, the floater will usually elect to fire the river OOP after villain checks back the turn. This is not the only bluff option however, there are a number of other bluff-lines that may be considered. Perhaps the floater might check-raise or donk-bet the turn as a bluff/semi-bluff if appropriate.

Float-betting has become an increasingly relevant area of study for poker players. This is in part thanks to the discovery that the average opponent folds significantly too often to float-bets. Although relatively neutral float-betting frequencies may be correct according to theoretical analysis, the biggest winners in poker often have extremely high float-bet frequencies on each street. This is because they are aware that the average villain folds far too frequently and it is possible to exploit this tendency by float-betting hyper-aggressively when given the opportunity.

Closely tied in with this idea is the concept of automatic profit. See the glossary entry on bluffing for a full description. As an example of its application, consider the following -

The average player folds in the region of 55-60% of the time when facing a flop float-bet in a heads-up single-raised pot in No Limit Hold’em. If the player IP makes a half pot bet, then the required success frequency (auto-profit threshold) on such a bluff is 33%. In other words, the bluff only needs to work 33% of the time to be directly profitable with any two-cards and yet it works with a frequency closer to 60%. This is hence an extremely profitable area for strong players to target as an exploit. Furthermore, the average player often folds even more frequently to turn and river float-bets.