What is Rainbow in Poker? 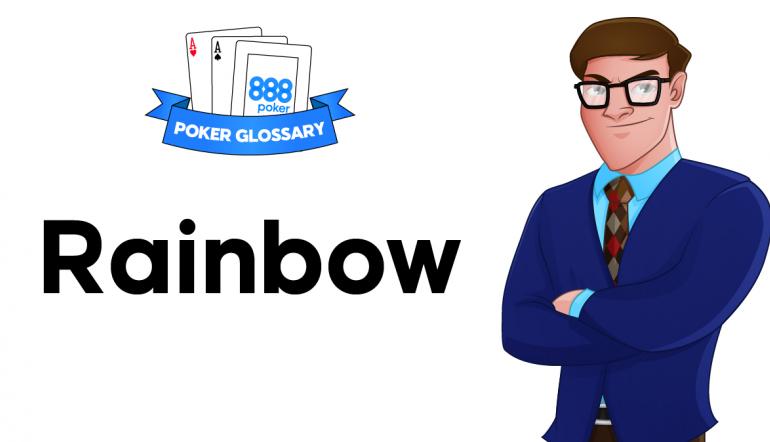 In Hold’em and Omaha players use the following expressions to describe different types of board textures.

Rainbow – Indicates that every card on the flop is of a different suit.
(Can also be used to describe the turn.)

Two-tone – Indicates that two of the cards on the flop are of the same suit.
(Can also be used to describe the turn.)

Monotone – Indicates that all of the cards on the flop are of the same suit.
(Can also be used to describe the turn.)

Ragged – Opposite of “connected”. Implies there is little to no co-ordination between the cards on the board.  “Rag” is also the term in poker used to describe a low uncoordinated card.

Dry – Similar to ragged. Indicates that there is little in the way of flush or straight connectivity.

Drawy – Indicates that there are a large amount of possible straight draws of flush draws available on the board.

Paired – Indicates that there is a pair on the board

Example of Rainbow used in a sentence -> Rainbow flops in Hold’em mean it is impossible for any player to flop a direct flush draw.

How to Use Rainbow as Part of Your Poker Strategy

Rainbow textures are the driest boards, especially if they are also ragged. Mid-range board textures containing two cards between a Queen and Eight may often still be considered drawy even if all three cards of a different suit. (For example T95 should often be considered drawy, even if it is rainbow).

Dry board textures such as K72 rainbow are slowplayed much more often than connected two-tone texture due to the decreased likelihood of our opponent sucking out on a dry board.

Note that the term rainbow could also be employed to describe a starting hand in Omaha where every card is of a different suit. These are usually not the best starting hands – we prefer them to be either single-suited or double-suited.