What is Board in Poker? 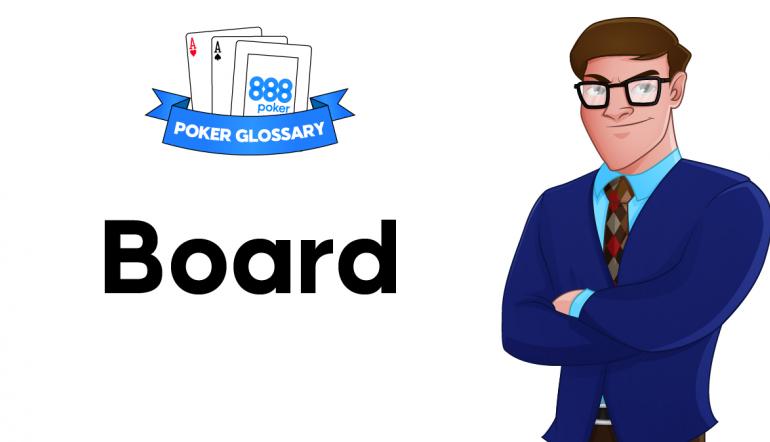 The term “playing the board” can be used to describe a situation where a No-limit Hold’em player does not use any of his hole-cards to formulate a hand. Imagine the board reads as follows:

This is an example where all players at the table are forced to “play the board”. This is because it is impossible to improve on the strength of an Ace-to-Ten straight by utilizing hole-cards.

Playing the board applies mostly to Hold’em, since playing the board in variants such as Omaha is mostly impossible. This is due to the “tight hold’em” rule which forces players to always use exactly two of their hole-cards when formulating a hand in Omaha. On the above board texture, Omaha players would need to have two cards between Ace and Nine in order to make a straight (not including A9xx).

Example of Board used in a sentence -> We open raised preflop in Hold’em and the board came down Ace-high dry.

How to Use Board as Part of Your Poker Strategy

Players may sometimes opt to bluff-catch with board even though stronger hands are possible. For example, imagine the following board texture:

The board gives Hold’em players an automatic Nine-high straight, but this is not the nuts in this instance. Any player with a Ten in the hole-makes a higher straight. A player with garbage might still opt to call a bet from his opponent in the hope that he is “bluffing with the board”. If his opponent turns out to be bluffing, the pot will be split both ways since both players have the 9-high straight.