What is Rebuy in Poker?

Rebuy means to purchase more chips to add to our stack. Rebuying is most commonly performed in cash games, but also makes an appearance in specific tournament formats. Rebuy tournaments allow players to purchase (rebuy) a new chip stack after running out of chips, but only while the rebuy period is still active. 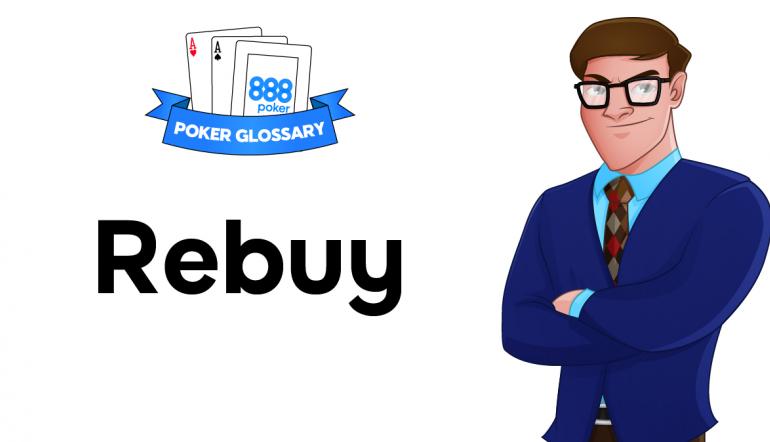 In most cases rebuying additional chips is only an option a cash game. In cash games players are free to add chips to their stack or cash out at any time (apart from when involved in a hand). In tournaments, rebuys are typically not permitted, although there is a special brand of tournaments known as “rebuy tournaments”, where players are permitted to replenish their stack (after going broke) for a period of time. Once the rebuy period is over, rebuys are no longer permitted; if a player loses his stack, he is out of the tournament.

Example of Rebuy used in a sentence -> Many online cash game players like to rebuy as soon as their chip stack drops below 100 big blinds.

How to Use Rebuy as Part of Your Poker Strategy

Should we rebuy in rebuy tournaments?

Generally, the answer to this question is no, although there is some measure of debate along with some obvious exceptions.

We can generally answer this question (at least in general terms) by utilizing a thought experiment. Imagine an infinite amount of identical (regular) tournaments with the same buyin cost. Player A sits down at the beginning of every tournament while player B always joins the tournament after the fifth blind level. Assuming both player A and player B have equal skill, is their long-run expectation equal?

The majority of players would understand that player A has an advantage since he is routinely playing more hands than player B. Any time we rebuy in a poker tournament after busting, the expectation of the subsequent rebuy is hence lower than that of the initial buyin, similar to player B’s expectation in the thought experiment. We hence maximize ROI by buying in just once at the very beginning of the event.

However, there are some obvious exceptions as to why players might consider it +EV to rebuy despite the fact that it clearly does not maximize long-term ROI.

1. We are playing a live tournament which involves significant travel expenses.

2. It’s a once-in-a-lifetime live event. If we don’t rebuy, we’ll never get another shot.

3. We are an online player but we want to maximise our volume and hourly rate, even if it means taking a small hit to overall ROI.

Although it’s commonly imagined that the goal of a professional is to maximize their ROI (or winrate), the truth is that good players should usually be mostly concerned with maximizing their hourly rate. It’s easily arguable that rebuying can increase hourly rate in a number of different scenarios since it potentially allows online players to play a larger amount of tournament tables at one time.

Unlike tournaments, rebuying in cash games is generally consider standard practice. Rebuying allows us to play as close to our desired stack depth as possible. (While we’d be equally skilled at all stack depths in an ideal world, the average poker player has a skillset most applicable to playing at 100bb effective. Most professionals hence rebuy to 100bb if their stack drops below this).

How do rebuys work in tournament poker?

How many times can I rebuy in tournament poker?

Many tournaments have no limit on the number of rebuys that are allowed provided that the rebuy request comes within the rebuy period. Once the rebuy period is over, no further rebuys are allowed. Sometimes a tournament might stipulate a limit on how many times a player can rebuy, but allowing unlimited rebuys is more common since this helps to boost the overall prize pool of the tournament. Note that not all tournaments are rebuy tournaments, meaning that it will not always be possible to request a rebuy.

How do rebuys work in cash games?

In cash games, players may rebuy at any point, regardless of whether they have run out of chips. (Tournament players are only given the option to rebuy once they have lost their entire stack). It’s therefore common for cash game players to rebuy additional chips once their stack starts to dwindle. There is usually an upper limit to how many chips a player can rebuy. For example, if the maximum buyin for a table is 200bb, a player would not be able to rebuy chips if it put his total stack depth over this amount.

When should I rebuy in a poker cash game?

It’s a common strategy to rebuy to a specific amount of chips any time our stack drops under it. For example, every time our stack drops below 100bb we rebuy chips to bring our stack depth back to 100bb. This is done because correct strategy can change significantly depending on the stack depth. Many players invest time into learning how to play well with 100bb stacks and therefore want to spend as much time as possible playing at that stack depth.

Auto-rebuy is a feature that is available in online cash games. Any time a player’s stack drops below a certain number of big-blinds, the software automatically rebuys chips to return the player to the desired stack depth.

Although live players might potentially prefer to rebuy every hand, it’s somewhat impractical since there is no way of automating it. As such, live players typically wait a little longer before replenishing their stack (perhaps even waiting until they go broke).