What is Slowplay in Poker?

Slowplaying is the act of playing a strong made hand in a passive manner for the purpose of deception. Passive play is characterized by checking and/or calling as opposed to betting/raising which is referred to as fastplaying. The hope is that our opponent may decide to launch a big bluff at the pot or not give our bets and raises credit on the later streets. 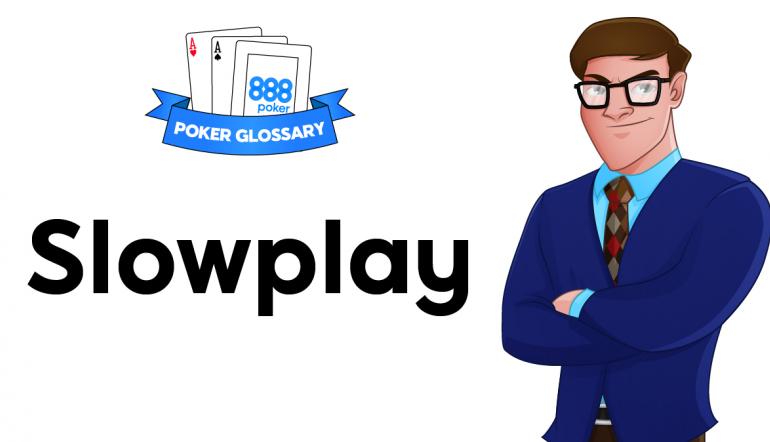 Deception is an important component in poker strategy. The only thing better than having a strong hand is having a strong hand in a situation where our opponent is convinced that we have nothing.
Rather than raising or betting at the first given opportunity, the slowplayer uses passive lines i.e. checking and calling, to represent that he is weaker than he really is. The plan involves hoping that our opponent either resorts to making big bluffs on the later streets, or decides not to give us credit when we finally change gears and start raising.

Example of Slowplaying used in a sentence -> A common leak that new poker players have is slowplaying their big hands too frequently.

How to Use Slowplay as Part of Your Poker Strategy

In the majority of situations, slowplaying will not be correct. Usually, the most profitable approach with strong made hands is simply to come out betting and raising, attempting to build the pot as fast as possible (referred to as fastplaying).

Many players obsessively slowplay because they feel bad when their opponent folds rather than paying off. Just because our opponent sometimes folds does not automatically mean that slowplaying is a better option in the long run.

There are two key problems with slowplaying -

1. We allow our opponent to outdraw us cheaply if our hand is somewhat vulnerable.

2. We miss opportunities to grow the pot and miss value.

While No Limit players still retain the option to overbet on later streets, Pot Limit and Fixed Limit players do not, making slowplaying especially problematic.

If unsure, it is recommended to avoid slowplaying, but this is not to say that slowplaying will never be the correct option. If the following parameters are in place then slowplaying can be considered.

1. Our hand is invulnerable. (Don’t slowplay holdings which can be easily outdrawn).

2. There is a specific incentive. We have a decent read that our opponent will bluff the later streets, or pay off significantly wider when we under-represent the strength of our holding.

It’s important to remember that even a small bet on an earlier street can have a big impact on the final size of the pot by the river (since the pot grows exponentially in pot limit and no limit formats). Slowplaying is not a good default option; it should only be utilized when we have a specific read on our opponent.