What is Read in Poker?

Read in poker is often used interchangeably with the word “tell”. It’s an indication that our opponent has a certain type of hand based on how he is acting and what we know about him so far. The term read can also be used in a more general sense to refer to looking at the available cards to determine what type of hand we have. The term hand reading refers to the act of putting our opponent on a range of holdings and narrowing that range as the hand progresses. 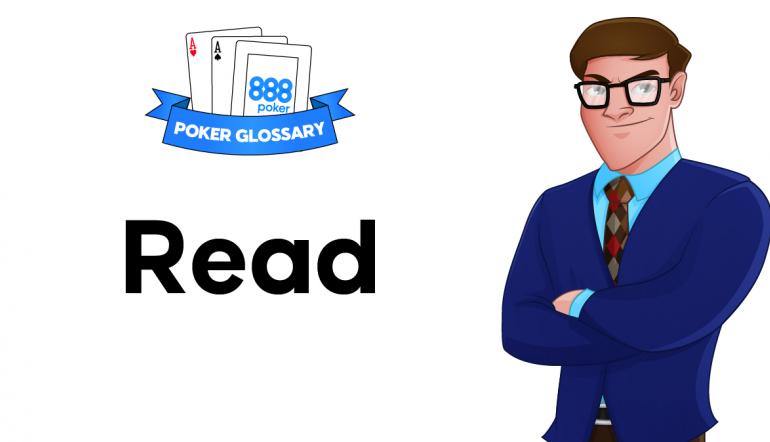 The term “reads” is often used interchangeably with “tells”.

Example of Read used in a sentence -> We had a read that villain likes to triple barrel bluff a lot on Ace-high textures.

How to Use Read as Part of Your Poker Strategy

“Hand reading” most commonly refers to putting our opponent on a “range” of hands, where “range” refers to the entire group of possible holdings that villain may hold. It’s rare that we know the exact combination of cards that our opponent holds, so good players base their strategic approach on their opponent’s range rather than attempting to guess his specific holding.

The process typically involves starting with a wider range of possible holdings and narrowing this range as more information comes to light. By the time we reach the river, it will be likely that our opponent holds one of a few different types of hand. By making the best play against villain’s entire range we maximise our expectation in the long run. Popular media (such as films etc) portray hand-reading as a mystical process where one player looks into another player’s eyes and “just knows” exactly which cards he is holding. By contrast, strong professionals understand that hand-reading is not a product of divination, but rather a logical process of deduction. See the glossary entry on range for more information on the topic.

Less commonly ‘hand reading’ refers to establishing the exact strength of the cards we hold (including all relevant draws and redraws, not just the absolute strength). While this is a relatively trivial exercise in variants such as Hold’em, it becomes more complex in Omaha variants, especially Omaha high-low split. Having a strong awareness of the exact type of hand we hold (including backdoor equity) has a much steeper learning curve. As an example, even relatively experienced PLO players may fail to identify how many nut and non-nut outs a certain flopped wrap has. Even players who understand wraps well may lack awareness regarding which type of backdoor wraps they have available on the flop.

“Reads” or “tells” are traditionally a very big part of poker, and still play a large role in decision making at the live tables.  For a more detailed breakdown on the types of reads we might pick up on our opponent, see the glossary entry under tells.