The Dead Man’s Hand is probably one of the most well-known hands in poker. Find out the history behind this famous hand and how you should be playing it. 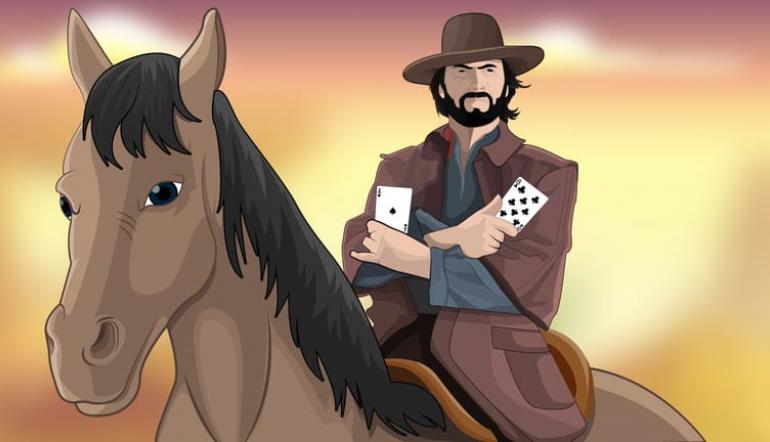 What is the Deadman’s Hand? How did it get that unique name? The hand is generally regarded as two Aces and two Eights – AA88 – a nice two pair. But there is much more to this hand.

For our story about the history of dead man hand.

There is a deep history behind it that traces the game’s roots to the Old West. Poker has a deep background and the story of Deadman’s Hand remains makes it a unique beyond the cards on the table.

Those two Aces and Eights derive from a game involving famed lawman “Wild Bill” Hickok. He was shot dead at a poker table more than a century ago holding that hand. Since then the hand has been branded “Dead Man’s Hand”. The lawman remains a legend of American Old West and gambling lore.

His demise remains a poker story told at tables around the world among players.

The Story Behind the Hand 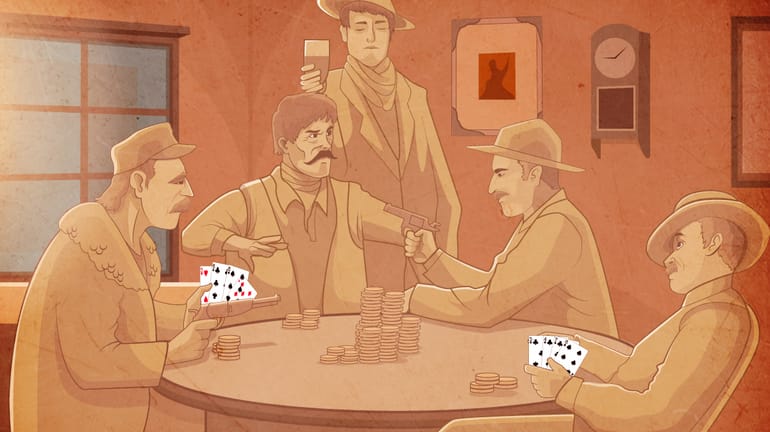 Dead Man’s Hand dates back to the Old West saloons

Born in Illinois in 1837, Hickok was a lawman, gambler, gunslinger, folklore hero, and actor. He spent much of his life shooting it out with criminals and arresting outlaws. Buthe also spent a large amount of his time subsidising his income with poker winnings.

Later in life, Hickok moved to Deadwood, located in the Black Hills of the Dakota territory. The region wasn’t a state yet, and the lawman was suffering from glaucoma and other ailments. He planned on settling in the mining town to play poker and earn his living.

On Aug. 2, 1876, Hickok was in a Five Card Stud game at Nuttal and Mann’s Saloon. Card rooms at that were what one might expect from the Old West. There was probably plenty of cigar smoke in the air and plenty of whiskey being drunk. As the cards made their way around the table and chips tossed into the pot, a gambler named Jack McCall slipped into the saloon. McCall made his way to the bar and moved behind Bill where he couldn’t be seen. McCall raised his pistol, steadied his aim out of sight of the game.

He fired right in the back of Bill’s head.

Whether Hickok held that hand has been debated for years, but the tale remains as does the hand’s name.

No one is quite sure why McCall committed the murderous deed, but theories abound. Those ranged from a perceived personal slight when Hickok told McCall days earlier to quit playing until he could pay his gambling debts. The allegation also swirled around that Hickok shot and killed McCall’s brother.

The hand has become synonymous with poker and an iconic tale of the Old West. A jury of minersacquitted McCall. But later  the federal government tried him again and found him guilty of murder. He was hung on March 1, 1877.

Wild Bill Hickok was much more than a gunfighter. He was a gambler and poker player. That background combined with his role as a lawman has attracted many fans through the years. Early in his life, Hickok was a hunter, trapper, spy, soldier, military scout, and sharpshooter.

“Whether on foot or on horseback, he was one of the most perfect types of physical manhood I ever saw. His skill in the use of a rifle and pistol was unerring.”

Quite a man’s man, Hickok was remembered as tall, handsome, admired by quite a few women. Wild Bill as a character, whether real or fictional, has been a major part of American pop culture for decades – including Dead Man’s Hand.

Throughout the late-19th Century and early-20th Century, pulp novels and magazines offered tales of real-life western heroes and outlaws like Hickok,

Billy the Kid, Wyatt Earp, and Jesse James. Wild Bill stood out as a former Marshall and sheriff who also could dominate a poker table.

Avon Periodicals published Hickok comic books throughout the ‘50s, featuring his exploits throughout the west. As an example, issue No. 12 featured the lawman battling a band of outlaws on the cover. The comic trumpets the battle by telling readers: “Don’t miss the flaming hot tale of hot lead.”

Separating truth from fiction isn’t easy. Many other stories and tales followed Hickok’s death in 1876 – including radio, television, and the silver screen. Guy Madison played Bill in the TV series “The Adventures of Wild Bill Hickok” for seven years in the 1950s. He also starred in a radio series from 1951–54. Josh Brolin played the hero in the television series “The Young Riders”  from 1989-92.

Josh Brolin in the television series “The Young Riders”

In the movies, Hickok has been played by Gary Cooper, Roy Rogers, Robert Culp, Charles Bronson, Jeff Bridges, Sam Elliot, and more. Moe Howard even played a version of the hero named “Wild Bill Hiccup” in a 1937 episode of TheThree Stooges.

One of the most recent portrayals of Wild Bill and his death holding that famous hand came in the popular HBO series Deadwood. The award-winning series ran three seasons from 2004-06. It tells the story of the settlement as it transitioned from mining camp to a small town. Eventually, it became part of the U.S. territory and later part of South Dakota.

Set in the 1870s, the series gave viewers a real-life look into the Old West. It portrays life in this unique town located in the Black Hills of South Dakota. Deadwood captured a place where a gold boom sparked industry, ruthlessness, plenty of drunkenness, and even murder.

Plenty of miners with newfound money in their pockets were looking for a place to gamble and play cards. The saloons in town offered those opportunities – perfect for a skilled player like Wild Bill Hickok.

What made the series unique is how it weaved real life characters like Hickok (played by Keith Carradine) and Calamity Jane into the story. The script included gambling and poker as a regular backdrop. The inaugural season included a fictionalised history of Hickok. It followed his move into town as a well-regarded gunslinger and lawman to his life as a poker player.

McCall’s murder of Wild Bill at the poker table is a key plot line in the series’ first season. It offered a bit of Wild West poker history to a modern audience. In May 2019 HBO released a Deadwood film to tie up some loose ends from the series.

The story of Dead Man’s Hand has also been featured in numerous pop culture references. They include Batman cartoons, video games, board games, novels, and much more.

George R.R. Martin, author of Games of Thrones, even has even titled one of his fantasy books as Dead Man’s Hand.The music artist and DJ Kshmr even produced a song with the same title in 2015. There is even a motorcycle club named Dead Man’s Hand in the US.

Maybe most fittingly, a bottle of Dead Man’s Hand whiskey can be had for around $30. The small-batch booze has won several awards. Dead Man’s Hand has also lent its name to Belgian and American beers – both imperial stouts to be exact. The name has been used for rum as well.

Most Dead Man’s Hand and imagery harks back to the hand’s deadly origins – the playing cards, guns, skulls, and a bloody red colour.

It’s safe to say the legend of Dead Man’s Hand is remembered and appreciated by many outside the world of poker.

How to Play Dead Man’s Hand

In a game of Texas Hold’em, Ace-Eight may only be a marginal hand. How to play it will vary depending on the player. A player in late position might make a call or even raise if there are no callers in front of him. Other players might send it to the muck, especially if players behind have large chips stacks.

If there is a raise in front, most players will probably fold A-8 depending on their reads of these players. Playing this hand after the flop can also be tricky. If the board completely misses, with a flop like K-10-2, a player will be left to bluff or check. Ultimately it might be wise to let it go with an opponent’s bet on this board.

But even if an Ace hits the table on the flop, a player is in a bit of limbo. It doesn’t take much to get outkicked because of that weak 8. A reraise will have a player stuck in limbo about whether to make a call.

Landing both an Ace and Eight on the board, giving a player the Dead Man’s Hand, can often bring a nice pot.

Bluff-Catching with the Dead Man’s Hand

This hand might also be used to catch some players in a bluff during a fun home game or even at a table in Las Vegas. Players also looking to bluff with a middle pair on a board featuring an Ace-Eight combination of some sort may be in trouble.

If you have A-A-8-8 and suspect an opponent with a hand like these, or even a draw, your Dead Man’s Hand is in good shape. It has a chance to win a considerable number of chips.

The Basics of Five Card Stud

In the game Hickok was playing back in 1876, Five Card Stud, a pair of Aces and a pair of Eights was a premium hand. Dealt like Seven Card Stud, but with only five cards, the game offered some nice returns for such a hand.

Being dealt two big pairs out of only five cards was a nice turn of luck. Hickok probably had his eyes set on a nice pot – especially if they split with one Ace and one Eight in the hole.

With his opponents not seeing a pair among his upcards, Hickok had a much better chance of keeping other players in the game.

Dead Man’s Hand is one of the most iconic hand in poker. It harks back to the game’s roots in the American West and a real legendary lawman.

Hickok probably spent more of his time at the poker table than in the sheriff’s office.

Hickok was inducted posthumously into the Poker Hall of Fame in 1979, the year of its inception. He remains an icon of American history.

Ace-Eight can be a tempting hand, but beware. Hopefully, your fate ends up much better than Wild Bill’s.