How to Play 4 Card Poker

If you’ve ever been in a casino to play poker, be it a tournament or cash game against other players, you might have taken a stroll through the gaming pits. It’s there you’ll see popular casino games like blackjack, roulette, and craps, just to name a few. 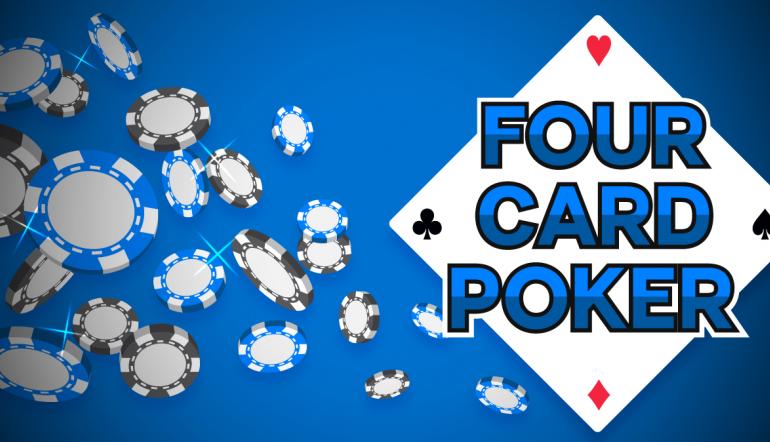 If you’ve ever been in a casino to play poker, be it a tournament or cash game against other players, you might have taken a stroll through the gaming pits. It’s there you’ll see popular casino games like blackjack, roulette, and craps, just to name a few.

It’s also there you’ll find other casino card games, many centred on poker. Case in point – Four Card Poker, which was invented by Roger Snow and operated by Shuffle Master. Unlike many forms of poker, Four Card Poker isn’t played against other players. Instead, each participant squares off against the house.

The hands rank the same as in other poker games.

From lowest to highest they are – 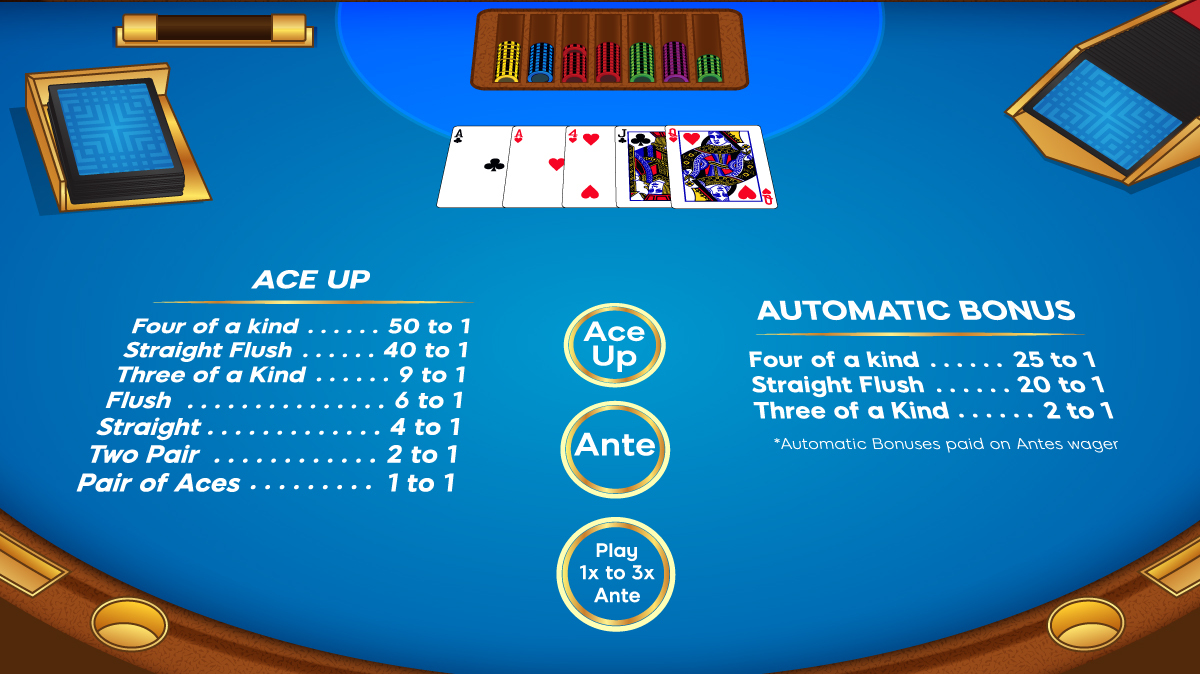 There are two different bets in Four Card Poker – the ante bet and “aces up.” You have to place a bet on at least one of them. You are also allowed to place bets on both. Aces Up is a side bet wagering that your hand will contain a pair of aces or better.

Here’s a look at some standard Four Card Poker Aces Up bonus payouts:

If you fail to make a pair of aces or better, you lose your Aces Up bet. The Aces Up bet is independent of the ante, meaning it won’t matter what the dealer has. You’re simply betting on the strength of your individual hand.

After a player places their ante bet, they look at their cards. They should then survey the dealer’s lone up card. Next, they need to decide whether they want to play or forfeit.

If the latter, they push their cards to the dealer and sacrifice their ante bet. If they want to play, they must then place a bet on the “Play” spot.

This format is unlike its Three Card Poker counterpart, which only allows for the play wager to be equal to the ante. In Four Card Poker, players can bet up to three times their ante.

If your hand goes on to beat the dealer’s, you will receive a 1 to 1 payout. If a tie occurs, the player wins.

The ante wager is also subject to a premium hand bonus:

In the extremely rare instances where the dealer beats one of the above premium hands, you still get paid!

If you place both ante and Aces Up bets and opt not to place a “Play” wager, you will forfeit the ante, but the Aces Up bet stands.

Once all wagers are made, action closes. The dealer then reveals all their cards and selects the best possible 4-card combination from their six cards.

A lot of casino card games require a qualifying hand for the dealer to play. For example, in Three Card Poker, the dealer must have queen-high or better to qualify. If they do not, a player’s ante bets are paid 1:1, but the “Play” wagers are returned.

The good news - you don’t have to worry about all that in Four Card Poker. There is no qualifying requirement.

Each hand plays, which means you’ll always be in action if you so choose.

Some casinos offer a Multi-Link Progressive Wager in their casino card games. This deal extends to the Four Card Poker tables. It’s usually done in the form of an optional $1 side bet where you aim to make Three-of-a-Kind or better to get paid.

If you’re lucky to make a Royal Flush, you’ll win the jackpot, which is most times either five or six figures.

If you do make a Progressive Wager, chances are you’re eligible for an “Envy” bonus. (Be sure to check with your casino to make sure this is the case.) You’ll get paid if another player at the table makes either a Straight Flush or Royal Flush.

For the former, you’ll usually receive $300 and for the latter $1,000, though sometimes it is even more!

The strength of your hand will speak for itself in Four Card Poker. For “Aces Up,” you simply table your hand and see what you have. Simple as that.

When you make an ante wager, the only strategy centres two decisions –

If you’re a slightly more experienced, you might refine your strategy a bit. For example, you have a pair of face-card like jacks, queens, or kings. You might only bet 3X when the dealer’s exposed card is lower than your pair. If it’s bigger, like an ace, you might consider lowering it to either 1X or 2X.

The key is to consider your five hole cards, and the dealer’s one up card carefully. For instance, the dealer is showing a king, and you have a pair of kings in your hand. Chances are he won’t make a pair of kings.

With that knowledge, you can more confidently make a 3X play wager.

Like all casino card games, the house always has an edge. In Four Card Poker, that edge comes in two forms –

Knowing this, gamble responsibly and try to have fun. Four Card Poker is an excellent game for poker aficionados!

For our web story about 4 cards poker.