When Should You Go All-in in Poker?

Follow along as we discuss the times when you should be pushing over the top - moving all your chips all-in into the pot. 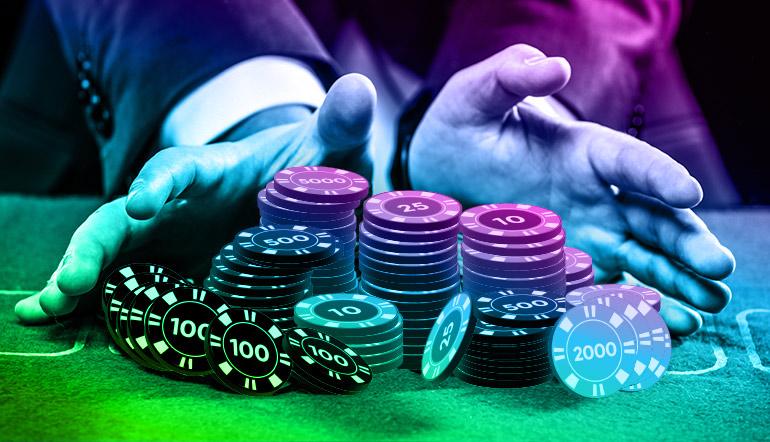 When to go all-in in poker? This is a common question, but also one that’s difficult to answer. After all, risking everything shouldn't be simple, right? Since there are so many ways of getting our chips into the middle, it's not for nothing that the expression "all-in" transcends poker. We’ll discuss some general over-riding principles as well as look at a couple of more specific scenarios. In poker, obviously

Before we do that, let’s just clear up a few of the poker rules which surround all-in confrontations.

Rule #1 – Table Stakes – The table stakes rule says that a player can’t be forced to wager more than he has brought to the table. In the past, it may have been possible for richer players to bully poorer players by betting amounts so large that no-one would be able to call, even if they wanted to. A refusal to call would have been considered equivalent to folding, and the rich player becomes even richer.

Nowadays, even if our opponent shoves in for $1,000 and we only have $50 left in our stack, we retain the option to call. Of course, we only stand to win $50 from our opponent’s stack, but he can no longer force us out of the pot by betting an amount we physically can’t call due to lack of chips.

Rule #2 – Side Pots – Side pots are created exclusively in multi-way scenarios where one player is all-in, but the remaining players are battling out for additional chips.

Let’s imagine a three-way all-in between the following players.

Note firstly that player C can only ever invest $100 on this hand. No-one has enough chips to give him action for the remaining $100. In an online environment, he can still shove all that $200 into the middle, but the additional $100 is irrelevant and won’t influence the action.

Player A is only investing $25, meaning that he is only entitled to win $25 from each of his opponents’ stacks. Any betting above this amount will occur as part of a side pot.

To see how this works, let’s imagine player A has the best hand, player B has the 2nd best hand, and player C has the worst hand.

Player A has the best hand; he wins the $75 main pot.
Player B loses the main pot to player A, but he wins the side pot against player C for $150.
Player C gets nothing (apart from his extra $100 back).

Poker All-ins – When to Commit

Now that we have the rules out of the way, let’s talk strategy. We’ll outline some general rules for getting our stack all-in.

For poker tournament players, things can sometimes be a little bit different. It’s possible to get the pot-odds on a call, but the call can still end up being incorrect due to ICM considerations. Sometimes it’s more important to conserve our stack based on the tournament structure. Tournament players might want to search for information on “ICM” to understand better how this impacts on their calling decisions.

Making an All-in – As a very rough guide, being the aggressor in poker is better than being the caller. When we shove as the aggressor, there is always the possibility that our opponent folds. It’s a combination of our fold-equity and our pot-equity when called which determines our expectation. There is no simple calculation for this, but we can increase our efficiency here by learning to run EV calculations and using tree-building software such as Cardrunners-EV.

It’s especially profitable to exploit players who fold too much. A player who calls too many all-ins on the earlier streets is undoubtedly exploitable, but they are somewhat protected by the fact that they will always get to fully realise their equity.

An example of this can be seen when considering 5bet shoves preflop with 100bb effective stacks in cash games. If our opponent never folds to 5bets, we can usually expand our jamming range slightly. In late position, this might sometimes mean that we can add holdings as weak as 88, or AJs to our jamming range against a 25bb 4bet. (It naturally depends on the width of villain’s 4betting range).

However, once our opponent starts folding noticeably above 50% of the time to our 5bet, we quickly reach the stage where it becomes correct to 5bet shove any 2 cards when facing a 4bet. So, in many cases, we can get the stacks in wider against someone who folds too much than against someone who calls too much.

There is naturally a lot more involved than simply considering who is the aggressor and who is the caller. We’ll now list some of the other important variables in deciding whether to commit our stack.

SPRs or “stack-to-pot ratios” are slightly different from stack depth. SPRs describe the ratio of chips in the pot to the chips in the effective stacks. (For example, if we have $400 in our stack, and there is $100 in the middle, we have an SPR of 4).

They provide a model for commitment decisions, which takes into account how “bloated” the pot is on the flop. We might be able to get away from TPTK (top-pair-top-kicker) in a single-raised pot where the SPR is high (around 15). However, it might be incorrect to get away from TPTK in a 4bet pot where the SPR is in the 1.5 region - even though we might have identical effective stacks in both scenarios.

Another way of expressing this concept is as follow: the larger the number of chips we have invested preflop, the less correct it will be to fold postflop.

Type of Opponent – We don’t want to be making commitment decisions based purely on the SPR and the type of hand we have. Poker is a game of people, and our all-in decisions should be heavily adjusted based on the kind of opponent we are facing.

If our opponent is exceptionally tight and will only get the stacks in with extremely solid holdings, we want to be very careful about calling his all-ins. A certain holding might seem like a correct all-in based on our knowledge of SPRs, but we want to retain the ability to ignore that and make the best exploitative decision.

As mentioned previously, aggressive all-in decisions are especially useful if our opponent is folding too often. Even if he is calling too often against shoves, we can exploit this by widening the range of hands we use as value-shoves. In the 5bet example we considered, we couldn’t expand our 5bet range significantly against a non-folding opponent.

This fact was because a) we assumed his 4bet range is reasonable and b) he has more equity preflop than he would have on later streets. Expanding our value-shoving range becomes especially profitable on later streets where our opponent has less equity left to realise.

This situation is especially true on the river where our opponent may be content to call a wide range of zero-equity holdings against a jam. (Zero equity because the worst hand can never improve after the river card has already been dealt).

Previous Action – Some all-ins represent more strength than others. As best as possible we want to analyse whether our opponent’s line checks out. Does he have the hand that he is representing? Our ability to figure this out will increase as we become well versed with different trends exhibited by the player pool.

For example, a common question many players ask is whether it’s ok to fold overpairs in 3bet pots with 100bb effective stacks. One reason why the question is so prevalent is because there is no simple “yes” or “no” answer to this. It depends on several variables.

One of those variables is the size of our opponent’s flop raise after we bet the flop. Analysis of the player pool shows a strong trend towards small flop raises being stronger than flop all-in shoves. Many players might not realise this without knowledge of the environment. After all, it seems logical to assume that a larger raise is always stronger than a smaller raise on average.

It may hence often be correct to call our overpair vs a flop jam, but to consider folding our overpair at some point before the river after our opponent utilises the small flop-raise line. Of course, the GTO style answer is somewhat different. According to GTO poker, we should basically never fold overpairs in 3bet pots with 100bb effective stacks. This factor matters relatively little, however. We should primarily be interested in generating strong exploits based on our knowledge of what different lines represent.

Relative Hand Strength – Following some type of commitment system based on absolute hand strength can be problematic. For example, imagine we had an all-in rule where we never fold a set with 100bb effective stacks.

Look at the following hand:

It’s true that we have a set, and it might be true that we are playing with less than 100bb effective. But we should be able to see immediately that there are some serious problems with our set on this board texture.

Although the absolute strength of our hand is strong, it’s extremely weak in the relative sense. There are a variety of different ways that our set can be dominated, and we should be mostly able to avoid all-in confrontations despite our general reluctance to fold a set with 100bb effective. 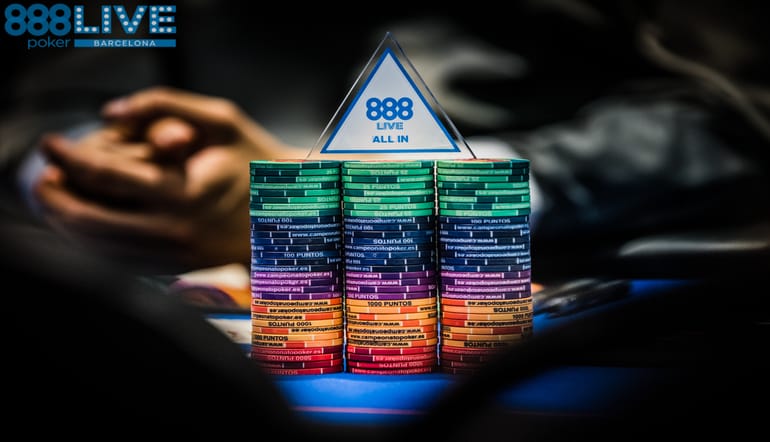 As we have seen, there are no hard and fast rules for whether we should commit our stack in a given spot. Each situation needs to be weighed up individually based on the relevant variables.

Here is a quick recap of the points we have addressed:

All in Strategy - FAQ

Question 1: What does it mean to go all-in in poker?

To go “all-in” in poker means to place all of our remaining chips into the middle of the pot. This can either happen fby making a bet ourselves, or calling a bet from our opponent.

Question 2: How does going all-in actually work in poker?

Players may never invest more than what is currently in their stack. If our heads-up opponent has less chips than us and we call his all-in shove, we are still described as being “all-in” despite the fact that we technically have some chips left behind.

Question 3: Why would we want to go all-in in poker?

Two main reasons. Either we have the best hand and want to increase the size of the pot, or we are running a big bluff and hope that our opponent folds.

Question 4: When should we go all-in in poker?

When facing an all-in shove, the only thing that matters is the pot odds we get when calling. As the aggressor, we’ll either be shoving all-in because we have a strong hand or because we think our opponent is folding too frequently.

Question 5: When should we go all-in in a tournament?

There are slightly different rules in tournaments compared to cash games. Depending on the tournament payout structure it may even be correct to fold AA preflop in certain scenarios. As a rough guide, the shorter our stack, the lower the hand requirement for getting all-in.

Visit our web story about all in poker.