Can Aces Hold Up in Multi-Way Pots?

Poker might be a lot easier when it’s you against a single opponent, but that’s not always how it goes down. What should you do when a pot becomes a party? 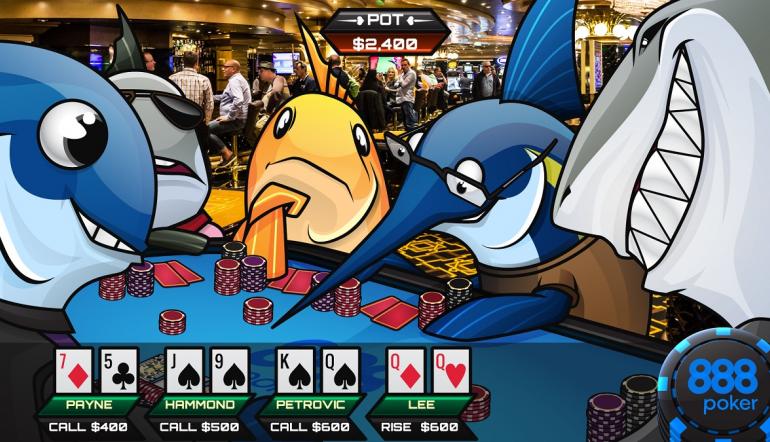 1. How do multiway pots differ from heads-up pots?

The key difference is with odds calculations. When you’ve got Aces heads-up you know you’re in great shape, but when you’re in a multi-way pot your position is a lot more precarious. Say the blinds are 25/50 and you raise to 150 with Aces; if the person next to you calls it can start a limp-fest with other players entering for value. If one person calls with Tens, the next person might call with 8c-9c, and then the button could call 6h-5h. So it’s easy to see how there can be a huge range of hands going to the flop, especially in the early stages of a tournament or cash game. If you were in the pot heads-up against the player with Tens you’d be an 80% favourite. With those other hands in as well you’re no better than 50/50.

2. Is there any value in calling with small suited connectors in multiway pots?

If you call with hands like 4d-5d in a raised multiway pot you know exactly where you stand. If the flop comes down 9d-Jh-6c you know that if you play on it’s as a stone-cold bluff. If, on the other hand, you have A-A or K-K, you’re hoping to still be ahead but you could easily be crushed by a set, two-pair or be up against a big draw. With small hands it’s low-risk speculation – you either hit big or get out.

3. If you raise pre-flop with Ah-Qh and the flop comes Nine-high with two hearts, how fast should you play your draw?

You shouldn’t have too much trouble putting all your chips in the middle in this spot. You could have up to 15 outs if your overcards are live and you’ve still got nine with your flush draw if not. If you bet the flop you give yourself two ways to win – by getting your opponents to fold or by hitting one of your outs.

4. How fast or slow should you play a non-nut flush?

It’s very hard to get away from any kind of flush on an unpaired board. The only way you can find out if your hand is good is by betting and using the information you get back. If you check your flush on the turn and an opponent bets, you have to raise to find out where you are. There’s no point just calling, because if the guy moves all-in on the river what are you going to do? You’re almost certainly going to call and could be crushed by a larger flush.

5. How should you play a set in a multiway pot? What are the dangers of slow-playing?

You have to play sets strongly on the flop to isolate the action. If no one has got much you’re not going to get many chips out of it anyway, but giving away a free card to multiple opponents is a bad idea.

6. If you have top pair, top kicker with a hand like A-10 in a four-handed pot, would you come out betting from the big blind?

When you hit top-top you need to make a bet, but more often than not you’re just hoping to take it down right there and then. If anyone smooth-calls it puts you in a tricky position. You should probably bet around half pot as it’s a way to minimise your losses and maximise your profits. A half-pot bet will get the same reaction as a whole pot bet, so why waste the extra chips if someone comes over the top?

7. As players are less likely to slow-play does it make positional betting more effective?

You should always look to have position in a multiway pot, because if you think someone is making a move on the flop you can often raise them off their hand with a steal. They’ll think, ‘I thought my hand was good but he thinks his hand is better.’ So position opens a wider window of opportunity for bluffing. It’s better to pick on the aggressive players though, as they’re more likely to be making a move without the goods. But ultimately it’s down to the situation.