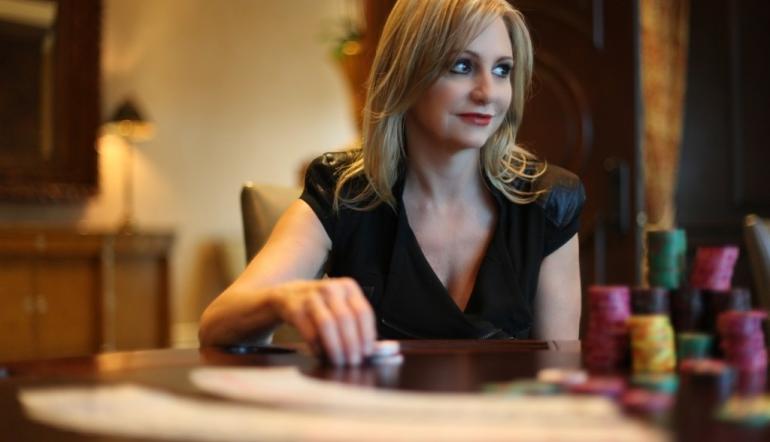 Jennifer Harman is an American professional poker player with two World Series of Poker bracelets to her name. Many know her from her appearances on the TV series High Stakes Poker and Poker After Dark.

Jennifer has played much higher stakes poker games than many professionals. She was the only woman to be a regular player in the ‘Big Game’ at Bobby’s room. This game was a high-stakes cash game played at the Bellagio.

Jennifer was born on November 19, 1964, in Reno, Nevada. She first started playing poker in 1972 at the age of 8-years-old. Her father played weekly poker games, and Jennifer would rail the action.

After begging her father for weeks, he eventually taught her how to play. And it soon became evident that she had a natural talent for the game.

At 17, Harman lost her mother, a terrible blow since the two had been very close. Poker became a big distraction for Harman. She would use a fake ID to play at her local casinos.

After school, Jennifer graduated from the University of Nevada with a degree in biology. Despite her excellent education, she decided to pursue a career as a professional poker player.

Ironically, despite her success, Jennifer now says she wouldn’t want her children to become professional players.

Harman’s career began to skyrocket at the 2000 WSOP, where she took down her first bracelet.

It came in the No-Limit Deuce-to-Seven event (a type of lowball draw game). The great irony here is that Harman had never played the variant before. Instead, she received five minutes of tuition from Howard Lederer on how to play before the event started.

At the time, this title made her the first woman ever to hold two bracelets.

Harman had to take time off from poker in 2004 due to health issues. Problems with her kidney meant that she would need to receive a transplant. (The procedure would be her second kidney transplant.)

She decided it would be best to take the entire year off from gambling to expedite her recovery.
But she wasn’t inactive during this time or even estranged from poker. She wrote the Limit Hold’em chapter for Doyle Brunson’s iconic book Super System 2.

As a result of her health difficulties (and those of her mother), Jennifer found a passion for helping others suffering from similar health challenges.

In April 2006, she hosted the first annual Jennifer Harman Charity Poker Tournament at the Venetian in Las Vegas. The tournament helped to raise over half a million dollars for people suffering from kidney failure.

Back on the Grind

Since her return to the felt, Harman has bagged several big scores.

Despite her great success in the live tournament scene, it’s clear that most of her profits and prestige have come from high-stakes cash games.

She is also a member of ‘The Corporation’. This group of poker players accepted a fascinating challenge from real estate mogul and billionaire Andy Beal.

Some details of this match are in the 2005 book The Professor, the Banker and the Suicide King: Inside the Richest Poker Game of All Time by Michael Craig.

It’s clear that Jennifer ticks the boxes and thoroughly deserves her place in poker’s hall of fame.

Aside from her poker life, Jennifer is a mother of two. She manages successfully to balance raising her family and playing high-stakes poker. Jen freely admits to not being much of a morning person when it comes to the kid’s school run. But she has learned to relax with her schedule.

In terms of future aspirations, Jennifer has revealed that she would be interested in the following subjects –

She feels that she has a lot to share regarding being a mother while playing poker and finding the time to raise kids. She believes that nobody is a perfect mother and that such material could be helpful to others.

We are looking forward to hearing from Jennifer, seeing if some of her aspirations are realised. And,  of course, hearing about any of her future big scores in poker.