What is Bankroll in Poker?

The term bankroll in poker refers to the amount of money a player has that he has available for playing poker with. Many professionals prefer to keep their bankroll separate from the funds that they need for day to day living. Their decisions regarding which games to play will be based (in part) on the size of their bankroll. The skill of making good use of funds set aside for poker is called bankroll management. 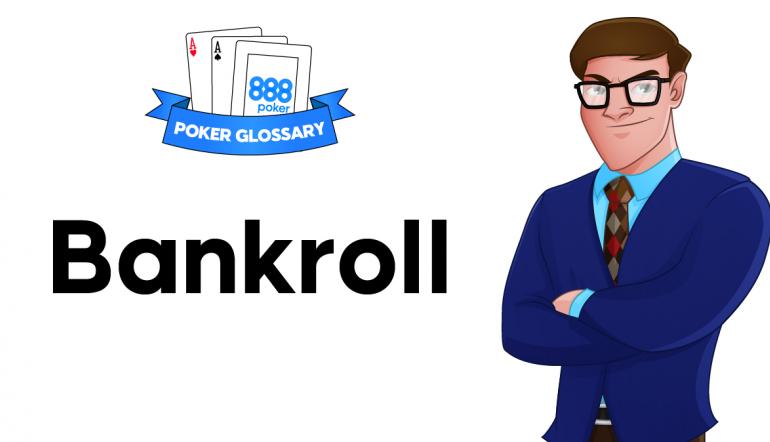 The discipline of managing a poker bankroll effectively is referred to as bankroll management or “BRM” for short. BRM is a crucial concept that can make or break a player’s poker career.

There is a fine line between “investing” and “gambling” in poker. Improper BRM is one factor that can cause our poker activities to be more accurately be defined as “gambling” rather than “investing”.

The word “bankroll” is often abbreviated and referred to simply as “roll”.

Example of Bankroll used in a sentence -> The games looked really soft and juicy, but we just didn’t have the bankroll for it.

How to Use Bankroll as Part of Your Poker Strategy

Correct bankroll management revolves around having enough buy-ins in our bankroll to help us absorb any likely downswings caused by variance (or occasional bad play). Seeing as the variance we encounter in cash-games, MTTs, and sit-n-goes is different, our approach to bankroll management in these variants should also be different.

Even within the same type of game, different players employ differing bankroll management strategies, some more aggressive than others. There is hence not a one-size-fits-all approach to bankroll management. The key concept revolves around managing our ROR (“risk of ruin”) where the ROR value is a percentage chance of going broke given a certain bankroll management strategy. Due to the insane nature of variance, all strategies have a non-zero percent chance of going broke, but it’s possible to keep this ROR valuable down low enough where it is either negligible, or at the very least tolerable.

There are ROR poker calculators online that allow the user to input a few variables (such as winrate, standard-deviation, number of buy-ins) and receive their ROR value expressed as a percentage. Note that certain variables such as “standard deviation” will usually need to be taken from tracking software. As a rough guide, risk-of-ruin values below 5% are usually considered acceptable, but it often depends on the player. For example, if we have the opportunity to replenish our bankroll after going broke, high ROR values might be tolerable. If losing our poker bankroll were to end our poker career however, we should strive for negligible ROR values wherever possible.

Having said that, BRM strategy is a trade-off. It’s common for players to assume that the lower the ROR value, the better the BRM strategy. This is not necessarily the case at all. Imagine the world’s best poker player, $1M USD in his bankroll, playing the lowest limits of online poker. He is certainly minimizing his ROR this way, but it should be clear that he is not maximising his potential long-term profits. He has the skill and the bankroll to play higher, so it’s clearly profitable for him to accept the slightly increased ROR and allow himself to move up stakes as quickly as possible. Of course, most of us don’t have $1M in our bankroll, but there are some cash game players out there who are perhaps playing $0.01/$0.02 NLHE despite having several hundred dollars in their bankroll.  The goal of a good BRM strategy is hence to move up limits as aggressively as possible while still retaining a tolerable (or negligible) risk of ruin.

The commonly cited value for cash games is to have 25 buyins in our bankroll for whichever limit we are playing. I.e, if we want to move up to $0.05/$0.10 we should have at least $250 in our roll. At this stage it might make sense to take a small shot at the next limit, perhaps moving down after dropping 5 stacks. This is just a rough guide however; the following principles need to be kept in mind.

- As we move up higher in stakes, tighter BRM strategies are recommended since our skill advantage will become smaller when facing tougher opponents.

Here is one possibility for cash game BRM loosely based on the cash-game offerings at 888poker.

Although tournaments are considered inherently more profitable than cash games (due to the softer competition), a bigger bankroll is required in order to survive the swings. Playing MTTs with only 25 buyins would involve an extremely high risk-or-ruin. It’s recommended to never invest more than 1% of our bankroll on a tournament buyin. I.e, if we have $100 in our tournament bankroll, we shouldn’t be investing more than $1 on a tournament buy-in.

SnGs are a little less tough on the variance front due to the smaller number of entries in each game (usually anywhere between 2 and 10, although larger field SnG’s are available on many sites). SnG BRM strategy might hence be more closely linked to cash game BRM (as seen above), but SnG’s still entail more variance than cash games and should be played with tighter bankroll requirements. It might be wise to avoid investing more than about 3% of our bankroll on a single SnG buyin, but it does of course depend on a number of variables such as the exact format of the SnG. Keep in mind the following.

- The larger the field of players, the higher the variance, the steeper the required bankroll.

- The larger our skill edge, the smaller the required bankroll.

- Whether or not we have the ability to move down limits or replenish our bankroll should have an impact on the BRM strategy we choose.

Once a BRM strategy has been decided upon, it is important not to change our strategy based on whether we run well or poorly on any given day. In the majority of cases where players blow their entire bankroll, it’s because they stopped following their BRM strategy at some point, perhaps due to chasing their losses. Disciplined players rarely go broke however, because they stick rigidly to their pre-determined bankroll management strategy.