What is Sit and Go in Poker?

A sit and go is a type of poker tournament that begins as soon as all players are registered. It differs from regular poker tournaments that start at specified time regardless of how many players are registered. Required number of entrants for a sit and go range from 2 to hundreds. Sit and gopayout structures may vary, for example, double or nothing sit and go’s reward exactly half of the entrants with double their buyin amount. 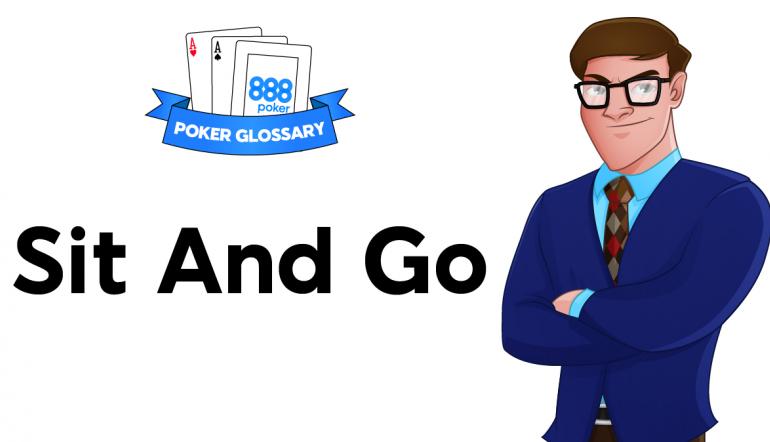 Explanation of Sit and Go

Unlike in cash games, players are not free to cash out or rebuy at any time. Sit and go entrants continue playing until they run out of chips. Prizes are awarded based on the position a player finishes the event. While the last man standing wins the entire sit and go, prizes are often awarded to players who outlast the rest of field: 1st place, 2nd place, 3rd place etc.

Sit and goes come in a variety of different styles with different rules and structures. Here is a short list of common structures -

Heads Up, 9-man, 180-man etc etc – Describes the number of entrants required before the sit and go begins.

Double or Nothing – Half of the registrants double their buy-in amount while the other half walk away with nothing.

Satellite – A tournament where winners compete for entries into a bigger tournament. In events where more than one ticket is up for grabs, most (if not all) of the winners receive the same prize (i.e. a ticket).

Winner Takes All – The first place finisher takes down the entire prize pool. Second place gets nothing.

Like cash games, sit and goes can be 9-handed, 6-handed or heads-up (and any other amount of players per table).

Example of Sit and Go used in a sentence -> The classic sit and go format runs with 10 players and awards prizes to the top 3 finishers.

For a start, not all chips are equal in sit and goes. A technique known as ICM (independent chip model) needs to be employed in order to correctly assign chips a monetary value. Depending on the exact sit and go situation it may even be correct to fold pocket Aces (in Hold’em) preflop as a result of ICM considerations. See the glossary entry under ICM and Bubble for more information on this topic.