What is Omaha in Poker?

Omaha is a poker variant similar to Hold’em. The key difference is that we get dealt 4 cards on the first betting round (preflop) instead of 2. We must then use exactly 2 of our hole cards in conjunction with community cards to make the best 5 card hand. Similar to Hold’em, Omaha has 4 betting rounds (preflop, flop, turn and river) followed by showdown. Omaha is typically played with a pot limit betting structure. 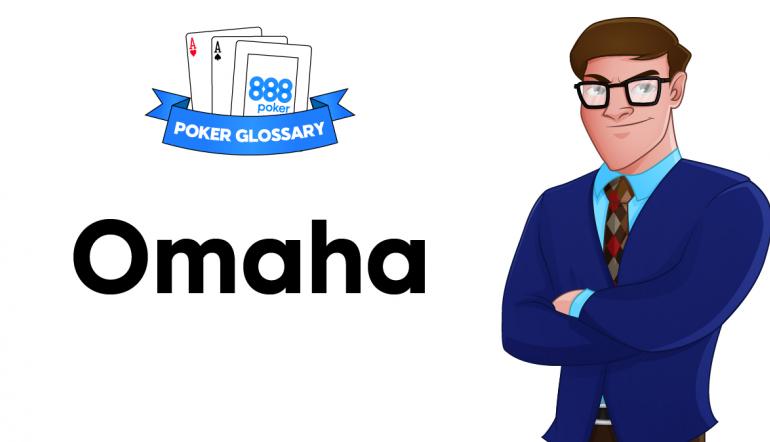 Example usage → “This particular poker-network is infested with bots”

Before understanding the flow of action in the poker variant Omaha, it might be a good idea to learn about the different hand strengths by checking out the glossary entry under hand rankings.

Before the first betting round begins, each player is dealt 4 cards face down known as hole cards. These cards will be used in conjunction with community cards to make a 5-card hand. Omaha must use exactly two of their hole-cards when formulating a hand. This is different from Hold’em where players have the option to use both, one or none of their hole cards when constructing a hand.

Before any betting actions begin, forced payments referred to as the small-blind and big-blind are placed into the pot (along with any antes if this is an ante game). The first betting round proceeds in a clockwise direction in accordance with each player’s position at the table. Players make bets or raises in line with the legal options discussed in the glossary entry under action.

Players then reach showdown, the point in the game where players reveal the strength of their hole cards. The strongest hand wins the pot i.e. all of the chips wagered in that one hand.

Exactly two hole cards must be used when creating a hand
Players are dealt four cards preflop instead of two
Omaha is typically played with a pot limit structure as opposed to no limit.

Example of Omaha being used in a sentence -> Hold’em remains the most popular poker game, but Omaha has been increasing in popularity lately.

How to Use Omaha as Part of Your Poker Strategy

It is significantly easier to make a strong made hand in Omaha than in Hold’em. Since many Omaha players migrate from a Hold’em background, it’s common for them to have a tendency to overplay made hands in Omaha.

As an example, one of the most commonly overplayed hands in Omaha is the AAxx. Not all AAxx are equal, since many of the AAxx have ragged side cards – AA72 rainbow for example. A Hold’em player might be used to treating AA as the immortal nuts and not realise that adjustments need to be made when looking down at a ragged AAxx in Omaha.

Non-nut 5-card hands are also a big problem for Omaha players. Non-nut straights, flushes, and full-houses can be extremely dangerous if overplayed. Since these premium hands are easier to come by in Omaha, the potential for domination is always higher. In many cases, a weak flush might be little more than garbage if our opponent wants to play for stacks.

Likely the most common mistake for new Omaha players however, is simply misreading their holding. They may not immediately be aware of the ruling that says they have to use exactly two of our hole cards. If there are four hearts on the board and we have the Ace of hearts in our hand, it’s easy for a novice player to assume that he has the flush when he in fact doesn’t.

- Although garbage hands can improve to strong holdings, it still makes sense to start out with a tight range of hands preflop.

- Being “in position” (acting last on every street) is a valuable advantage. We should be careful not to overplay hands while out of position.

- We should familiarize ourselves with some of the basic maths that surrounds poker. See glossary entries under pot odds, implied odds, equity, EV calculations, outs, expectation.

- The importance of a patient attitude and a strong mental disposition cannot be over-emphasized. See the glossary entry under mindset.