What is Stud in Poker?

Stud refers to collection of poker variants that have similar characteristics. Stud games don’t use hole cards but rather a selection of upcards and downcards dealt to each player. Upcards are visible to the entire table while downcards are secret (like hole cards in Hold’em). The most popular Stud variant is Seven Card Stud which involves 5-betting rounds. Stud games are typically played in fixed limit format and don’t make use of a dealer button. The action order is instead determined by the strength of players’ upcards. 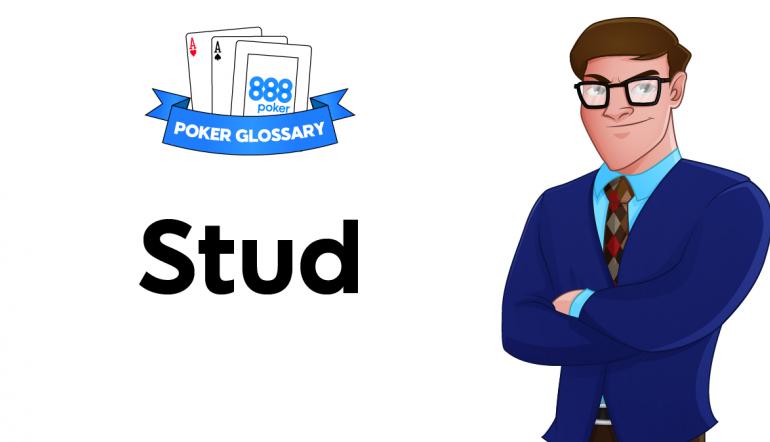 Stud games predate community card variants such as Hold’em and Omaha by a considerable number of years. Before Hold’em was even on the scene, limit Stud was the average poker player’s game of choice. Here are some key differences between Stud and Hold’em -

- Players are dealt a personal hand consisting of up-cards and down-cards.
- There is no dealer button in Stud. The flow of action is determined by the strength of the up-cards.
- Stud is nearly always played in fixed limit format unlike Hold’em.
- There are no blinds in Stud. Instead each player pays an ante, and the first player to act pays a “bring in” fee.
- The rounds are simply called “streets” i.e. “third street”, “fourth street”, “fifth street” instead of “flop”, “turn”, “river” etc, although sometimes seventh street is referred to as the “river”.

Let’s follow a hand of Stud through from the beginning and get a feel for the flow of action.

1. Antes are paid and each player is dealt three cards, two down-cards and one up-card. An “up-card” is visible to the rest of the table while down-cards are only visible to the player who holds them (similar to hole-cards in Hold’em or Omaha). By this stage all players will have invested an ante payment to begin building the pot.

2. The player with the weakest up-card has to “bring-in” the action. A player with a Deuce would hence have to act first on the first betting round (known as third street). In the scenario where two players share the same lowest up-card, the ranks are broken down further by suit. The suits are ranked in alphabetical order i.e. clubs, diamonds, hearts and spades, with clubs being the lowest. Hence if player 1 has the Deuce of hearts while player 2 has the Deuce of diamonds, then player 2 has the bring in the action since his Deuce is of a weaker suit.

The betting action proceeds based on the standard legal options outlined in the glossary entry under action and proceeds in a clockwise direction. Since Stud is typically played with a fixed limit betting structure it means there is a cap on how many raises can occur on each street. See the glossary entry under structure for more information on this.

3. A second up-card is dealt to every player at the table and the fourth street betting round commences.

The flow of action now begins from the player with the strongest up-cards and will continue to do so on every subsequent street. On fourth street players are forced to use the small-bet sizing. The only exception is when a player has an exposed pair as his two up-cards. In such cases he has the option of utilizing either the small-bet or the big-bet sizing. Whichever sizing he selects, the action continues in increments of this sizing on fourth street.

4. A third up-card is dealt to every player at the table and the fifth street betting round commences.

On fifth street, action occurs in increments of the big-bet regardless of the strength of any player’s up-cards. Using the small-bet sizing is no longer an option.

5. A fourth up-card is dealt to every player at the table and the sixth street betting round commences.

Once again, players are forced to use the big-bet sizing on this street. At this stage, every remaining player has 2 down-cards and 4 up-cards.

6. A final down-card is dealt to every player at the table and the seventh street betting round commences.

The final betting round occurs in increments of the big-bet sizing. After the betting action on seventh street (sometimes referred to as the “river”) showdown is reached and all players remaining in the hand must reveal the strength of their holding. The best hand wins the pot; the rules for hand rankings are the same as in Hold’em and Omaha.

Stud can be played with up to 8 players at the table, and simple maths reveals that there might not be enough cards in the deck for everyone. If 8 players all have 7 cards then 56 cards are required, with a standard deck only containing 52 cards. This scenario almost never happens however since at least one (but usually most) of the players will have folded on an earlier street. In the unlikely event that all 8 players are still involved in the hand by the river, the final card is instead dealt as a lone community card which all players can use to construct a 5-card hand.

Note that Stud can also be played in a hi/lo split pot format and also a lowball format known as Razz.

Example of Stud used in a sentence -> There are a huge number of different Stud games, all with similar characteristics, but different exact rules.

How to Use Stud as Part of Your Poker Strategy

One factor that separates Stud from community card variants is the sheer amount of information displayed on the table in any one moment. A good player looks at all of his opponents’ up-cards and weighs up relevant card removal effects.

As a quick example imagine we are dealt (A♣8♠)9♣ on third street. Much of the value of this hand will depend on its likelihood of making a flush by the river. If a large number of our opponents are dealt clubs on third street, then this hand goes down in value. If none of our opponents have clubs, it must mean that a larger number of clubs are remaining in the deck (on average). Any time we are drawing to a made hand, we hence want to consider which of our outs are still live.

Our opponent’s board can give a lot of information about the strength of his holding. For example, if our opponent holds the following board (xx)5♣6♣7♣8♣(x) it should be pretty obvious that he might easily have a straight or a flush. Perhaps we hold three-of-a-kind which ordinarily might be relatively strong, but in the face of our opponent’s board may need to be discarded.

Even our own board may give us clues regarding the strength of our opponent’s holdings. If our own board indicates that we might have made a strong made hand, aggression from our opponent should be treated with more respect. If he is still content to play aggressively despite the realisation that we could be very strong, the likelihood is that he has an even stronger hand himself.