What is Bring-in in Poker? 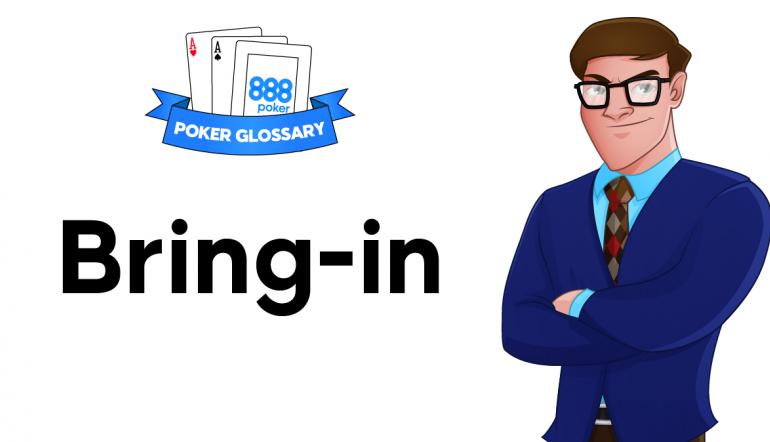 The bring-in is usually an amount smaller than both the small-bet and the large-bet in stud. (Note that Stud is nearly always played in fixed-limit format, even in the modern era).

In a Stud game with stakes $5/10 (small-bet/big-bet) a logical bring-in size might be $2. Either way, the size is fixed by the casino. The first player to act on third-street (the first betting round in Stud) must either pay the bring-in ($2 in this case) or “complete” to the full amount of the small-bet ($5 in this case).

Unlike in other variants, there is no dealer button in Stud. The bring-in is always the player who is dealt the lowest possible up-card on third-street. It’s hence possible to be the bring-in several times in a row. (It should even out in the long-run of course).

Example of Bring-in used in a sentence -> In Stud, bring-in can refer to both a position and an amount of chips that the player occupying that position must place into the pot on third street.

How to Use Bring-in as Part of Your Poker Strategy

There is nothing wrong with paying the bring-in as opposed to completing in Stud. In fact, it’s often the smart thing to do, depending on the type of starting hand we have. Naturally, if we are dealt trash, there is no real reason for us invest more than the bring-in, since we don’t want to make the situation less profitable than it already is.

Some types of starting hands in Stud actually have better playability multi-way. Paying just the bring-in encourages more opponents to enter into the pot.

Where possible we want to narrow down the field with premium holdings, and completing may accomplish this, but it’s also necessary to take into account the tendencies of the opponents we are facing. Due to Stud being played in fixed limit format, many opponents are completely reluctant to fold on third-street, especially at lower limits. Sometimes our decision to pay the bring-in rather than complete is more a reflection of our opponents than a reflection of our starting hand.