What is Coinflip in Poker?

A coinflip is any situation where the outcome is relatively close to 50/50. For example, in Hold’em, we stack off preflop with our TT vs our opponent’s AKs. He will have around 46% chance to win while we will have around 54% chance to win. Seeing as this situation is very close to even, it’s common to refer to it as a coinflip. Often the word coinflip is shortened even further to flip. 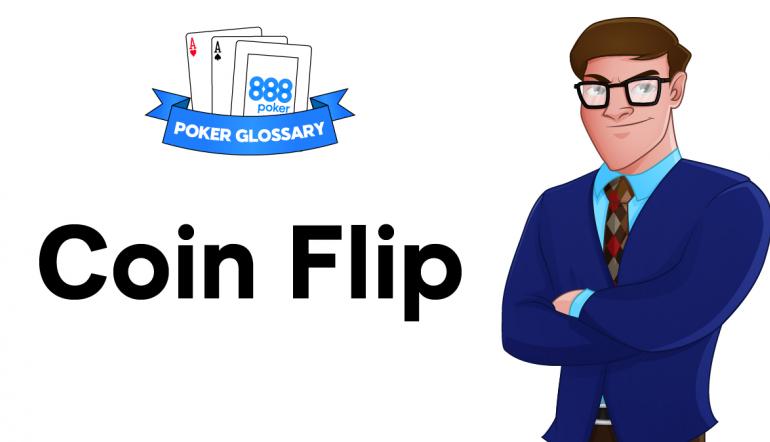 A “coinflip” is a somewhat loose term used to describe a wagering decision (typically all-in) where no player has a clear advantage.

The term is loose because even a 60/40 all-in (or perhaps even further weighted to the advantage of one player) may sometimes be referred to as a coinflip.

The term comes from the idea that a fair coin has an equivalent chance of landing on either heads or tails.

Example of Coinflip used in a sentence -> We should try and avoid unnecessary coinflips if we want to reduce our variance.

How to Use Coinflip as Part of Your Poker Strategy

Pure coinflips carry little advantage (we may as well be playing roulette). However, due to the nature of poker, players become priced in to coinflip scenarios. Consider the following -

If we imagine that both players have roughly 50% equity, player A must call against 5bet (at least, in a cash game). This is because he has already invested 25bb into the pot and hence only needs 37.5% equity in order to break even on a call. Folding would be a mistake since calling carries a higher expectation than folding even though hero won’t be a clear favourite to win the pot after all the chips go in.

If player A instead was offered exactly 37.5% pot odds, he could technically decide whether to call or fold (it wouldn’t change his expectation assuming zero rake). Despite him being an underdog, calling might still be referred to as a “coinflip” given that he is expecting to break even on a call. We hence see that the term coinflip may sometimes be used even when one player has a significant equity advantage.

There is usually a limit on this last point however. An 80/20 lineup would not often be referred to as a “coinflip” due to the decisive advantage that the 80% equity player has.