What is Downswing in Poker?

Find the meaning of the term "Downswing" in poker. Find out what we should expect, and how to deal with downswings. 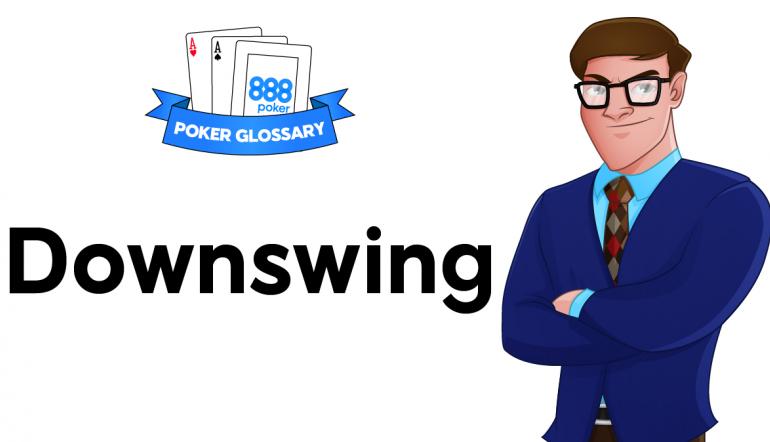 Due to the exceptionally large nature of variance, downswings in poker (even amongst winning players) are relatively common.

The size of likely downswings is usually a function of winrate and playing style. The lower a player’s wirnate, the more likely it is that he experiences downswings on a regular basis. Higher variance styles also make big downswings (and big upswings) more common.

As a rough guide,  even strong winning cash-game players should expect to drop 20 buyins from time to time (perhaps 2-3 occurrences every million hands). Smaller 5-buyin downswings will happen consistently and should be considered a standard part of the game.

If the above rough guide applies to strong winning players, then the majority of poker players are in line for even more turbulence. This is especially true for those having winrates close to the break-even mark (i.e perhaps 1bb/100 hands or so). Big downswings are almost guaranteed, it’s simply a matter of time.

In order to generate more specific numbers regarding the nature of possible downswings, we can make use of variance simulators. Variance simulators allow us to input a few variables (such as our winrate and standard-deviation) and see projections regarding best and worse case scenarios for our results.

Some of the worst case scenarios are quite surprising; for example, it’s entirely possible for a 6bb/100 winner to end up losing over 100k hands of cash game play. Of course, this is not especially likely, but the more volume we put in, the more likely it is that we experience an exceptionally bad run at some point in our career.

How to Use Downswing as Part of Your Poker Strategy

The enemy for most poker players is not the downswing itself, but rather their psychological reaction to losing chips over a prolonged period of time.

In many instances of big downswings, only a certain percentage of the swing can legitimately be attributed to variance. After dropping the first 5-10 stacks, players’ games become increasingly affected by tilt, causing them to make questionable strategic decisions at the table.

It’s hence possible that after dropping 20 stacks, only 10 aretruly caused by variance, while the other 10 are a product of mental game issues. Many downswings hence become prolonged as a result of mental game problems.

It’s important not to use the concept of the “downswing” as an excuse for avoiding taking responsibility for losses. If unsure, it’s usually safer to assume that losses are a product of bad play rather than variance. Some players are consistently losing money at the tables but refuse to re-evaluate their strategy because they convince themselves that they are “simply running bad” and that “it’s just a matter of time before things turn around”.

While it’s not impossible to lose more than 20 buyins in a cash game as a product of variance, it becomes probabilistically more likely at this stage that a player is legitimately not a winner in those specific games (unless they already have a decent history of winning in that environment).