What is Flush in Poker?

A flush is a five-card hand where all cards are all of the same suit. The strength of a flush is determined by its highest card. If two players both have a flush with the same high card, the second highest card is checked (and so on). In the majority of poker formats, a flush beats a straight, but loses to a full house. 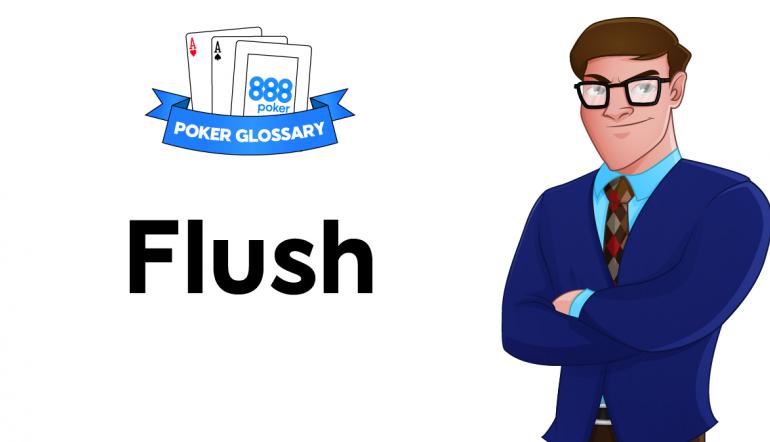 We make a flush when we hold five cards all of the same suit.

For example, in Hold’em:

In this example both hand 1 and hand 2 make a flush on the flop. In situations where more than one player makes a flush, the winner is determined by the highest ranked card which contributes to the flush.

Hand 1 makes an Ace-high heart flush, while hand 2 makes a King-high heart flush. Hand 1 hence wins in this matchup. Note that although hand 2’s flush is technically King-high, it is often colloquially referred to as a “Queen-high flush” since the King of hearts is already on the board.

In Hold’em it is also possible to make a flush using just one hole-card. Although both players make a King-high flush in this instance, hand 1 uses both of its hole-cards while hand 2 uses only one. Despite this, hand 2 is the winner since its second highest flush-card is the Queen. Hand 1 hence makes a King-Ten-high heart flush, while hand 2 makes a King-Queen-high heart flush. To make life easier, hand 1 is usually referred to as a “Ten-high flush” while hand 2 is usually referred to as a “Queen-high flush”.

Example of Flush used in a sentence -> We had the diamond flush draw on the flop and finally caught the made flush on the river when that last diamond hit.

How to Use Flush as Part of Your Poker Strategy

Two card flushes are nearly always good enough to play with for 100bb stacks unless the board is paired. In scenarios where our small flush runs into a higher flush on non-paired boards for 100bb stacks we can generally think of these situations as “coolers”. (Just bad luck, we were not supposed to fold our hand).

One card flushes in Hold’em are significantly weaker and we should usually only be comfortable getting the stacks in when we have the nut-flush on a non-paired board. One-card small-flushes are little more than bluffcatchers in Hold’em. This should help to underscore the importance of relative hand strength over absolute hand strength. Although a made flush is a very strong hand in the absolute sense, it’s our relative hand strength that determines how many chips we should invest with our holding.

One card flushes are impossible in Pot Limit Omaha since players must always use exactly two of their four hole-cards when formulating a hand. Any small made flush should be treated with a great degree of caution in Omaha even if there is no pair on the board. Since flushes are a lot more common in Omaha than Hold’em, the chance of non-nut flush being dominated is significantly higher.