What is Heads up in Poker? 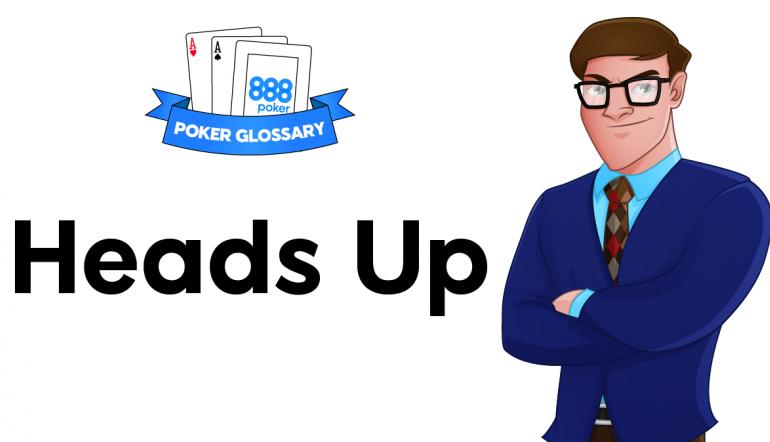 Explanation of Heads up

There are two different scenarios where we will find ourselves playing heads up poker.

1. We are playing a heads up cash game. Either we are deliberately choosing to play 2-handed, or we are playing a ring-game where the other players have either left or haven’t joined yet.

2. We have reached the final table of a tournament and there are only two players left.

Note that a hand may often be described as “heads up” even if multiple players were dealt into the hand. This might occur when only 2 players see the flop after all other players fold preflop. “We saw a flop heads up after open-raising preflop and getting one cold-caller”.

How to Use Heads up as Part of Your Poker Strategy

While many professional cash game players choose to play six-max or full-ring variants, a subset of professional cash players make most of their money playing heads up games. It’s generally believed that expert heads up cash game players have the potential to make more money than six-max and full-ring players. This is due to the ability to direct all of one’s volume specifically towards playing weaker opposition. Ring-game players will often be dealing with a mixture of skilled and non-skilled opponents whereas if a heads-up player decides his opponent is overly skilled he has the ability to walk away from the game and select new opposition.

Exact strategy adjustments for playing heads up will depend on the poker variant, but here are some general guidelines.

1. Preflop ranges will typically be looser when playing heads up. While a ring game player might often elect to play 20-25% of his holdings, a heads up player will usually enter the pot with closer to 60-70% of starting hands.

2. Made hands on the later streets are typically worth more in heads up games. For example in Hold’em, holdings such as Ace-high may be strong enough to win a fair share of pots postflop. The same hand in a tight full-ring game is barely worth anything.

Deliberately only targeting weak opposition when playing heads up is colloquially referred to as “bumhunting” and carries a negative connotation. Exclusively targeting recreational players is considered bad for the poker ecology, but it’s also hard to argue with the business sense of refusing to play strong opposition. So, while playing only weak opponents is excellent for making money, it is looked down upon by some portion of the poker community.