What is Nut Flush in Poker?

Nut flush in poker is a flush that also happens to be the best possible hand in a given situation. However, the term nut flush is commonly used to describe any Ace high flush, even if that Ace high flush is not technically the nuts. The board might be paired (allowing for full houses) or there might be a straight flush possible. Ideally we’d only use the term nut flush if our flush really is the nuts – but this is not the case in day to day usage. 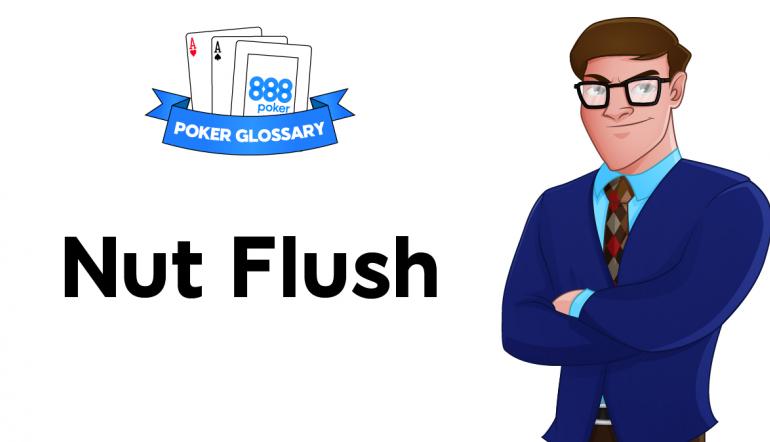 Flushes are ranked according to their highest card, then their second highest card and so on. The term nut flush implies we have made the best possible flush.

Although this will be the Ace-high flush it’s useful to remember that the Ace-high flush is not always the absolute nuts in community card games such as Hold’em and Omaha. If the board is paired it means that stronger hands are possible such as full houses. Even in such circumstances, players may continue to refer to the Ace-high flush as the nut flush despite the fact that it is not technically the stone cold nuts.

In games without community cards such as Stud and Five Card Draw, the term “nut flush” loses some of its meaning. This is because no flush can ever be the nuts; it’s always possible that one of our opponents has made an even stronger hand. Even still, players again may continue to refer to the Ace-high flush as the nut flush. The term should be taken to mean, the strongest possible flush, rather than “the stone cold nuts”.

Example of Nut Flush used in a sentence -> We called villain’s turn raise and made the nut flush on the river.

How to Use Nut Flush as Part of Your Poker Strategy

- Ace-high flushes are the best when they are also the stone cold nuts.

- Ace-high flushes are weaker in community card games if the board is paired.

- Ace-high flushes are weaker in variants were flushes are more commonplace (such as Omaha).

- Ace-high flushes are weaker in stud games when our opponents’ boards are highly co-ordinated.

- They are more likely to get paid off in Hold’em when they are formulated using two of our hole-cards rather than just one (better implied odds).

Of course, in situations where our nut flush really is the stone cold nuts (such as in a community card game), we should do everything in our power to get all the stacks in postflop.

Is the ‘Nut’ Flush Always the Nuts in Poker?

How Often Does the Nut Flush Draw Hit in Poker?

How Often Do We Flop the Nut Flush in Hold’em?

Assuming we hold a suited Ax preflop we can expect tp flop the nut flush around 0.84% or one in 119. Assuming any suited starting hand our odds of flopping the nut flush decrease to 0.17% or one in 588.

How Often Does the Nut Flush Hold up in Hold’em?