Post means to make a mandatory payment into the pot during a hand of poker. There are two types of mandatory payments that a player may be asked to make; blinds and antes. The antes are posted by every player at the table while the blinds are posted only by specific seats (small blind and big blind). If a player wishes to join a game of poker mid orbit, it’s necessary that he pay some extra blinds before being dealt cards – this is referred to as posting. 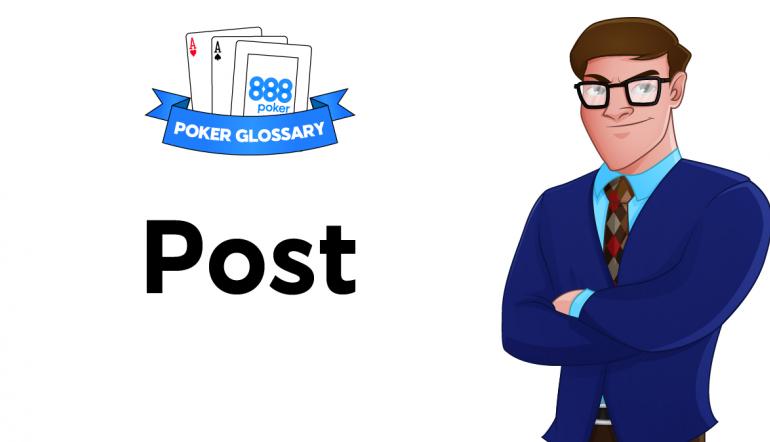 “Post” can be used to describe any situation where a player makes a forced bet. When placing the mandatory small blind or big blind payment into the pot the action is frequently referred to as “posting the blinds”. In ante games, every player at the table must “post” an ante before the preflop cards are dealt.

However, “post” can also be used to describe a more specific scenario where a player makes an out-of-turn mandatory blinds payment. This would occur if a player decided to join a poker cash game mid orbit. Since being forced to pay the blinds is a huge disadvantage in poker, it would be unfair if a player could sit down mid-orbit without the need to make some type of mandatory payment. This would allow for angle-shooting, since a player could join the game on the button and leave the table before needing to make the mandatory small-blind payment. While it might not sound like a big deal, even a relatively mediocre player could end up being a huge winner if he never had to make blind payments.

Missed blind payments are referred to as “dead blinds”. Some casinos will give the missing player a circular disc (similar to the Button) to indicate whether that player missed the small-blind payment, big-blind payment, or both, on the current orbit.

Example of Post used in a sentence -> You can keep the other players at the table happy by remembering to post the blinds when it is your turn to do so.

How to Use Post as Part of Your Poker Strategy

In most cases, posting missed blinds does not make strategic sense. It is mathematically better to wait until we are in the big-blind until we post. (Of course, we won’t then be dealt any hands during this time). When we make our blinds payments, we are essentially paying to see one orbit of poker. Joining mid-orbit means that we make the same payments to see less than a full orbit of poker. It’s recommended therefore that players who are in no rush simply wait to be dealt into the big-blind organically.

Of course, many players are impatient and prefer to be dealt into the hand immediately even if the strategy is not mathematically sound. It might depend to an extent on whether we are playing the game professionally or recreationally.