What is Short handed in Poker?

Short Handed in poker refers to a poker game with 6 or less players. Games with more than 6 players are generally referred to as “full ring” tables. Short handed also applies to 2 player tables, although the term ‘heads up’ is more commonly used to describe 2-way action. 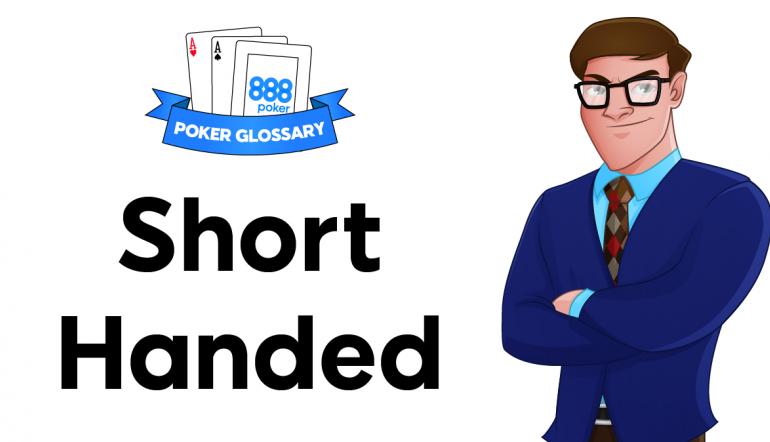 The term “short handed” describes any poker table with 6 players or less. This helps to differentiate from tables with 7-10 players which are instead described as “full ring” tables.

Full ring tables are perhaps the most traditional format in pokker. For example, most serious poker tournaments involve 9 or 10 handed tables. Stud games typically involve 8 players at the table.

The term “short handed” may also be used to describe any table that is not at full capacity. For example, a table with seven players might still be described as “short handed” assuming its maximum capacity is 10, but three players left the table.

Example of Short Handed used in a sentence -> The general consensus is that short handed action requires more skill than full ring action.

How to Use Short handed as Part of Your Poker Strategy

The number of players at the table has a big impact on correct strategy. Without tying our strategy advice to a specific variant, we should keep the following in mind.

Short handed games are hence especially good for players who like to play a loose game with wide ranges. For those who like to play on the tighter side and wait for premiums, full-ring games might be a better choice. 6-handed games are generally considered the toughest due to their popularity, so it’s worth keeping in mind that full-ring and heads-up games often provide a softer field of opponents, making bigger profits possible. Heads up poker is considered by many to be the most profitable format due to the possibility of targeting specific opponents but it’s worth remembering that heads up play requires more skill than full ring play due to the necessity for wider ranges.

The requirement for loosening up in short handed games also applies to the later streets. Full ring players have a tendency to stack off extremely tight ranges postflop, so it’s important to be careful we are not constantly paying off our opponents with worse.

6-handed games provide a nice middle ground. Plenty of action but not the requirement to play over half of our starting hands. This is no doubt one of the reasons that 6-handed games are currently the most popular online format.