What is Slowroll in Poker?

Slowroll refers to the act of taking a long time to make an easy call when closing the action on the river. The extra time taken to make the easy call serves no strategic purpose aside from trying to upset our opponent which is considered a mild form of cheating (i.e. angle shooting). Taking a long time to reveal the winning hand at showdown is also considered a form of slowrolling. Perhaps our opponent has even started to rake in the chips before we hit him with the news that we had him beat all along. Taking a long time to act with a big hand when not closing the action is a legal part of the game and is referred to as ‘holywooding’. 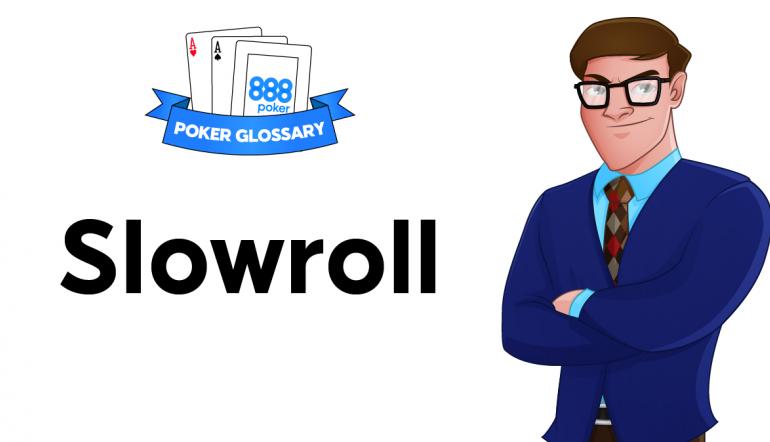 Although slowrolling confers no tangible advantages (aside from perhaps tilting our opponent), it is considered unethical behaviour. However, a clear distinction should be made between “holywooding” (ethical) and “slowrolling” (unethical). Holywooding refers to taking a long time to act with the intention of disguising a hand’s true strength. The key difference between Holywooding and slowrolling is that slowrolling only takes place when a call would close the action.

For example, imagine in a Hold’em cash game our opponent shoves all-in preflop and we hold pocket Aces. If we are the only other person left in the hand, there is no reason for us to take time over our decision. We clearly have a call and delaying confers no additional strategic advantage since our opponent has already taken his last action in the hand. Taking a long time to call in such a scenario is considered disrespectful.

If we instead imagine that there are several players to act behind us who also have the option to call the all-in, we can now take as long as we like to make the decision (within reason). While we still have an easy call, we want to sell the idea to the players behind us that our holding is not that strong (hoping to induce additional calls). We can hence delay for a while, trying to make it look like our decision is not as easy as it really is. This type of acting, known as “holywooding” may confer advantages due to deception, and is considered an ethical and legal part of the game.

Slowrolling may also refer to the act of not being forthcoming regarding the strength of ones holding at showdown. Our opponent may assume we are mucking our hand and be about to take down the pot when we table the best hand at the very last moment.

Another example would be to announce that “we have a pair of deuces” and then add rather belatedly “and a pair of Queens to go with it”. We were deliberately misleading about the strength of our holding since we should have announced immediately that we hold two-pair.

Example of Slowrolling used in a sentence -> Try and avoid slowplaying other players at the table, it will make you unpopular.

How to Use Slowroll as Part of Your Poker Strategy

Holywooding can be considered a type of “reverse-tell”. The idea is to deliberately make our decision look like it is much closer than it really is when we in fact have a strong made hand. If we were to always act quickly every time we were strong, it might give unnecessary information away to our opponents.

Discretion should be employed however. Holywooding for excessive amounts of time can be considered both unethical and in some cases an angle shoot.

Slowrolling itself is sometimes used as a strategy to try and tilt opponents but is generally avoided as a tactic by any self-respecting player. It also runs us the possibility of getting thrown out of a live casino if the dealer/floorman considered us as having crossed the line.