What is Tell in Poker?

A tell in poker is a piece of information that gives us additional clues about the type of hand our opponent is holding. For example, perhaps a player’s hands tremble when they pick up a big holding. Tells can cover a wide range of different areas including, timing, bet-sizing, verbalization, posture, eyes, hands, chip tricks and even use of a card protector. In the classic movie Rounders Teddy KGB has a (somewhat unbelievable) tell where he eats an Oreo every time he has a big hand. 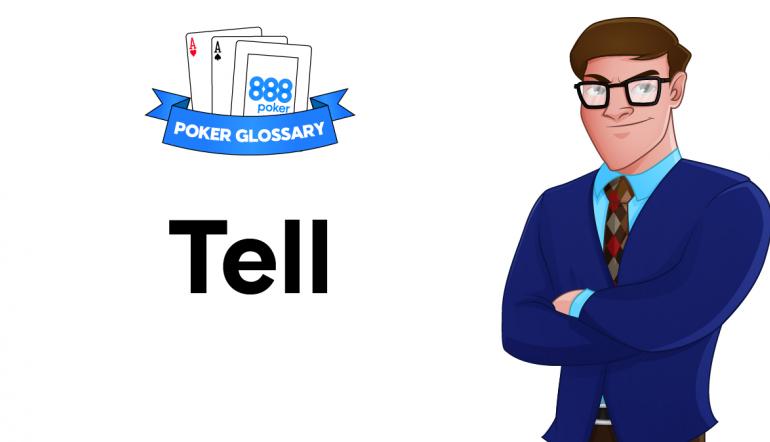 Before the modern era of poker where maths is applied liberally in an attempt to generate optimal solutions, poker was mostly a game about people. The players at the table would be watching each other, trying to establish through body-language and speech patterns whether another player at the table was bluffing. A certain action or style of behaviour which gives unintended information regarding the strength of one’s holding is referred to as a “tell”.

Although the importance of tells is diminished in an online environment, many live players still follow a heavily “tell-based” strategy, in some cases with relative success. Even if they have a weak understanding of the mathematics that governs poker, being a body-language expert can sometimes be enough to come out on top.

Example of Tell used in a sentence -> Experts at body language are usually very good at spotting their opponents’ tells in poker.

How to Use Tell as Part of Your Poker Strategy

There are a large number of areas players will consider when looking to pick up a “tell” or “read” on their opponent. Here is a non-exhaustive list. It’s useful to remember that each of these tells don’t necessarily mean the same thing for every opponent. While we’ll list the tells themselves, it’s up to the player to figure out what they mean for each opponent.

Visible Heartbeat – A heartbeat can often be detected through a player’s clothing. Pulsing veins may also give indication of a high heart-rate.

Dilated Pupils – Dilated pupils are a classic indicator of fear. Some players choose to wear sunglasses in order to hide any possible tells given away through the eyes.

Gaze Direction – Whether a player is looking at his opponent, his chip-stack, or off into empty space can often be revealing. A quick glance at villain’s stack before making a decision might indicate willingness to play for stacks.

Mouth – Some players claim they pick up the most tells through the lips. It’s possible for the lips to be tight and thin (usually not relaxed) vs thick and full (more relaxed). Many players use one hand to cover their mouth when making betting decisions.

Card Apex – “Card Apex” refers to how long a player spends looking at his cards after glancing at them for the first time.

Card Rechecks – The number of times a player rechecks his hole-cards and at which moments can be telling.

Card Protector – The decision to use a card protector might reveal information if not employed evenly. For example, if we subconsciously only employed the protector when our hand is strong, we’d be unintentionally giving away huge amounts of information.

Vocalizations – Anything vocalized by a player runs the risk of giving away information. “Tell-based” players often employ a technique known as “speech play” to try and illicit information from their opponent by questioning them verbally. Sometimes the decision to not verbalize can also reveal information. Perhaps a player usually vocalizes the word “check” but this time decides to tap the table twice when the action is on him (commonly accepted signal for checking).

Decision Timing – Not all decisions take the same amount of time. It’s often possible to make educated guesses regarding our opponent’s holding based on the amount of time he takes to make a decision. This tell also exists in the online world – they are referred to simply as ‘timing tells’.

Bet Sizing – Gaining information based on bet-sizing is where the psychological and mathematical aspects of poker meet. “Bet-sizing tells” can also be utilized in an online game. For example, if we were to always bet pot-size when we have the nuts, our opponent might stop paying us off.

Live players especially want to be alert, not just for detecting tells in their opponents, but to make sure they are not giving away tells themselves which could be costly for their winrate.