Street poker is essentially an unwritten agreement that two players are going to play loose aggressive poker with overly wide ranges. One player could easily counter the other by tightening up significantly, but so long as both players continue to play overly wide ranges, the game can be considered fair. 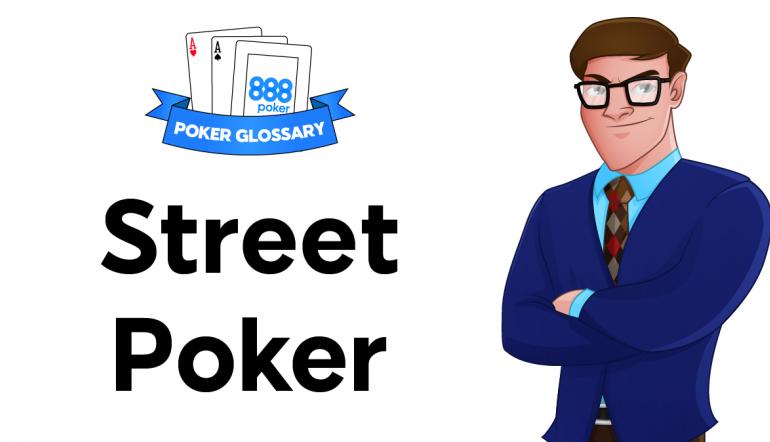 As a Round of Betting

Any of the betting rounds in any poker variant can be referred to as “streets”.

The names of the streets will depend on the variant.

Such strategies are often a part of televised cash games. Professional players are seen playing insupportably wide ranges because it is “good for TV”. After all, players are often contracted for such shows based on their entertainment value rather than their strategic prowess (even if they are otherwise very sound strategically).

Street (as a background)

While many successful poker players rely on a sound theoretical knowledge of poker, others still manage to get by relying purely on intuition and “street smarts”. Such players will often be uncomfortable with higher level disciplines such as database analysis, application of game theory and other mathematical concepts. When asked why they take certain actions at the table, they may not be able to provide satisfactory explanations (in terms of theory). Despite this, they may do well in terms of results and in some cases be able to pass along their skillset to make others winning players also.

Example of Street Poker used in a sentence -> The games are pretty wild, a lot of street poker going on there.

How to Use Street Poker as Part of Your Poker Strategy

Knowing the names of various streets is presumably not a pre-requisite to being a winning player. Having said that, it’s rare to find a winning player who is unaware of such basic information.

“Street poker” in general usually implies lack of sound strategy. While certain techniques might work, it’s generally preferable to be able to demonstrate mathematically that such techniques will be profitable in the long run. Connecting with higher level concepts such as application of game theory and practical database analysis is recommended for maximum success.