What is Flop in Poker?

The flop is the second betting round in community card poker variants such as Hold’em and Omaha. On the flop, three cards are dealt face up in the centre of the table which all players may use (along with their hole cards) to construct a 5 card hand. 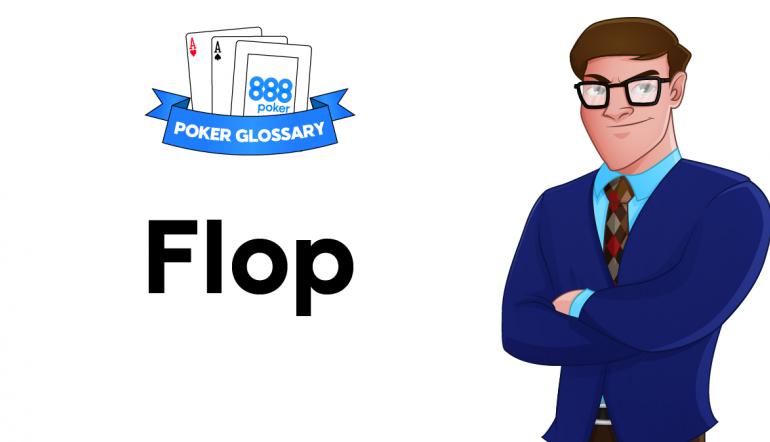 How does the Flop Work in Poker?

Three cards are dealt face up in the centre of the table. These are ‘community cards’ which can be used by all players to construct a 5 card hand. After the cards are dealt, a round of betting takes place before moving on to the next street (known as the ‘turn’ in community card games).

Why is it Called the Flop in Poker?

The popular consensus is that the flop gets its name from the sound of the three flop cards being placed on the poker table. Of course, it’s impossible to know this for certain and the origins of the name might be entirely different.

How do you Play the Flop in Poker?

One of the most important factors in flop play is looking at the flop ‘texture’. Depending on whether the cards are co-ordinated (drawy texture) or disconnected (dry texture) different strategies will make sense. Good players think about what types of hands their opponents may have entered the pot with preflop and how these hands ‘connect’ with the three cards on the flop.

Can you Raise Before the Flop in Poker?

Who Bets First After the Flop in Poker?

Whoever is in the earliest position at the table bets first after the flop in poker. This is the position to the direct left of the dealer button (i.e. small blind if he has not already folded preflop). Action then proceeds in a clockwise direction around the table ending with the button who acts last.

How do I Read my Hand on the Flop in Poker?

Is there a Flop in Other Poker Variants?

Only community card games such as Hold’em and Omaha have a flop. Different poker variants have different names for the streets. For example, the second betting round in stud games is known as ‘fourth street’.

Since the flop is the only street where three cards are dealt, it represents the biggest shift in available information relative to the previous street. It’s usually at this point that good players will make a rough plan for how they expect the rest of the hand to play out. Any time we continue past the flop, we should have at least a basic idea regarding how we will play on the variety of different turn cards that might fall. Check out this article for tips on playing postflop in poker.