What is Bubble in Poker?

The bubble is the situation in a poker tournament right before the prize pool is reached. Every player knows that if he busts out of the tournament right now, he’ll walk away with nothing. This creates a dynamic where a large number of the shorter stacks are simply trying to ‘hold on’ until that last player busts. Although the largest bubble is always right before reaching the prize pool, miniature bubbles can be created any time there is a considerable jump in payout. 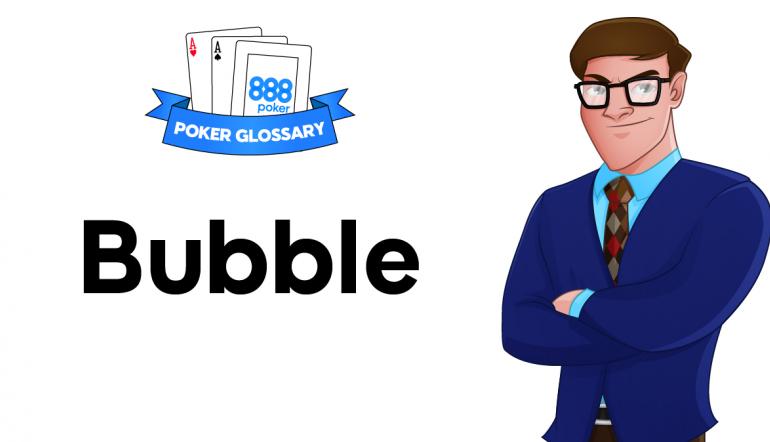 The bubble occurs when only a few players need to be eliminated before the prize-pool is reached. Players are especially reluctant to bust out of the tournament during this period since they will go home with nothing. Getting knocked out during this stage of the tournament is referred to as being “bubbled” or “bubbling”.

While “bubble” usually refers to tournaments directly before anyone has reached the prize pool, miniature bubbles can occur during big payout jumps in the prize structure. For example, if finishers between 61-80 receive $50 but finishers between 41 and 60 receive $100, players will be reluctant to bust out in 61st place. If they can outlast one more player there is a significant jump in the prize they will receive.

It’s common on the bubble and before prizepool pay jumps to enter into hand for hand play. (See glossary entry under hand for hand for more information on this topic.)

Example of Bubble used in a sentence -> The larger stacks can get away with stealing more aggressively on the bubble, because no-one wants to give them action until the bubble has passed.

How to Use Bubble as Part of Your Poker Strategy

Players with bigger stacks are often at an advantage during bubble play. The shorter stacks are often looking to play conservatively and avoid committing their stack where possible. It’s a natural reaction for players to try and “hang in there” until the next pay jump or reaching the money after the bubble breaks. It’s also actually correct for them to do this in many cases due to ICM (independent chip model) considerations. Being forced to play tight ranges as a result of specific stack depths is described as “being under ICM pressure”. Bigger stacks can aggressively target shorter stacks since they don’t need to fear getting knocked out of the tournament.

Shorter stacks may sometimes need to pass up on plays which would technically carry a positive expectation in terms of chip amounts but would technically be losing plays in terms of real monetary values due to ICM pressure. See the glossary entry under ICM for more information on this topic.