WWSF stands for won when saw flop and is a measure of how often a player goes on to win the entire hand after seeing a flop. 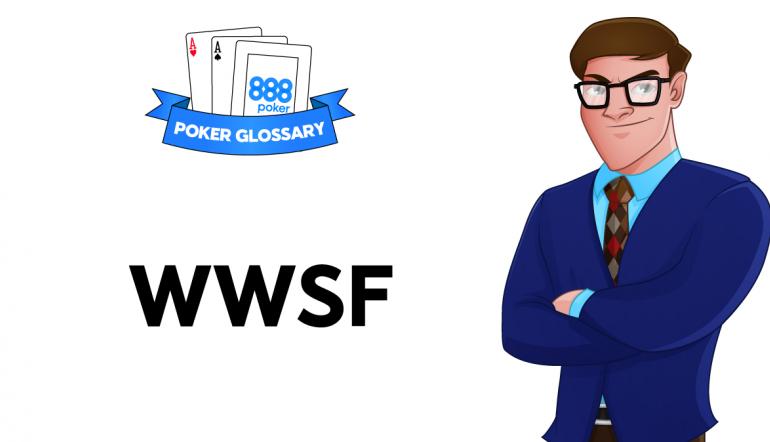 WWSF stands for won when saw flop and is a measure of how often a player goes on to win the entire hand after seeing a flop.

The method in which a player wins the pot (either through getting folds or at showdown) is not important in the context of this stat.

A player could therefore have a high WWSF percentage by getting his opponents to fold a lot or by winning a lot at showdown (or both).

What Does a High WWSF Mean in Poker?

A high WWSF (usually above 50%) means that a player goes on to win the pot with a high frequency after seeing a flop. This might be achieved by bluffing aggressively, but it also might be achieved by simply having a strong range of hands when seeing the flop. The stronger the range of hands that sees the flop the more often a player can expect to win at showdown which increases the WWSF.

What Does a Low WWSF Mean in Poker?

How does WWSF Affect the Red Line?

On the flip side, players with a high WWSF do not give up as much postflop and often have better red lines. Of course, this is not the only factor (preflop play must be considered also), but generally high WWSF = higher red line.

Which are the Other Stats Similar to WWSF?

What Should My WWSF be in Poker?

It is generally considered that WWSF should be around 50%. Depending on play style many players have a WWSF a few percent high or lower than this. However, if WWSF is significantly different from 50% over a decent sample size of hands it usually indicates that the player in question has issues with their game (leaks).

What Types of Players Have a High WWSF?

A high WWSF does not always guarantee a specific type of player. For example, one player might have a wide postflop range but achieve a high WWSF by bluffing a lot. Another player might be on the passive side but have a high WWSF because he only sees the flop with a very tight range. WWSF is therefore not always especially useful by itself but can definitely carry more meaning when analyzed alongside other relevant poker stats.

Good poker players typically have WWSF values around 50%. If our WWSF value is significantly different from 50% it may indicate that we have leaks in our game.