888poker digs into the history of The Dogs Playing Poker series. It’s a cult classic, personifying a group of dogs battling it out across a poker table 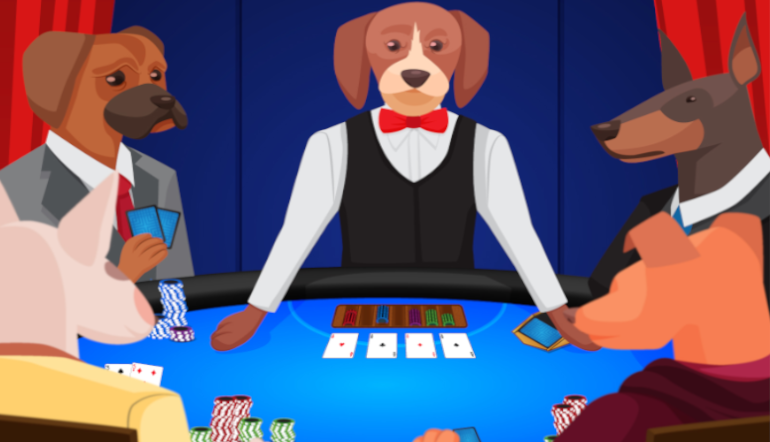 Around 130 years ago, our great grandparents were fooling around with sticks and hoops or having park picnics in polka-dot pinnies. But a guy called Cassius Marcellus Coolidge was hard at work developing his own brand of art.

You’re probably not too familiar with his name. But you’re sure to recognise some of Coolidge’s work, especially an iconic series of canine-themed poker paintings.

The art in question is The Dogs Playing Poker series. It’s a cult classic that shows the personification of a group of dogs as they battle it out across a poker table. These paintings are what we’ll discuss in this article.

Thanks to the wonders of the internet, we’ve managed to dig out the pictures at DogsPlayingPoker.org. We can give some of them a goggle now. 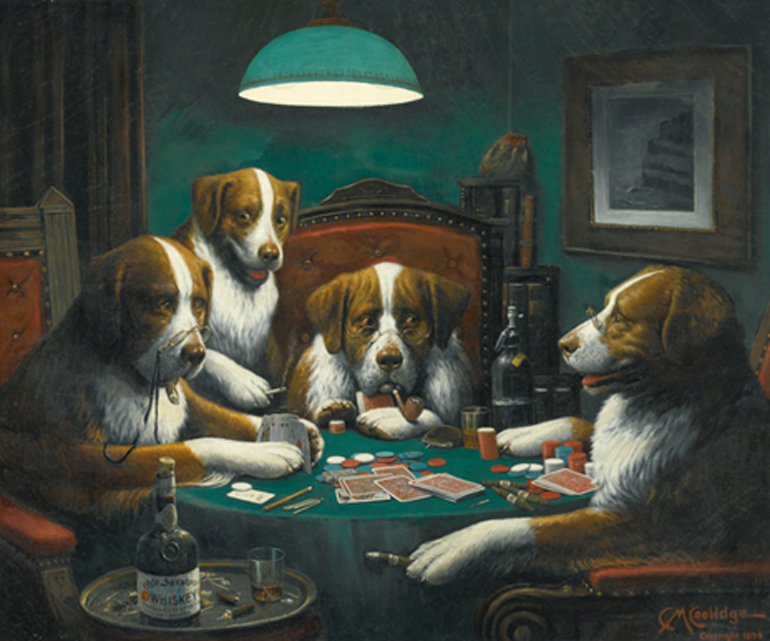 This picture, painted in 1894, was the piece than began the whole saga. It wasn’t unheard of for artists to personify dogs on the canvas like this. But a consensus exists that Sir Edwin Landseer’s 1840s picture, Trial by Jury, was a likely inspiration for Coolidge’s initial piece.

Indeed, Landseer seems to be the first artist to show dogs in a poker setting.

Trial by Jury shows a group of dogs in a courtroom. Due to the mutual choice of animal, in particular, it’s easy to see why people would make the comparison between this and Coolidge's poker pieces.

With that said, the artists take two very different approaches:

Coolidge's personification is far more exaggerated than Landseer’s too:

The most significant difference is that Trial by Jury shows dogs acting like humans. In contrast, The Poker Game depicts people that look like dogs.

If it’s true that Trial by Jury was a source of inspiration for Coolidge, it’s clear to see that he added his own twist.

Here it looks like the dog on the right is sliding out a big stack of red chips. His opponent on the left is waiting to pounce with 4-of-a-kind, a hand

We’ll see a lot of this hand in the collection. 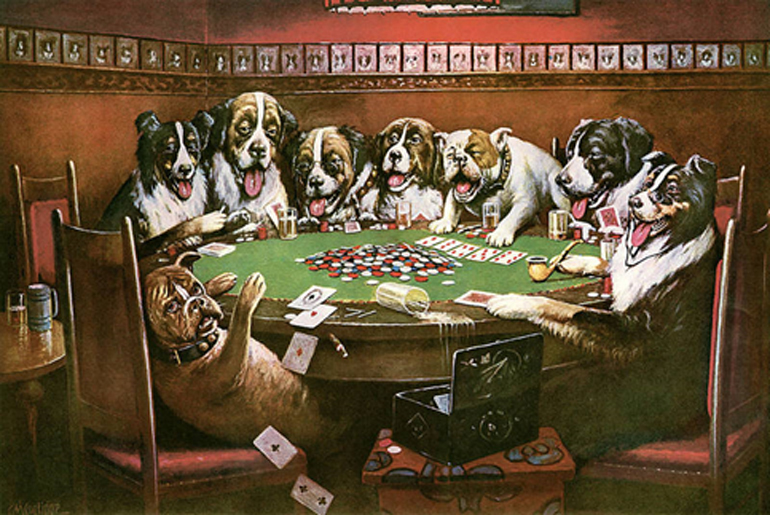 Ten years after Coolidge’s first picture, the next project was ready. The Poker Game was initially a stand-alone item. But the painting later led to a 1903 commission from a company called Brown & Bigelow. They asked Coolidge to paint a series that they could use to advertise cigars.

This image, along with the rest of the pictures in this article, was one of that collection.

We see bulldog on bulldog action as quad aces get crushed by a straight flush. The scene looks like a cold-deck setup due to the insanity of the hand and the seating arrangement.

It’s as if a group of gangsters or hustlers are working on their mark - an idea that we see elsewhere in the collection.

In any case, the scenario is very familiar to poker players. The bad beat! Coolidge's depiction of the losing dog is fantastic.

We can all sympathise with this unfortunate brown bulldog. Poor guy. 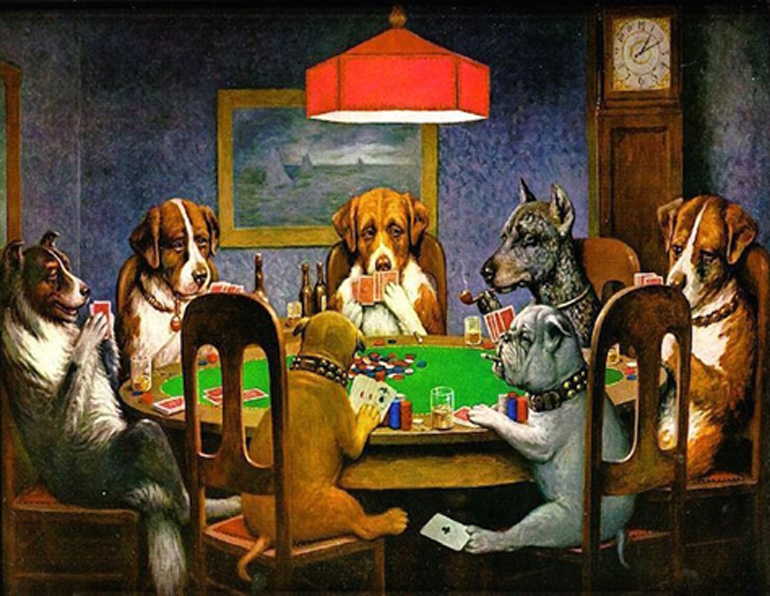 This picture is one of the most popular in the collection. It’s a perfect example of the mischievous nature that these dogs show throughout the series.  In the real world, dogs aren’t famed for their dexterity. But here, we see a cigar donning bulldog slipping an ace under the table to his co-conspirator canine.

One of the exciting things about his collection is how Coolidge so casually displays cheating. We are given a behind the scenes view of the whole thing. So, it’s easy to feel as though we are involved in the scam.

It trivialises the cheating a little when added to the hilarious notion that a bulldog is smoking a cigar and shooting whiskey while passing an ace with its foot.

This sense of comedy is one of the driving forces behind the pictures’ popularity.

As Coolidge no doubt intended, this causes us to focus more on the comedy in the situation. We ignore the magnitude of what is going on. After all, if we saw this in our own home game, the player would almost undoubtedly get banned for life.

This presentation might also have something to do with the state of poker in the late 19th century when these paintings were produced.

We saw this in the Poker Sympathy picture we looked at earlier, in what looks to be a group of doggy gangsters running a cold-deck scam. It also crops up in another painting from this series, Stranger in Camp, seemingly showing a street hustler on the right side of the same cooler.  It all seems a bit suspicious…

Remember, old-school poker was worlds apart from the regulated casino and online games that dominate the industry today. As many Doyle Brunson interviews will confirm, poker was dangerous, even in the mid-late 20th century.

Gangsters, hustlers, and shotguns were everywhere. Cheating is something that’s always frowned upon. But Coolidge's blasé portrayal suggests that it was commonplace in the 19th century.

This sleazy stigma still exists outside of the poker world to some extent. Those unfamiliar with the industry still associate the game with the gun-slinging gangsters in the movies.

The motivation behind Coolidge’s portrayal of poker’s questionable integrity is a topic for debate. But what seems evident is that, in the poker dog world, bulldogs can’t be trusted. 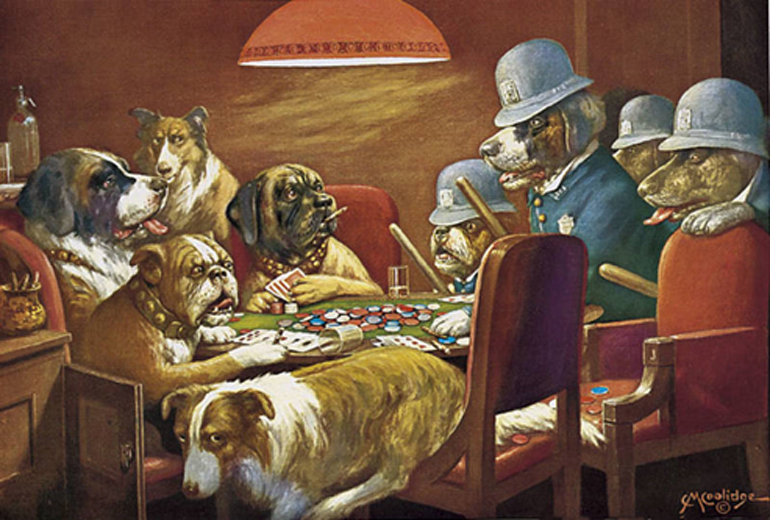 This picture shows the police storming a poker game. Once again, we see a bulldog with four aces. It’s unclear whether the police are storming the game because it’s running illegally or if they are trying to apprehend the bulldog. In particular, the police are all looking at him specifically.

In either case, it seems the dog in the foreground doesn’t plan on sticking around to find out why.

We’ve already covered Coolidge’s representation of poker’s integrity above. But this picture is another example of how Coolidge alludes to the prominence of dishonesty and corruption in poker.

We’ve already seen that Coolidge likes to have themes running through his work, such as the following:

But he takes this one step further in the final two paintings we’ll look at, which work as a pair. 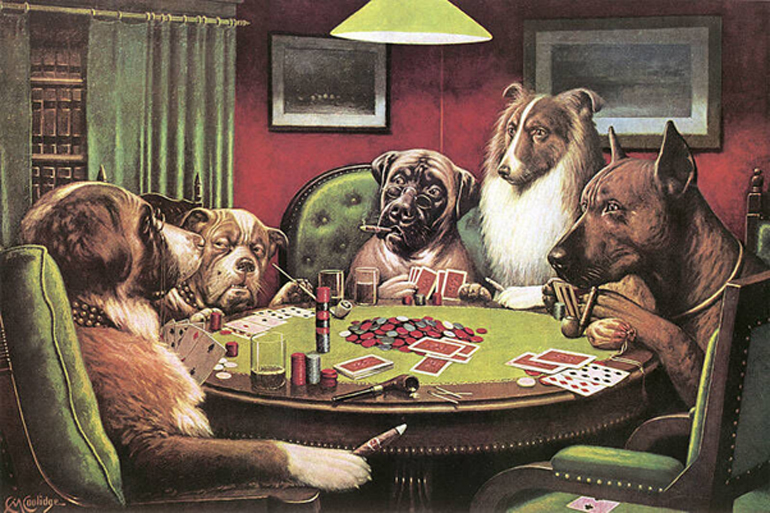 Thanks to the title (and follow-up picture), we can see that the first painting shows a dog sliding out a colossal tower of black and white chips with a pathetic pair of twos.

Since there are many exposed cards, it seems as though the hand is over.

The expressions of anger and suspicion accurately mirror those you’d see in human card-rooms three or four hundred times a session.

The bulldog’s leer is priceless - It’s clear he smells a rat.

But our audacious hero remains unfazed, sitting relatively relaxed in his chair, trying desperately not to give anything away. It’s a good job that dogs can’t sweat.

With a clear title and action, the picture works as a standalone piece, which is to be expected. The sequel wasn’t painted until three years later.

The best thing about this painting is how much it comes to life when we pair it with its 1906 counterpart, Waterloo. 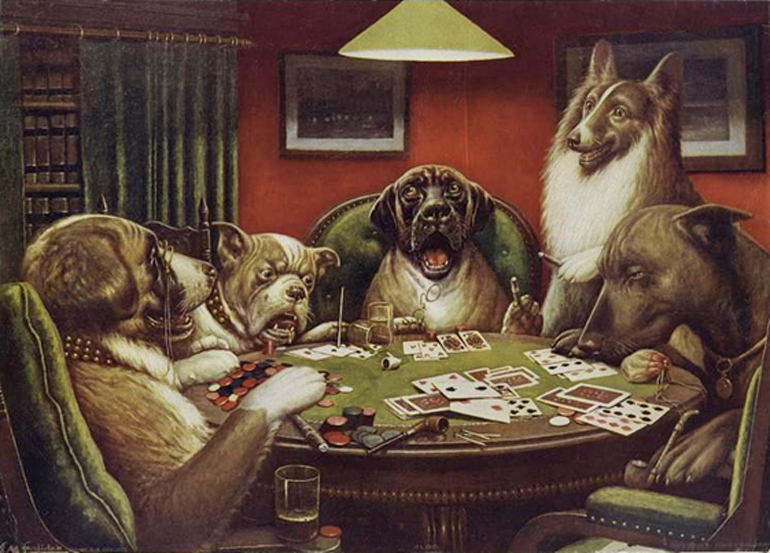 A Bold Bluff’s sequel, Waterloo, shows the other players' reactions as our hero shows his fearless bluff and scoops the pot. It's safe to say this is one puppy yet to be neutered!

As most of us know, there are few feelings worse in poker than being shown a bluff. While you might learn to control the tilt in time, it always stings a little, no matter how good you get.

The thing with bluffs is that they often elicit different reactions, usually tied to how directly you were impacted.

Coolidge clearly understands this. The picture shows the range of emotions that bluffs are usually met with by players.

We can tell a lot about a player by how they react to being bluffed.

Typically, we associate raw anger with likely losers. We attribute a more calculated and reserved reaction to someone who has a more deeper understanding of the game. These pictures do a great job of showing just how powerful emotions are at the tables.

Since poker is usually dressed up as a casual game with friends, it’s easy to forget that your goal is to ruin your opponent. When all is said and done, there always has to be a loser, and everyone is doing whatever they can to ensure it’s not them.

Poker is warfare with cards, which makes the picture’s title particularly clever.

Waterloo carries connotations of the brutal and bloody Napoleonic wars.

It’s a great touch by Coolidge. It’s no accident either since the picture was originally named Judge St. Bernard Wins on a Bluff.

All in all, it’s easy to see why this collection has become so popular: Somehow, the pictures are relatable, comedic, and ridiculous all at the same time.

The way the artist captures poker emotions so perfectly suggests that Coolidge had spent his fair share of time at the poker tables. This experience is what gives the paintings that air of authenticity.

But what do you think? Why not check out the whole collection and drop us a comment!