888poker presents a hand from the ARIA 2016 SHRB with hand analysis from poker pro, Byron Kaverman as he faces off against Jason Mercier. 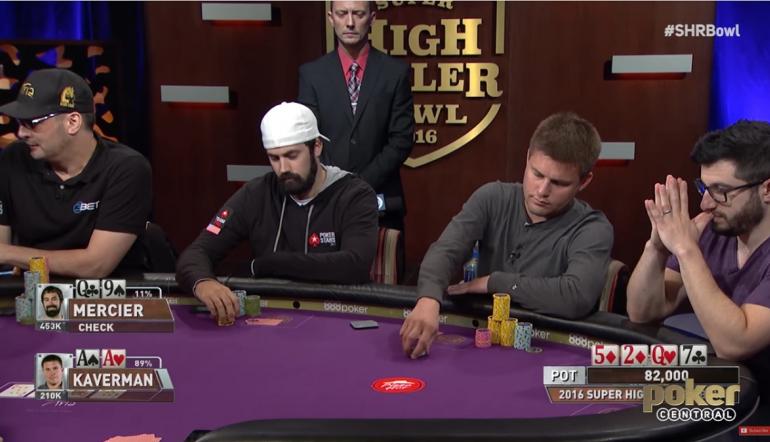 The 2016 Super High Roller Bowl at the ARIA in Las Vegas saw 49 players put up the $300,000 buy-in their shot at a $5 million first-place prize and one of the most prestigious titles in all of poker. Given all the action was filmed for worldwide broadcast on NBC Sports, we at 888poker thought it’d be fun to not only identify the biggest hands, but to also offer analysis on them straight from the pros.

In this hand, which occurred in the second episode of the 2016 SHRB, Byron Kaverman picked up pocket aces against Jason Mercier. There were many time extensions used, and eventually, a big laydown was made. Below, we highlight the hand and get Kaverman’s take on how things played out.

Before we get to that, it’s important to remember that the Super High Roller Bowl was played with a “Shot Clock,” which gave players 40 seconds to act on their hand. Such shot clocks are designed so there is no excessive tanking.

However, each player was also provided with five time extension chips per day, each of which granted the user and extra minute to act on his or her hand.

Mercier checked from the big blind, Kaverman bet 17,000, and Holz folded. Mercier then called, the dealer burned and turned the 7♣, and Mercier check-called a bet of 30,000. 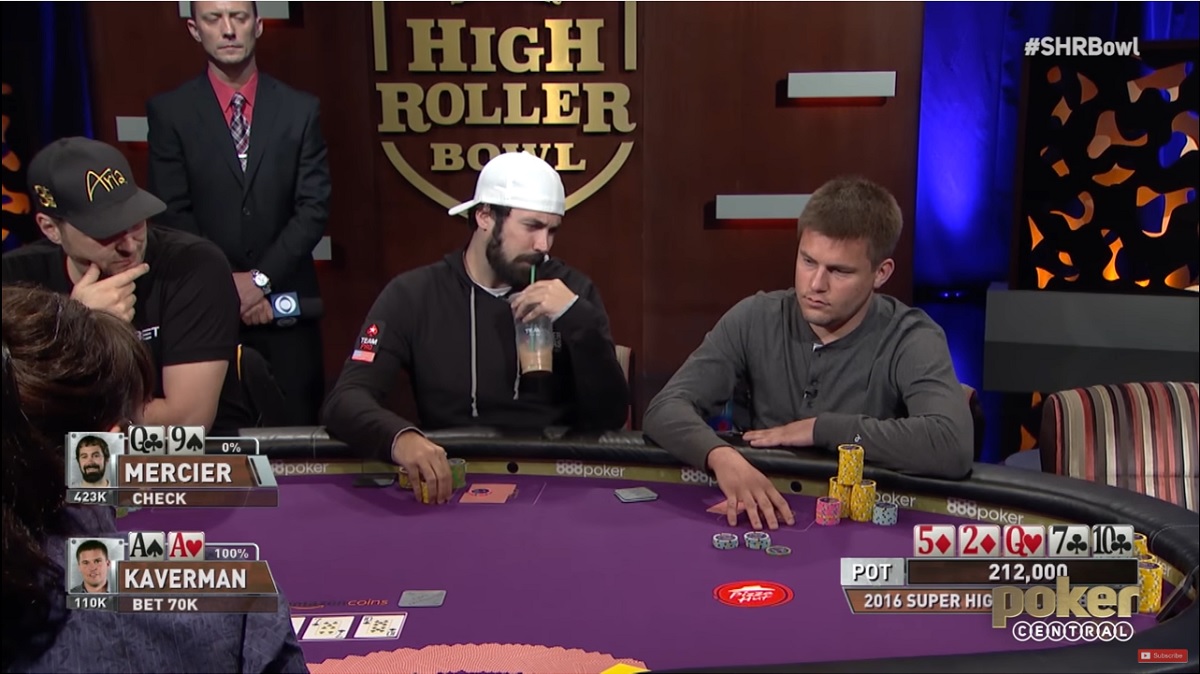 Kaverman eventually bets 70,000, and it was Mercier’s turn to hit the tank.

“It's a spot where he knew that I knew most of his range is Qx,” explained Kaverman. “I was thinking about my value-to-bluff ratio - given the strength, I showed on the flop and turn along with different bet sizes, and what they could be designed to attempt to fold out, had I been bluffing.”

For Kaverman, betting 70,000 into a pot of 142,000 essentially told Mercier that 50% of the time he was betting with the best hand, while the other 50% of the time he’d be bluffing. It’s a tough spot to be in, and in this hand, Mercier had to decide.

Mercier used three time extensions and then laid down his hand.

“Ultimately, he made a good fold, although I did get some value with his time bank,” said Kaverman.

“I'm a big proponent of shot clocks in tournament poker, and I think the trend ARIA has really got going will continue throughout many of the big events,” said Kaverman. “I think they sometimes are used strategically in the later stages, but generally are too valuable to spare.”