888poker presents a hand from the ARIA 2016 SHRB with hand analysis from 888’s Dominik Nitsche as Dan Smith faces off against Phil Hellmuth. 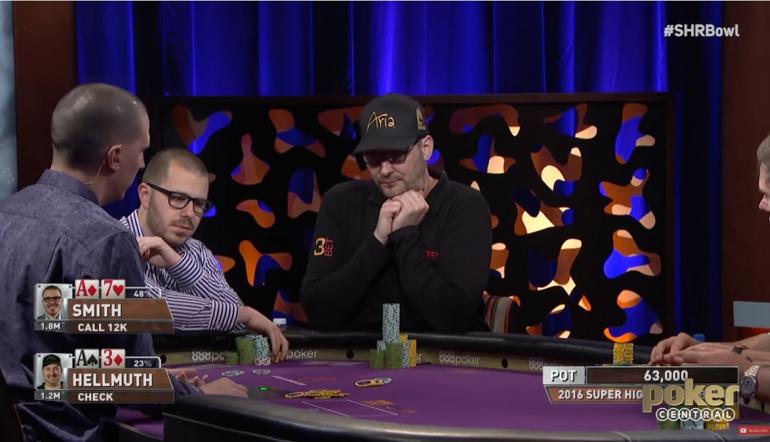 In this hand, which occurred in the fifth episode of the 2016 SHRB, Dan Smith and Phil Hellmuth limped from the blinds preflop both holding an ace. It ended up getting one in trouble. We asked 888poker Ambassador Dominik Nitsche to break down the hand for us.

“I will start with the first major decision point which is preflop,” Nitsche began. “Dan Smith is choosing to just limp in here blind against blind, and it's a play you will frequently see for world-class players in tournaments. The reason for that is simple. We are getting a great price to call, and we don't want to be giving too many walks. If we raise every hand instead, it becomes too easy to play against us as we are out of position. I strongly believe a strategy of mostly limping in from the small blind here is best.”

Of course, this is not to suggest you should always limp from the small blind. If you do, too often you’ll be limping with good hands and giving your opponent a free flop with his or her bad hands. For heads-up play, Q7 (AKA “The Computer Hand”) is the exact middle of the 169 distinct starting hands. If you have better than that, chances are you have the best poker hand. As with most things in poker, what you should do is dependent upon a number of different factors (i.e. starting hand, opponent, chip stacks, etc.), so DO NOT adopt a blanket strategy where you are always limping from the small blind.

“Dan decides to lead out here, and I will say it's a good play for a couple of reasons,” Nitsche explained. “First of all, he doesn't think Phil is very likely to have an ace. Think about it. He would most likely raise or even go all in here for 30 big blinds. He is very rarely checking any ace preflop; this is even more true the shorter the stacks get. Therefore, I wouldn't even be surprised if Dan chose to play a strategy of betting literally every single hand in his range.”

Unfortunately for Hellmuth, the fact that he had disguised his ace was now costing him chips. When the 5♥ appeared on the turn, Smith bet 85,000 and again Hellmuth snap-called.

“It’s a card that typically doesn't change too much as Phil Hellmuth’s holding most likely is some sort of 7-4 or a flush draw,” Nitsche continued. “Dan has the nuts as far as he is concerned, and he is looking to build the pot with a very strong hand. A big bet is in order, and even if he didn’t have a made hand, he could have bluffed here since it's incredibly hard for Phil to have a hand that can comfortably call down.”

After the J♠ completed the board on the river, Smith bet 200,000 and Hellmuth wasted little time in paying him off. 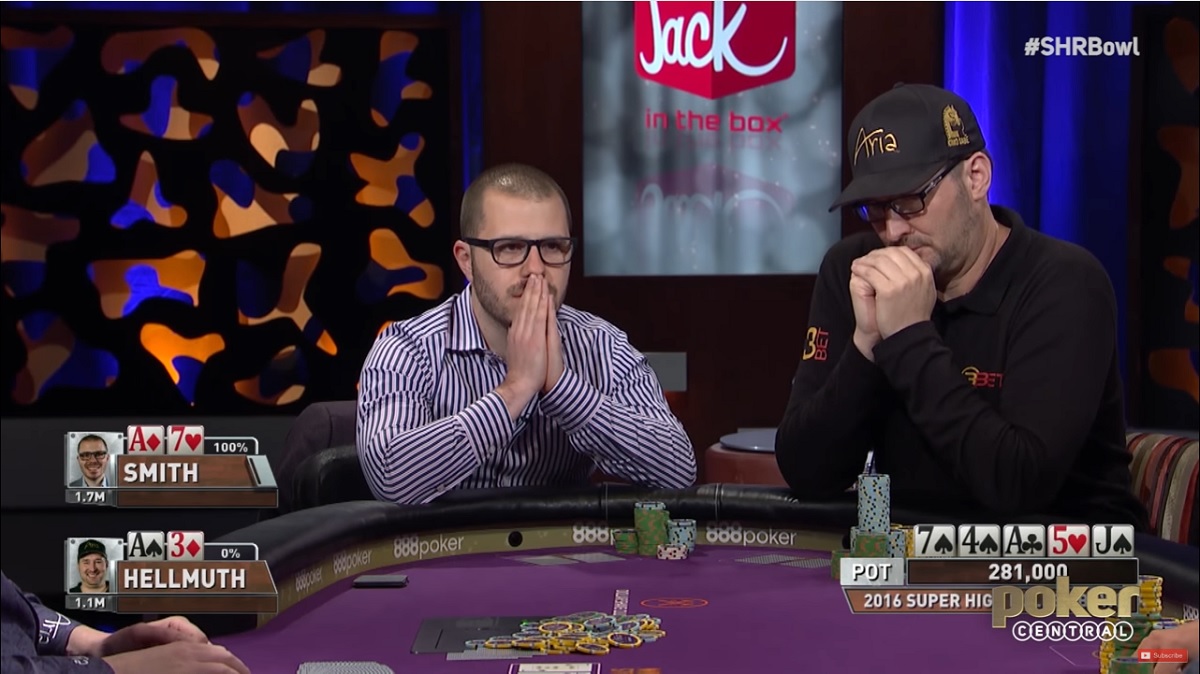 What does Nitsche think?

“While the river looks like a scare card, it really isn't all that scary when you are sitting there with A-7,” he said. “Basically, the only way Smith is beaten is if he ran into a flush. But there are countless other hands that he is ahead of, many of which will snap-call the river. A bet here is clearly the play. Hellmuth never has A-J -- he would raise preflop -- or any sort of set as he would also raise or jam postflop. Therefore, we only need to be worried about the flush, and in a pot where ranges are as wide as they are blind vs blind in a limped pot, Phil simply won't have a flush that often.”

Indeed, this is a spot where Smith has to bet. Had the river been a legitimate scare card, such as a four, five, six or eight, then a check would be reasonable. As it played out, it appeared Hellmuth held either an ace or worse two pair, both of which Smith wants to extract value from. Of course, if Smith bets the river and Hellmuth either raise or jams, that would be indicative that he was in fact on the spade flush draw. However, if that were to happen, Smith would have a relatively easy fold.

“I highly doubt he ever considered checking the river,” Nitsche concluded.