What is Tank in Poker?

To tank in poker means to spend time thinking about the best play in a hand. It is presumably a contraction of the words ‘time bank’, the option to request more time on a decision when playing online poker. A player can be described as ‘tanking’ or ‘going into the tank’ when they spend time pondering a decision rather than acting immediately. 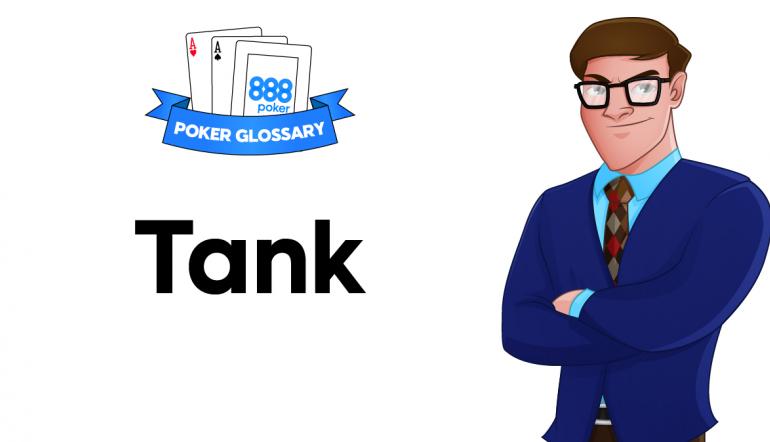 At some point in history, the term “time bank” became abbreviated into “tank” to describe a player who is taking a while to make a decision (regardless of whether his time bank was activated). E.g. “we shoved the river and villain tanked hard before folding”.

Although no time bank usually exists for live play, there have been measures instigated in recent times to prevent players from timewasting and excessive holywooding when making decisions.

It a player is taking too long to act in a live setting, his opponents may have the option to “call the floor(man)” who will usually set a clock. Some live tournaments are even attempting to implement time tokens where a players needs to exchange one of his tokens if he wishes to take longer than normal to make a decision.

Example of Tank used in a sentence -> Villain tanked the river for several minutes before finally folding.

How to Use Tank as Part of Your Poker Strategy

For online players, all are given equal time banks. We should not be afraid to take our time making decisions. When we face an opponent who doesn’t think as deeply, we’ll often have an advantage purely by making use of a free available resource.

For live players, a balance needs to be found. We should not be afraid to take time making our decisions, but we also want to be reasonable and respectful to our opponents. Excessive tanking is considered bad etiquette and even an angle shoot in some cases.

On the flip side of the coin, while we should be patient with tanking opponents, we should feel comfortable calling the floor if we feel a line has been crossed.