Not all starting hands in Texas Hold’em are created equally, so you need to know which ones to play and from which positions at the table. 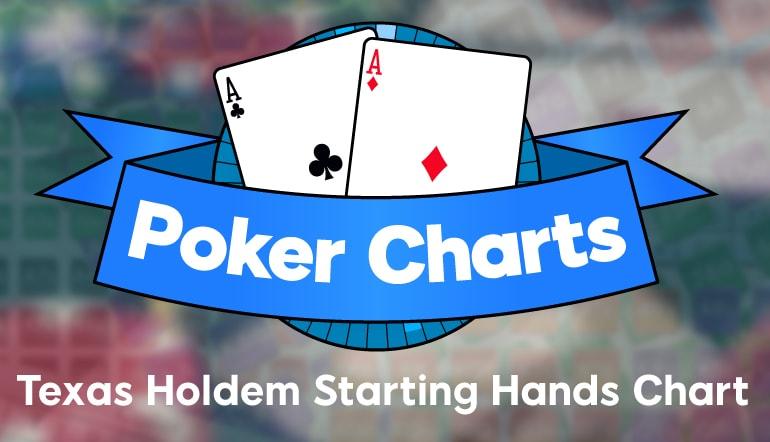 A lot of success in poker comes from choosing the right hands to play. Seeing as all hands are NOT created equally, you shouldn’t always play the same starting hands from one position to the next.

Generally, it’s also a good idea to play fewer hands from early position (to compensate for the likeliness of having to play out-of-position post-flop). You can open/play more hands from later position, simply because of the considerable information and other benefits that being in-position during a poker hand can provide.

As a bottom line, if you play too many starting hands (including too many garbage hands), then the negative results of doing this will be compounded throughout the hand. You’ll find yourself in difficult-to-navigate, unprofitable post-flop spots.

If you play too few hands, though, the blinds will eat you up, orbit by orbit. You’ll have a tough time supplementing these micro-losses because of the super-tight image you’ll have. When you actually do pick up a hand, no one will want to give you action.

As a starting point in determining which hands to play, it’s essential to know which ones are the best and why.

Below is a chart of the Top 10 Starting Hands in Texas Hold’em: 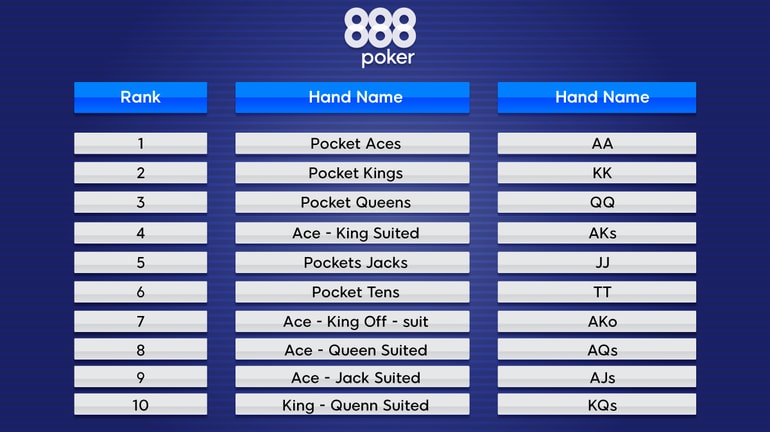 You’ll notice as a common thread in this chart, virtually all these combinations of hands contain various mixes of face cards, which just go to show the power that high cards hold in poker.

Often, a mere pair will be the winning hand at showdown (if that!) Therefore, if your cards are higher than your opponents before a flop is dealt, then you probably have a better chance of winning the hand at showdown. 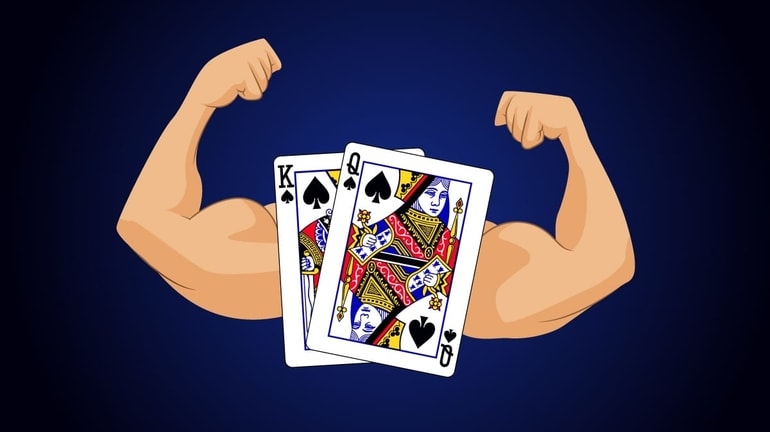 You’ll also notice from the chart that pairs are generally better than their unpaired counterparts.  Even though many of these “two unpaired overcards vs smaller pairs” are usually referred to as “coinflips”, the slight edge is awarded to the pocket pair.

For example, in a match-up of QQ vs AKs, the Ladies are likely to win a whopping 54% of the time. While this may seem like a small edge, over time, it will add up, and the variance will even out to be in the Queens’ favour! Even 22 vs. AKs (while much, much closer in equity) still gives the pocket pair a small advantage, putting it at 50.1%!

Why is AKs higher than pairs such as JJ and TT in the Top 10 starting hand list, then?

The answer to this question centres around playability.

It’s going to be easier to play AKs because either you’ll hit top pair, and be able to play up front, or you won’t and can opt to bluff if you wish. In other words, it becomes pretty straightforward with how you should proceed with the hand. (With the suited combinations of Ace-King, you can also pick up additional equity more easily with flushes or flush draws).

On the flipside, with pairs like JJ and TT, you already have showdown value in the form of a pair. But these pairs become much more challenging to continue with when an overcard (or multiple overcards) come on the board.

Even if you think your opponent is bluffing in a hand, it can be difficult to call down three streets with something that’s essentially 3rd pair on a board with two overs.

You may have noticed that AKs ranks significantly higher on the list than its off-suit counterpart. As mentioned before, AKs has greater playability than AKo. Whenever cards are suited, they have better potential of flopping or turning 4-to-a-flush, which means they’ll have higher poker equity to win more often.

Having flush draws can also give players a good enough reason to bet as a semi-bluff. As you likely know, when you play aggressive poker by betting or raising, you have the opportunity to push your opponent off the pot and make them fold, awarding you the pot, as well. 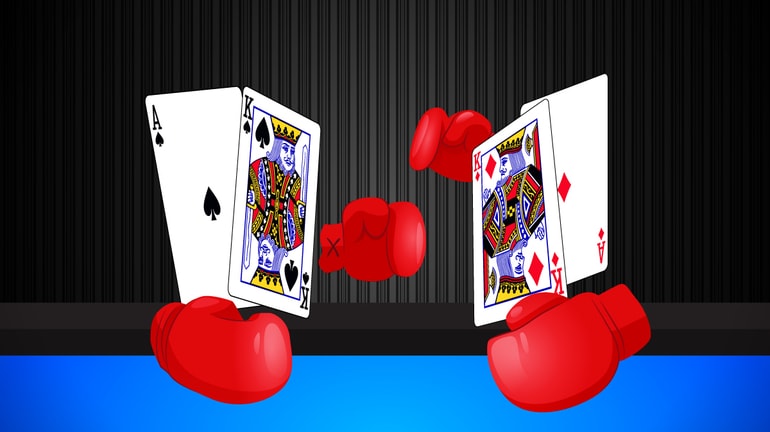 Note that a suited hand has a 5% equity advantage over its off-suited counterpart! This fact means that if two identical hands (in terms of value) got it in preflop, the suited one would have 52.5% equity, while the off-suit hand would have 47.5% equity.

Even though it’s not a substantial amount, it helps to show the value of playing suited hands more than unsuited ones.

In poker, it’s helpful to know some common nicknames for various hand combinations. This way, if you ever wanted to reference your hand with a friend, it’ can be a natural alternative.

Additionally, if you’re ever fishing for information from an opponent on what they held during the hand, some players will refer to what they had by its nickname.

Therefore, it’s valuable to know some of the most common poker hand nicknames, as mentioned in the chart below. 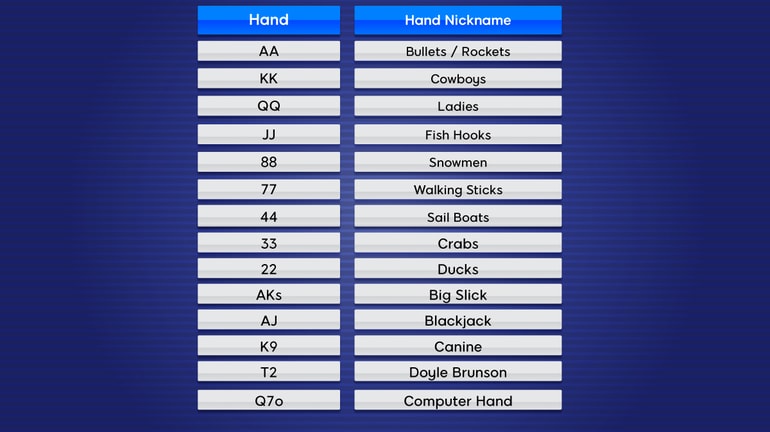 You’ll notice that most hands’ nicknames (especially the pocket pairs) describe the physical appearance of the hand. For example, pocket fours resembles the sail on a sailboat, while pocket deuces look like a duck sitting on the water.

For some of the other “miscellaneous hands” at the bottom of the list, here are the reasons for their nicknames:

AJ – Blackjack: These two cards in the casino game of blackjack are the best cards that can be dealt, and award a player, 21, and automatically paying them 3 to 2 on their bet.

K9 – Canine: If you phonetically say the letter “K” and the number “9”, it sounds like this synonym for a “dog”.

Q7o – Computer Hand: Aptly referenced, as it has exactly 50% equity against a range of complete randomness (any two cards).

It’s important to understand that equity (the chance you have to win the pot at showdown at any given point in a hand) and playability are two primary factors when it comes to the best starting hands in Hold’em.

Simply having two high cards in your hand will boost your chances of winning against your opponent(s), especially if they are loose. Be sure to study a variety of starting hand charts (also available in this Chart Series of articles) to get an idea of which hands to open-raise with from each position, if the action has folded to you preflop.

Additionally, remember that hands can be referenced by a variety of nicknames and that it’s essential to always keep an ear open at the table, as they may be able to provide you with more information on what an opponent had.