What is Chip Dumping in Poker?

Chip dumping refers to the activity of deliberately losing chips to another player at the table.It’s something that criminals have been known to try in an attemptlaunder money they have gained by illegal means. The hope is that if they lose all their funds to another poker account (which they also own), that the original source of the fundsmight be lost. Of course, this is not the only reason why chip dumping might take place. Players might be illegal looking to exploit no-deposit bonuses or get ahead on various promotions offered by the room. Whatever the motive, chip dumping will end you up with all funds being confiscated along with a permanent ban. 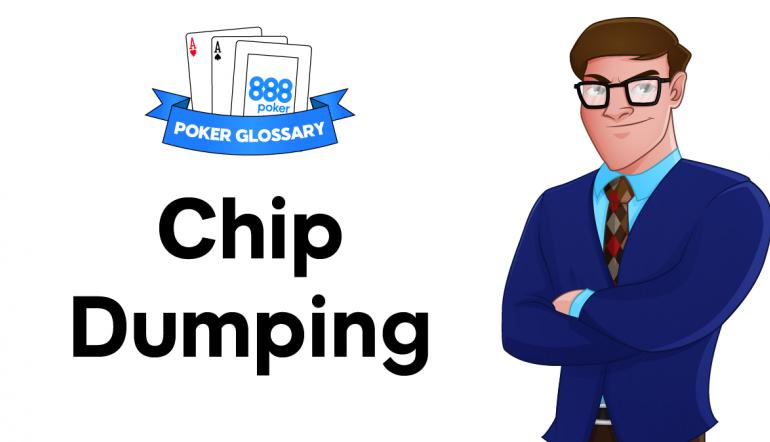 Chip dumping describes the act of intentionally losing money to another player at the table. The overriding intention is to facilitate an illegal money transfer.

Not all chip dumping cases are identical. Here are a few example cases.

1) A player has “dirty money” (i.e proceeds from crime, perhaps credit card fraud) and he wants to obfuscate the trail. He “loses” his chips to a second account (then maybe ever a third afterwards). Of course, the player owns all accounts in question, his end goal being to cash out his funds from another account under the guise of legitimate winnings. Tracing the original source of the funds will be difficult – this is referred to as “money laundering”.

2) A poker client does not offer a player-to-player transfer system and a player wants to make a quick transfer to one of his buddies. This might seem like a case of “white hat” chip dumping, but it is technically against all poker sites terms and conditions and can potential result in seizure of funds and a lifetime ban if caught.

3) A poker client offers a $10 no deposit bonus. This might not be a lot in itself, but a hacker figures he can create 100 accounts, dump all the chips to one account, and then cash out from there.

All serious online poker sites have a dedicated security team that look for suspicious activity. It’s usually impossible to monitor individual players due to resource constraints, so security teams typically look for outliers in the entire field of data. For example, one player appears to have a suspiciously high winrate over a decent sample. The security team knows that such winrates are not sustainable, so they begin to investigate individual hands payed by that player. They can also check if that player has received most of his earnings from a particular opponent. In such cases they would then proceed by reviewing individual hands played by those two players.

When chip dumping is performed badly, it usually only takes a small number of hands to prove beyond reasonable doubt what is happening. For example, player A 3 barrels all-in with Jack-high. Player B calls with T-high and player A scoops the pot. In all likelihood chip-dumping is occurring here. An isolated hand does not constitute proof, but if there are occurrences of similar hands taking place (especially against the same player), both accounts will be flagged for closure and seizure of funds.

Naturally, more intelligent chip dumpers my try to conceal their actions. For a start, they try and make their dumps appear like legitimate hands (no Ten-high call downs for example.) Also, while attempting to chip dump to a specific account, they take care to also splash large quantities of chips in the direction of random players at the table (to give the impression they are spewing money against everyone). Unfortunately, when such chip dumpers eventually get caught, some of the random recipients of their dumps may also be implicated in the chip dumping scam and have their accounts flagged by the site.
It’s important to remember that chip dumping is not a victimless crime and should be reported to the poker room if we suspect something suspicious is taking place. Not only do innocent players find themselves unintentionally involved, but chip dumping also assists in the money laundering of funds obtained from real world crime when allowed to take place.

Example of Chip Dumping used in a sentence -> If you spot any suspicious activity that appears like chip dumping it’s recommended to contact support.

How to Use Chip Dumping as Part of Your Poker Strategy

Security teams don’t always have the luxury of being able to see individual hand histories. They usually only peer into hand histories after a bigger trend has been detected. This means that the first wave of defense to protect against chip dumpers is the players themselves at the table.

Watch out for the following -

- Two players constantly involved in pots against each other.

- The flow of funds clearly in one direction.

- A number of unrealistic calldowns made by the losing player.

- A number of unrealistic value bets made by the winning player.

While we may occasionally be the recipient of a giant dump, chip dumpers are usually bad for the players at the table in general. Since the chip dumpers will often be playing for stacks, we’ll very frequently be forced out of the pots postflop after making an initial preflop investment.

In the case of suspected chip dumping, it’s recommended to send an email to the poker site’s support team, or to their dedicated security email if they have one.