What is Door Card in Poker?

Door card is a Stud term used to describe a player’s upcard on third street (the first betting round). In the initial Stud deal, players are dealt three cards – two face down (downcards) and one face up (upcard) which is visible to the entire table. The upcard gives clues regarding the strength of a player’s overall holding and is referred to as the door card or simply the door.The door card also determines who acts first in regular Stud games; the player with the lowest ranked door card acts first on third street. 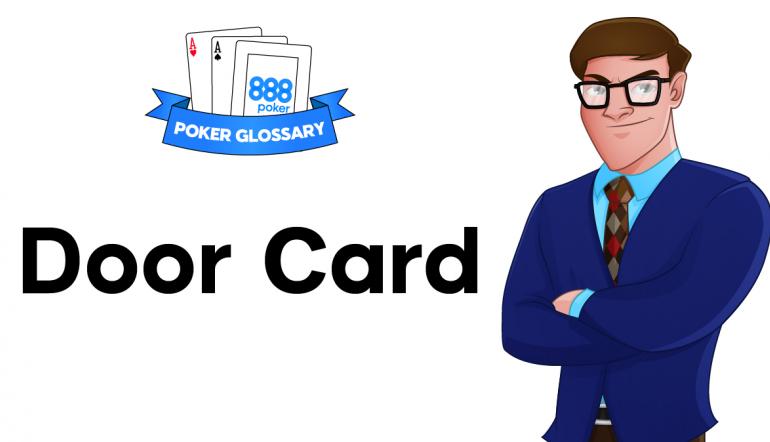 To understand fully the significance of the door card it’s necessary to have a basic knowledge of Stud games.

On third street (the first betting round) each player at the table is dealt three cards. Two of these cards are secret (called down-cards) while one of these cards is placed face-up on the table and visible to all opponents (called an up-card).

It’s also common for players to be referred to by the value of their door card. “Deuce bets” for example, would refer to the player whose door card was the deuce.

Example of Door Card used in a sentence -> If a player pairs their door card on fourth street, they are allowed to use the big bet sizing.

How to Use Door Card as Part of Your Poker Strategy

The door card has important strategic application in Stud for the following reasons.

1. It gives us a glimpse into the possible strength of our opponent’s holding.

2. Our door card might give us clues regarding how our opponent perceives our own hand strength.

Since stud games are primarily played as part of a fixed-limit structure, increments of either the small-bet or big-bet are used depending on the street. Ordinarily, the small-bet is used for both third-street and fourth-street. However, there is an exception that occurs in situations where players “pair their door card”.  “Pairing the door” is where the up-card dealt on fourth street carries the same rank as a player’s third-street up-card. In such instances, the big-bet sizing (sometimes referred to as a “double bet”) can be used on fourth street, although the option to use the regular small-bet sizing still remains.

Generally players who pair their door card should be given a lot of respect. The chance that they already have three-of-a-kind is high, and even if this is not the case, they might easily make trips or a full-house by the river.

It’s generally considered correct to make use of the double-bet on fourth the vast majority of the time the option is available, although there are some exceptions.