What is Quads in Poker?

Quads is a common nickname for four-of-a-kind in poker. In fact, the nickname quads is so common, that it has virtually replaced four-of-a-kind as the official name for this type of holding. It’s simply a lot easier to say that four-of-a-kind. Quads is made when we hold four cards all of the same rank. This leaves room for one kicker, since poker hands are made with 5 cards in the majority of variants. 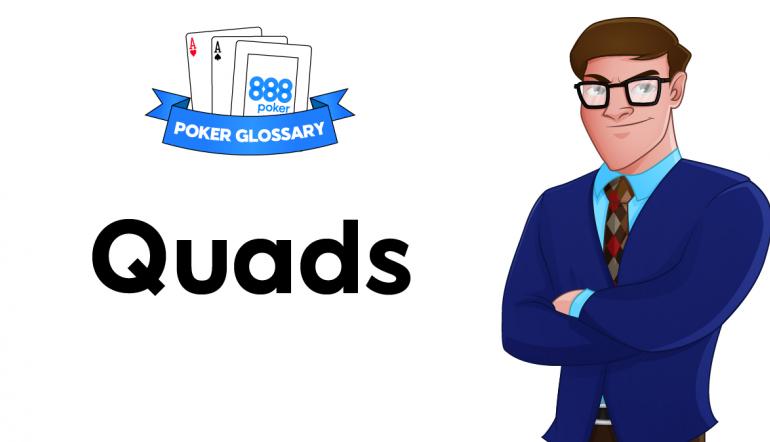 We make four of a kind when we hold four cards of identical rank. This leaves room for one kicker. Four of a kind is often colloquially referred to as “quads”.

For example, in Hold’em:

This almost never happens in Hold’em but in the above example both players make quads using pocket pairs. In scenarios where two players make quads, the winner is determined by who holds the highest ranked quads. Seeing as quads vs quads is so unlikely, some casinos offer a bad-beat jackpot where the loser (sometimes along with other players at the table) receives a huge payout from the casino.

A slightly more common scenario for two players making quads occurs when the quads appears solely on the board.

The above provides an example of the concept of “counterfeiting”. Hand 1 has a strong full house on the turn, Queens full of Kings. Once the fourth Queen appears on the river, hand 1 can no longer use his pocket-pair of Kings to construct his holding. He must use the four of a kind Queens since this is the strongest possible hand he can construct.

This leaves room for one kicker, so hand 1 uses one of his Kings as the kicker. Although hand 2 was more or less total garbage on the turn, it now improves to the best hand by the river. It makes quad kings with an Ace Kicker which beats hand 1’s King kicker. Hand 1 usually feels rather hard done by at this stage and this scenario is one of the many that are referred to as “getting counterfeited”.

Example of Quads used in a sentence -> We had a set on the flop but managed to make quads by the river.

How to Use Quads as Part of Your Poker Strategy

Any time we make quads using one or more of our hole-cards in Hold’em, we have the nuts. The only exception is making quads with a pocket-pair when there is a higher pair on the board (our opponent could theoretically make a better quads). This scenario is so unlikely it should mostly be ignored unless we are playing with exceptionally deep stacks.

Even in Pot Limit Omaha, quads is an exceptionally strong holding and is almost always worth playing for stacks with. One reason is that our opponent is unlikely to fold the nut full house (for example he holds JJxx on a JTT board and we hold the TTxx).

Remember that players must use at least one of their hole-cards in order to make quads in Omaha. Unlike Hold’em it is impossible to make quads with the board since this would imply that a player is only using one of his hole-cards to formulate his 5-card hand which is against the rules in Omaha (we must use exactly two of our hole-cards).