What is Two-pair in Poker?

Two-pair in poker is the hand made by holding two sets of pairs. In other words, we have two sets of two cards with identical rank e.g. KKAAQQ. The strength of a two-pair is always determined by the rank of its highest pair. So AA22K beats KKQQJ. Note that since poker hands are formulated with five cards, a two-pair type hand will leave room for one kicker. If two players have an identical two-pair, it is the kicker that determines the winner. Two-pair beats a pair but loses to three of a kind. 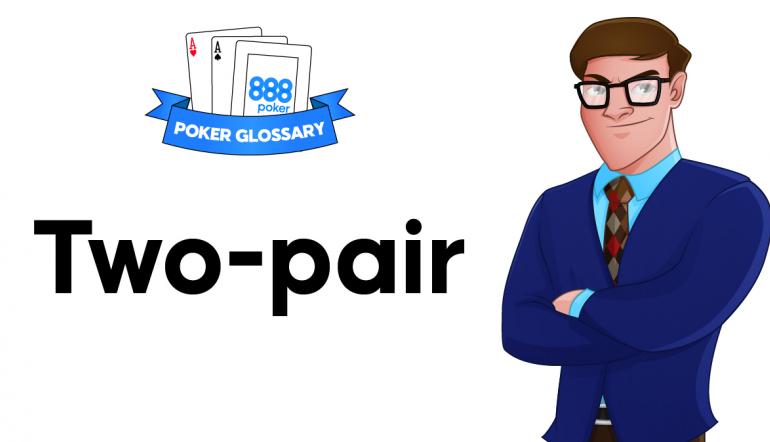 We make two-pair when we have two sets of two cards with identical rank. I.e two pairs instead of just one. (See above).

For example, in Hold’em -

Note that the strength of a two-pair hand is defined by the highest pair. In the above example hand 1 makes two-pair Tens and Jacks while hand 2 makes two-pair Aces and Fours. Hand 2 wins in this example because its highest pair is the strongest (even though its second pair is the weakest). In scenarios where two players share the same high-pair, the rank of the second pair is consulted. If both pairs are identical then the kicker determines the winner.

This above example has the tendency to confuse novice players since it might appear as if hand 1 has two-pair while hand 2 has one-pair. In some senses this is true, and hand 2 will often be colloquially referred to as “one-pair” since its second pair is made with the board.

Hand 2 is actually the winner here though since it makes a stronger two-pair. Breaking down each holding into its exact 5-card hand can be helpful.

In some senses this feels “unfair” since hand 1 paired both hole-cards while hand 2 only paired one hole-card. When two-pair hand is outdrawn due to the board-pairing this is referred to as “getting counterfeited”.

Here is another example counterfeiting. Both players make two-pair, Sevens and Eights as a result of the board. Hand 2 made two pair on the flop, Fours and Sevens, due to holding a pocket pair. Once the turned Eight completes two-pair on the board he can no longer use his pocket-pair to construct his 5-card hand since a better two-pair is available (Sevens and Eights). Since both players have the same two-pair it now becomes a battle of kickers. Hand 1 has an Ace kicker while hand 2 has a Jack kicker. Hand 1 hence scoops the pot despite not pairing its hole-cards at any point. We can describe hand 2’s pocket pair as having been “counterfeited”.

Although the absolute hand strength in both cases is two-pair, hand 1 is often referred to colloquially as “Ace high” while hand 2 is referred to as “board”. Notice how hand 2 doesn’t use any of his hole-cards to construct his final 5-card hand.

Example of Two-Pair used in a sentence -> Two-pair is much stronger in Hold’em than it is in Omaha.

How to Use Two-pair as Part of Your Poker Strategy

It is important to recognize situations where our two-pair hand has potentially been counterfeited. Any time we have made two-pair with our hole cards and a third card on the board pairs this is always bad for us.

A mid two-pair can hence turn very quickly from a strong made hand to an extremely mediocre holding. It will play more like a second-pair than a two-pair in terms of relative hand strength.

Two-pair holdings are typically very strong in No Limit Hold’em and may often be good enough to play for stacks with (assuming 100bb or so). It does however depend on the board runout. On textures where large amounts of straights and flushes are possible then the relative value of two-pair goes down. (I.e it might not be correct to get the stacks in with two-pair if we assume a flush-draw has already completed on the board).

In four-card variants such as Pot Limit Omaha, two-pair needs to be played with caution since there is a high potential for domination issues. Having a two-pair holding in Omaha might be considered similar to having a weak top-pair type hand in Hold’em. It might be good enough to extract some thin value, but it’s unlikely we’d want to get all of the stacks in unless playing shallow. Once again, the relative hand strength of two-pair in Omaha will depend heavily on the board texture.