What is Ratholing in Poker?

Ratholing is the act of cashing out chips from a cash game table then rebuying with a smaller amount of chips. It is considered unethical behaviour, and against the rules in many cash games. Interestingly,ratholing confers no specific advantage to the ratholer and no disadvantage to the other players at the table. In other words, there is no decent reason why ratholing should be considered unethical. It’s simply a case of players feeling bad that they can no longer win back the chips they lost to a certain villain. 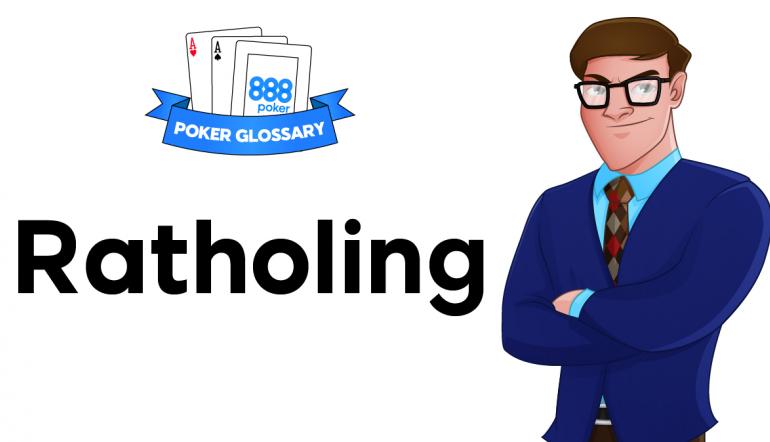 Many rooms have an anti-ratholing policy where players are forced to buy into a game with at least the amount they left it with. For example, we cash out of a game with 250bb. If we decide to re-buy into the same game after a short period of time, we would need to buy in for at least 250bb. This rule would typically even apply in games where the maximum buy-in was 200bb. Usually a time limit is associated with a rathole policy. Once the time limit is up, we are free to buy in again for any amount that is allowed.

Ratholing is considered unethical behaviour since it denies opponents the chance to win back their stack. For example, if we win 200bb from our opponent, promptly leave the table and rebuy in for 100bb, he can no longer win his money back the next hand.

Example of Ratholing used in a sentence -> Ratholing is a very popular way of avoiding deep play in the online fast format cash games.

How to Use Ratholing as Part of Your Poker Strategy

Despite the very negative way ratholing is viewed by recreational players, it adds zero advantage to the ratholer. Anti-ratholing polices curb perceived injustice rather than prevent legitimate angle shooting. Once a player has won his opponent’s stack, those chips are his. He is free to cash out of the game at any point. No mathematical reason exists why he should not be able to remove a number of chips from his stack and cash them out.

As we might imagine, more experienced players are somewhat confused by the existence of anti-ratholing policies. Then again, if it keeps the recreational players happy, perhaps there is something to be said for it. A surprising number of players to this day believe that ratholing confers an unfair advantage to the ratholer. Perhaps even the casinos and poker rooms themselves believe this myth, which is why such policies still exist today.