What is Scare card in Poker?

A scare card is card that potentially makes our opponent less comfortable about his situation (and hence more likely to make the fold when facing aggression from us). The term originated with Stud games where we are dealt an Upcard that is of high rank and/or co-ordinates with the rest of our board. It’s often used by Hold’em players describe a turn or river card which has higher rank than any other card on the board, although the concept of scare cards typically fits better to Stud games than Hold’em. 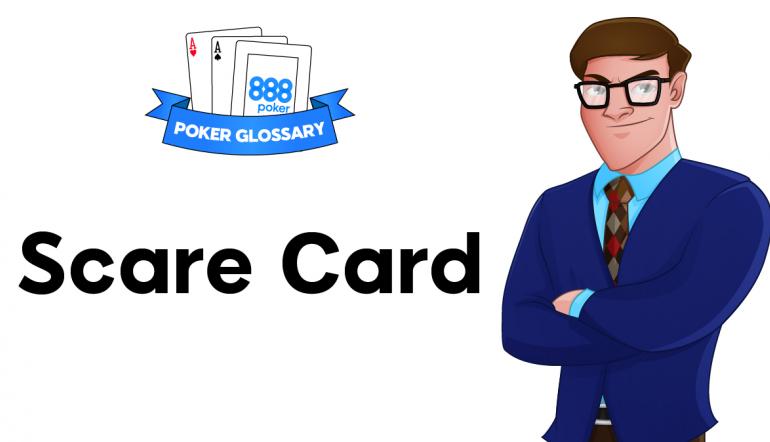 A scare card is one which we believe will cause our opponent to fold more frequently when facing aggression. Villain believes the card increases the strength of our holding and will hence be less inclined to play back against our bets.

Seeing as the topic of “scare cards” is most commonly used in a Hold’em context, it might be ironic to consider that not only does the idea of scare cards not originate with Hold’em, but it’s also highly debatable whether the idea is even especially relevant or applicable to Hold’em.

Instead, the concept of “scare cards” appears to be a misappropriation of commonly accepted Stud strategy.

Example of Scare Card used in a sentence -> (Hold’em) The turn card was a scare card so we continued barrelling as a bluf.

How to Use Scare card as Part of Your Poker Strategy

Some Hold’em strategy books present the idea that we should be barrelling aggressively every time the turn or river is an overcard to the board. The general premise is that we can represent that we have connected with these cards and use them as good bluff opportunities i.e. scare cards. However, relentlessly barrelling in Hold’em every time an overcard falls is a highly unbalanced approach. It results in a predictable and heavily exploitable strategy.

So how is this different in application of scare card strategy to Stud?

Imagine the boards read as follows on fourth street in a Seven Card Stud game:

Perhaps player 2 did not have the betting lead on third street, but he is now given the betting lead on fourth street since he has the highest ranked upcards. Note that on third street his holding was not especially threatening, but the Ace now serves as a scare card. Not only might player 2 now have a potential pair of Aces, but he now appears to be developing co-ordination towards a diamond flush. This might be a good time for player 2 to bet, representing that his hand is strong.

The key difference when discussing scare cards in Stud is that the Ad in this example belongs exclusively to player 2. It’s no problem if he plays extremely aggressively every time this spot crops up because he will often have the best hand. It’s also going to be somewhat difficult for player 1 to continue with a wide range given the strength of player 2’s board.

Hold’em players have tried to take this concept and apply it to Hold’em, but unfortunately this is an example of a concept that doesn’t translate that well. When a high card hits the board in Hold’em, both players can use that card to formulate their hand whereas in Stud, scare cards belong exclusively to one player or the other.