What is Stab in Poker?

Stab is simply another term for ‘bet’ in poker. It’s especially used in scenarios where lack of interest has been shown in the pot by other players at the table i.e. no-one seemed interested in the pot so we took a stab. It may also refer to a single attempt to pick up the pot without giving much thought to further action. However, usage varies quite widely and players may use the term stab to describe a bet without meeting any of the above criteria. 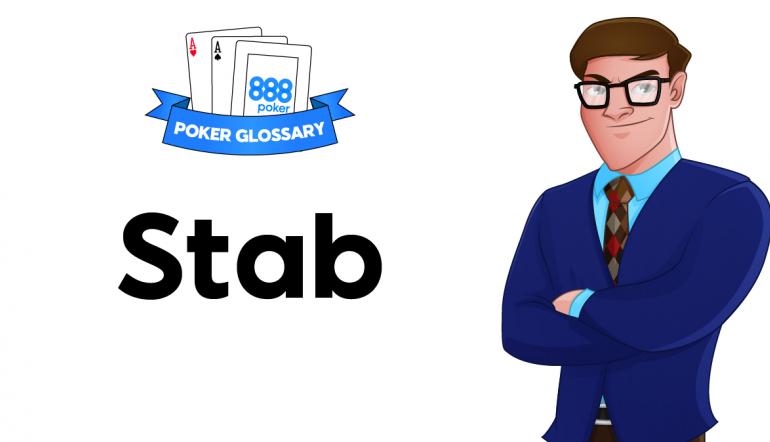 The “term” stab can be mostly used interchangeably with “bet” although it specifically carries the connotation of attacking a pot where lack of interest has been shown by our opponents.

Here, SB has the opportunity to fire a continuation bet after open-raising preflop but elects not to. We might imagine that if he flopped well he would look to fire a continuation bet. His check may potentially indicate a measure of disinterest in the pot. When BB decides to bet in-position vs the missed cbet (often referred to as a float bet), it may often be referred to as a “stab” (due to the disinterest shown by SB.

Here is another example.

Example of Stab used in a sentence -> We called the flop quite wide with the intention of stabbing the turn if villain decided to check.

How to Use Stab as Part of Your Poker Strategy

Identifying scenarios where opponents signal weakness and looking to take down the pot is an extremely important discipline in poker. It has the potential to make or break a players winrate.

An excellent starting point is to look for scenarios where our opponent has the opportunity to fire a continuation bet (on any street) and instead checks.

Making stabs in such scenarios typically has an above average chance of taking down the pot (often to the point where any two cards can be bet profitably). Identifying scenarios where any 2 cards can fired profitably is often a turning point in the career of many players.