What is Wheel in Poker?

The wheel is the nickname given to the Ace to Five straight. It has special significance in split pot and lowball games. Not only is the wheel the nuts in many lowball variants, but it also has enough firepower to potentially win the high pot in split pot variants. 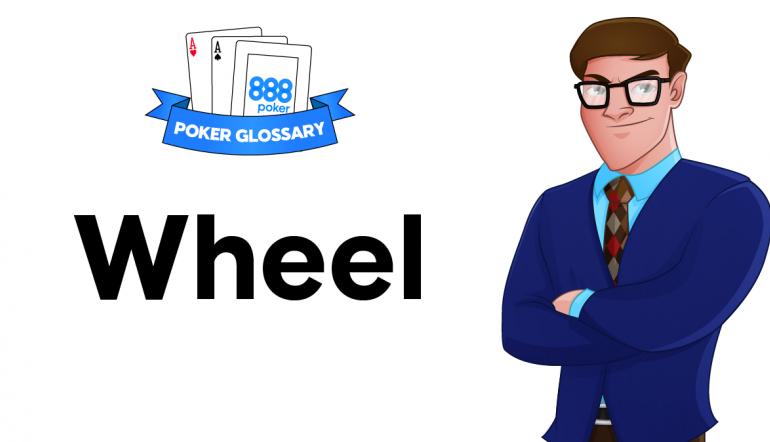 It’s common to use a range of colloquial terms to describe different types of poker hand. The Ace to Five straight is commonly referred to as the wheel.

How to Use Wheel as Part of Your Poker Strategy

The Ace to Five straight is a strong hand in the majority of poker variants, but by no means invincible. Its strength will often be determined by the likelihood that one of our other opponents has made an even stronger hand. For example, the wheel will be less strong in Hold’em if the board is paired. In Stud, the wheel will be stronger if our opponents’ boards are not co-ordinated.

In certain variants such as Stud hi/lo and Omaha hi/lo, the wheel is the nut low hand.

Knowing nicknames such as “the wheel” is not especially important, but we might find ourselves feeling left out of a poker discussion if we don’t know the term.

How Strong is the ‘Wheel’ in Hold’em?

The wheel (five high straight) in Hold’em can vary from being the stone cold nuts to a heavily dominated straight. If the board is paired and/or there are higher straights or flushes available the value of the wheel goes down.

How Strong is the ‘Wheel’ in Omaha?

Although the wheel in Omaha can potentially be the stone cold nuts it is generally very vulnerable to being outdrawn in Omaha. Like in Hold’em, if the board is paired and/or there are higher straights or flushes available the value of the wheel goes down significantly. As a general rule the wheel is a lot weaker in Omaha than it is in Hold’em.

What is the Significance of the ‘Wheel’ in Split Pot Poker Games?

The wheel is especially important in many split pot games because it is the best possible low hand as well as being a high hand with a lot of firepower. It’s therefore often strong enough to win both the high half of the pot and the low half of the pot at the same time (known as ‘scooping’).

What is the ‘Steel Wheel’ in Poker?