Poker can be a wild and crazy game in itself. Follow along as we speak to the pros about the most incredible things they've witnessed at a poker table. 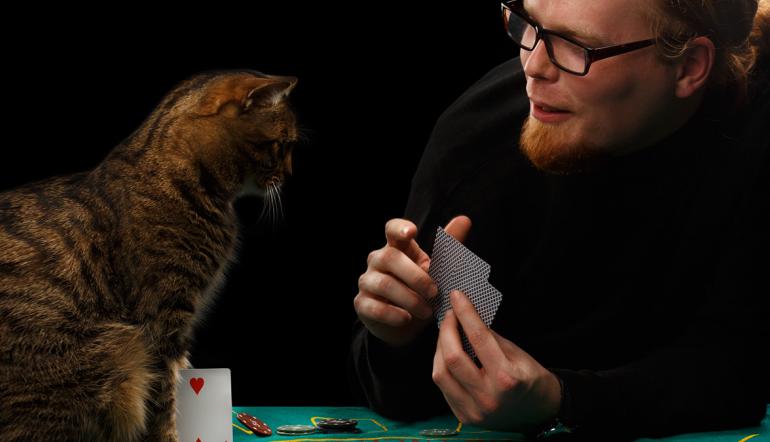 From Lion to Lamb

We start with the former Irish Open champion, Neil Channing, who tells us a funny tale from the World Series of Poker.

"I was in a one table satellite. A guy was getting a penalty from the floor. He went mad and was massively abusive," said Channing. "The floor man said if he didn't calm down, he would be disqualified. This made the man even angrier.

“He then was told if he didn't calm down he would be barred from the Rio. Security were called, and a crowd gathered, but it was late at night, and less than 30 people were still around.

“Then suddenly he changed and went all meek and mild. He accepted the decision and said he'd leave quietly. It was a pretty sudden transformation.

“Then somebody noticed he'd stolen the $1,800 in last longer bets and was chased up the hallway. Fortunately, he was caught by the door.”

Poker can get you are riled up.

Like this guy who once played out one of the strangest all-in and call experiences of Dave Nicholson’s life.

"I was at a private game in an undisclosed location," said Nicholson. "The pot was about £9,000, and the board was something like Q76. Two guys get it all-in. It's KK v AQ and the player with KK is a little Chinese guy.

"Before the dealer can finish the action, the little Chinese guy pulls a meat cleaver from his pocket and tells him that if he loses the pot, he's going to cut his head off.

“The dealer looked scared out of his mind. The KK held up; he breathed a sigh of relief, and everyone burst out laughing, including the little Chinese man.”

It's a good job the following dealer wasn't playing in that game.

“I remember playing a satellite to the High Roller tournament at EPT Deauville. The proper strategy in a satellite dictates that you take your time making decisions.

“The dealer didn't take too kindly to my acting and put her hands on her head and acted like she was sleeping while it was my turn. I have never seen anything like it in eight years of playing poker.”

What do they put into the macaroons in Deauville?

“I was at EPT Deauville one season. We were playing full ring, but the pot was heads-up on the flop. The dealer was fiddling about with the muck when they accidentally flipped over. One of the players noticed, and the floor was called.

“The ruling was that the entire muck had to be exposed to both players so there was the flop out there and 14 mucked cards on their backs.”

All You Need is One Card..

Here’s another great story involving a controversial decision made by the floor, as WSOP bracelet winner Jackie Glazier explains:

"The strangest thing I've ever seen at a poker table was during a WSOP Main Event. It was 2013, late on Day 2. A player, who hadn't played a hand for over 2hrs, open-shoved from middle position for 20bb. Play folded around to the button who snap-called, I folded my small blind and the big blind folded, as well.

"The dealer announced, "All-in and call", and with action complete asked the two players to turn over their cards. The all-in player turned over ace-jack suited. The player on the button looked at the dealer and stated he still required another card. He had made the call holding only one card (even with action to follow behind his call).

“He turned over a queen. The floor was called, and the all-in player argued that the button's hand should be dead as all the action had been completed, and he was not holding two cards.

“The floor ruled the player was to be dealt the card off the top of the deck, which was the card he would have been given anyway. The card was dealt, and the button turned over an ace, for ace-queen.

“He consequently won the hand and knocked the other player out who left the table shaking his head while the rest of the players at the table just sat there looking baffled. I'm not sure whether the ruling was correct or not, but I am even more confused about the risk calling holding a single card that wasn't even an ace!”

At least, he was awake when he made the call.

“One late night, when I was playing cash games in the Bellagio last Autumn, there was a poker player who couldn't stop himself from falling asleep at my table. Every time it was his turn to act, they had to wake him up.

“Then he suddenly fell asleep when he was in the middle of a pot. He woke up with a quick motion and proclaimed without looking at the hand or board "UUHM CHECK", and at that point the dealer said, “You either stay awake, or you leave the table.”

“We decided to buy him a coffee!”

They love a good cup of coffee in Paris. They also love a bit of “degen” gambling by the sounds of it.

“About eight years ago when the Aviation Club de France (ACF) was still thriving on the Champs-Élysées in Paris. I was playing a fairly friendly €1/€3 game and a local guy they called "The Eskimo" sat down. He routinely made it €40 pre with any two, then called a three-bet of virtually any amount with any two.

“Anyway, an hour or so after he sits down, he makes his standard €40 open, then gets three-bet to €160. He calls. The flop is K56, and both players check. The turn is a brick, and they both check for a second time. The river is an eight. Now this guy fires out €200. Eskimo makes it €500; then the other guy says something in French to the Eskimo. They talk to the dealer, who calls the floor, and the long and short of it is this other guy had said to the Eskimo, “Do you want to bring more money to the table?"

“Apparently the floor allowed them to bring more money to the table that would go into play in the middle of this hand! Something I have never seen before, and something I'm pretty sure isn't allowed as standard.

“Anyhow this guy excitedly pulls out around €3k while Eskimo pulls out what looks like around €2k. So now this other guy announces, "Mille", which I recognise to mean, "a thousand". This guy is so confident of his hand that I can't believe Eskimo even agreed to reload.

“Eskimo kind of shrugs his shoulders and says, "All-In"; to which the other guy starts swearing in French and saying something along the lines of, "He has a straight!".

“Anyway, he quickly calls, Eskimo flips over 7-4 off-suit for the straight and this other guy slams over in disgust a set of kings, which he has slow played to the death.

"He gathers his things and leaves. Eskimo looks around. I chuckle, and he simply shrugs his shoulders again, almost oblivious to what had just happened."

It sounds like that pair laid it all on the line. Or did they?

We will leave this little period of reminiscing in the capable hands of the man who started it - Neil Channing. The hand involves Keith Lehr, and Keith definitely laid it all on the line…

"Keith Lehr was playing $10/$20 NLH at The Bellagio. He went all-in. The guy asked him if that was all-in, and if he had any other money? Keith confirmed he was all-in.

"Keith puts his fingers up to his eye, pulls his glass eyeball out of its socket and places it into the pot.

That’s the word from the pros. Now it’s your turn.

What Are The Most Incredible Scenes You Have Witnessed at The Poker Table?

Lee Davy is a poker writer and live reporter who has worked for all the top names in the industry, including the WPT, the WSOP as well as 888poker.
Related Content
Chip Protectors and Card Guards – Luck on the Line

Make Sure You Know these Top 7 Tips before Heading to Vegas!